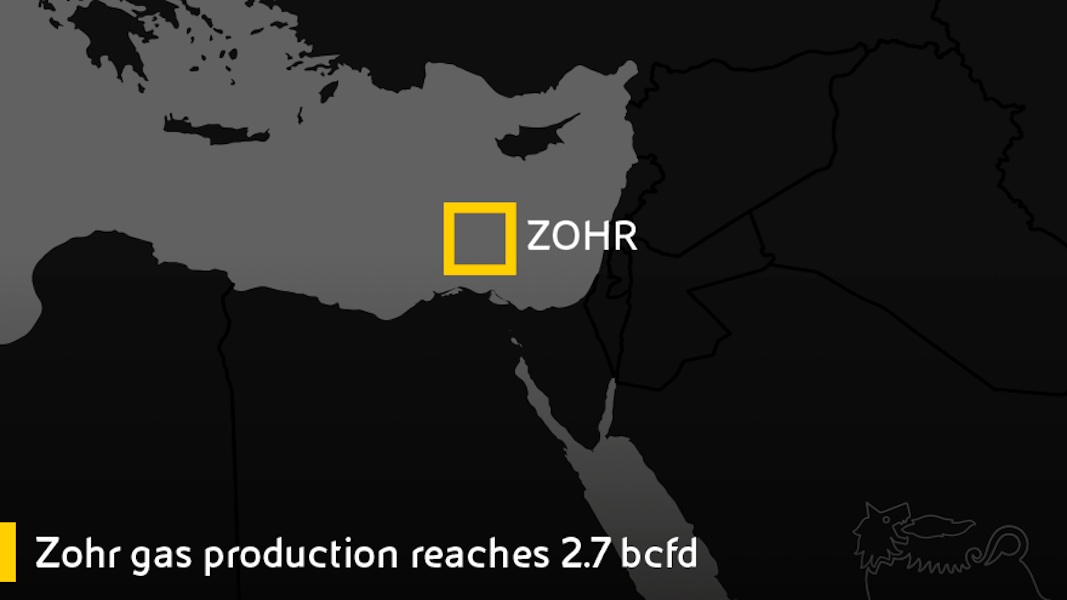 Eni expects to boost production from its Zohr offshore gas field in Egypt 3.2 billion cubic feet per day by the end of the year, after reaching 2.7 bcfd five months ahead of schedule.

Eni released a statement on Wednesday, in the wake of a Reuters which cited Egypt’s energy minister who said Zohr had reached 2.7 bcfd production level four months ahead of schedule and would reach 3 bcfd by the end of the year.

In its statement, Eni said the production from Zohr field “has now reached more than 2.7 billion cubic feet per day (bcfd), about 5 months ahead of the Plan of Development (PoD).”

Italy’s Eni discovered Zohr, Egypt’s largest-ever gas find, back in 2015, and brought in online in 2017.

Petrobel, a company jointly held by Eni and the state corporation EGPC, is operating the project. Other partners in the project are Rosneft, BP, and Mubadala Petroleum.

The Italian company in September last year said it had reached a 2 bcfd production target at Zohr, with the aim to achieve a “plateau in excess of 2.7 bcfd in 2019.” Eni has recently lifted its Zohr plateau target to 3.2 bcfd.

The Zohr field, the largest gas discovery ever made in Egypt and in the Mediterranean Sea with more than 30 tcf of gas in place, is located within the offshore Shorouk Block (some 190 km north of Port Said).

Commenting on the latest production milestone, Eni said: “This remarkable result has been achieved following the completion of all eight onshore treatment production units – the last one commissioned in April 2019 – and all Sulphur production units in August, the production start-up of two wells in the southern culmination of the field (in addition to the ten wells already drilled in the northern culmination) as well as the start-up on August 18th 2019 of the second 216 km long 30” pipeline connecting the offshore subsea production facilities to the onshore treatment plant.”

According to Eni, the new pipeline, in conjunction with the completion and optimization of the plant treatment capacity, paves the way to increase, by the year-end, the field potential production rate up to 3.2 bcfd against the POD’s plateau rate of 2.7 bcfd.

In February, Egypt’s petroleum ministry said the field’s production stood at 2.1 bcfd. The government aims to raise production to 3 bcfd by the end of the year.

The minister, Tarek al-Molla, said in a statement that the current production level was reached four months ahead of schedule. There are now 12 wells in production in the field, the statement said.

Zohr was discovered in 2015 by Italy’s Eni and began output in late 2017. It holds an estimated 30 trillion cubic feet of gas.

Eni controls 50% of the project. Kremlin-controlled Rosneft owns 30%, while BP and Mubadala Petroleum each have a 10% stake in Zohr.