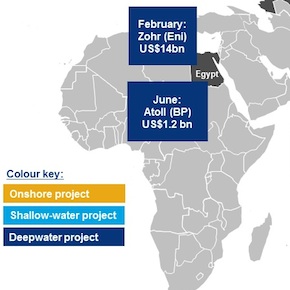 By Angus Rodger
Upstream investment in new projects has stepped up a notch over the last few weeks. A final investment decision (FID) has now been taken on six major developments through 2016 – including four in June and July. These projects account for a combined US$67 billion in capex and over seven billion boe in reserves. So does this signal the bottom of the cycle and we’re entering a new, more investment-positive phase?

We think that it’s still too early to call the next cycle. But these decisions do shed some light on a number of interesting changes in the way companies are approaching new project investments. They have all been extensively reworked to cut cost, they are all fundamental to operators’ strategic priorities, and they have all been screened against stringent new economic criteria.

They share other similarities. There is a weighting towards developments near to or within existing infrastructure (‘brownfield’) versus  pure ‘greenfield’. This is positive for project economics, and also reduces execution risk. The six projects that have progressed have large operator interests – three have operator stakes of 100%. It is easier to push forward a large investment in these difficult times when there is less ‘partner-drag’.

That is not to say the industry has chosen the path of least resistance- these are certainly not cheap or easy projects to commercialise. Sour gas reinjection, HP/HT, ultra-deep reservoirs and remote locations are just some of the technical challenges operators will face.

And this brings us to the other key point. Better cost management has helped cut costs by up to 30% and allowed these projects to proceed. But improved project delivery will be critical to reaping these benefits of contracting at the bottom of the cycle. The execution of major developments over the last decade has been poor, and this has to change. More time has been spent up-front in pre-FID engineering work to reduce the risk of project execution issues. Project redesign and re-phasing have also been  key factors in the cost reduction process.

So what exactly is ‘project re-design’? Well, generally its short-hand for ‘make smaller’. As we entered 2015 and the industry reset its near-term price expectations, many pre-FID projects were sent back to the drawing board to be re-engineered for a lower-for-longer type environment.

This had become necessary because they had been designed to be profitable in a US$100/bbl world, and were simply not competitive or attractive in a sub-US$50/bbl setting. 2014 projects’ tended to have large footprints and designs focused on recovering as many barrels from the reservoir as possible.

Recovering the marginal barrel is no longer profitable. So projects have been optimised through reducing the number of wells, less subsea kit and less topside processing capacity. We’re also seeing more use of leased FPSOs rather than new builds, and more subsea tiebacks to existing hubs, over greenfield developments. Right-sizing these projects results in less overall barrels being recovered but, with a far lower project capex; the barrels that are produced have lower breakeven and are profitable under lower long-term planning prices..

Re-phasing has some similarities. Here the operator bins the traditional front-loaded big spend – intended to facilitate maximum field output as quickly as possible – and instead invests in a smaller-scale first-phase. The intention is to build up production in a far more incremental fashion, slowly adding additional pieces of infrastructure and wells, with the key benefit being reduced upfront capital spend.

There are some reasons to be optimistic. Project economics are certainly getting better, due to the actions discussed above, alongside concurrent industry cost deflation. These have allowed average rates of return (IRR) for projects targeting FID over the next 18 months to rise to between 15-20% at US$70/bbl, which places them well within the tougher screening hurdle rates that are now in play.

But companies will be cautious about committing to new projects with Brent drifting back down to US$40/bbl. Balance sheet management and living within means is still very much front of mind for oil and gas operators; we calculate that the companies in our Corporate Service need oil prices of around US$55/bbl in 2017 in order to achieve cash flow neutrality. Pushing back pre-FID projects to free up capital will be a priority without a recovery in prices, even though returns have improved.

We expect a handful of projects to progress over the next six months for strategic reasons. But it won’t be until the second half of 2017 – when we forecast rising Brent prices – that the next investment cycle can slowly start accelerating again as confidence returns to the sector.