Winteshall Dea switches its Mittelplate platform to be powered by renewables 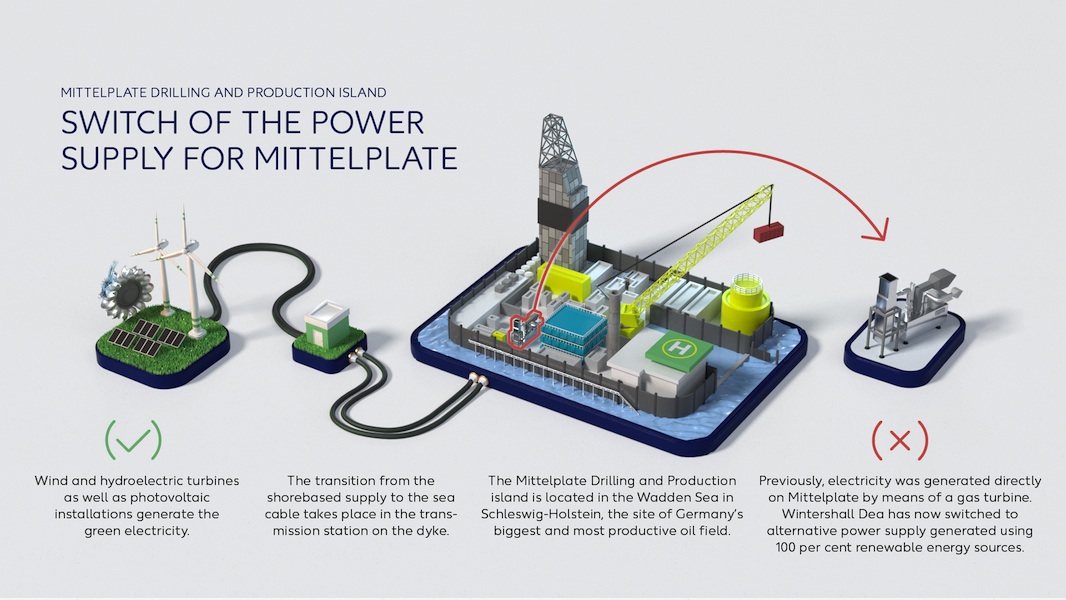 Wintershall Dea has switched the power supply to the Mittelplate Drilling and Production island in the Schleswig-Holstein Wadden Sea National Park to 100-percent certified electricity from renewable sources. This makes Mittelplate the first oilfield in Germany to be produced solely with green electricity.

“Through an innovative technological approach, we were able to stop generating electricity with a gas turbine and switch to green electricity from shore. Hereby we save up to 36,000 tonnes of CO2 annually and significantly reduce our ecological footprint in this sensitive natural environment,” said Wintershall Dea’s Chief Technology Officer Hugo Dijkgraaf: “The changeover to electricity from renewable sources also represents a further step in implementing Wintershall Dea’s strategy to consistently reduce emissions that are harmful to the climate,” he added.

“The use of green electricity is an important step in an ongoing process towards achieving even greater ecological sustainability and environmental protection – and it won’t be the last,” stressed Dirk Warzecha, Head of Wintershall Dea’s Business Unit Germany, at today’s symbolic switch event on the dyke in Friedrichskoog: “By acting responsibly and using state-of-the-art technology, we will ensure that crude oil production and environmental protection in the tidelands off the coast of Friedrichskoog are compatible,” he added.

Previously, the electricity needed on Mittelplate was primarily generated using a turbine on the island that was driven by the associated gas extracted along with the crude oil. Wintershall Dea is discontinuing power generation using the gas turbine and will now get all its power from the mainland exclusively from renewable sources. That also applies to all the other facilities belonging to the Holstein Production District on the mainland, such as the treatment plants and offices in Friedrichskoog, as well as the landing stage in Cuxhaven.

Dirk Warzecha also announced that by 2021, Wintershall Dea will switch all the production locations in Germany to certified electricity generated from renewable sources.

About the Mittelplate oil field
Wintershall Dea has been producing crude oil from the Mittelplate field located in the Wadden Sea in Schleswig-Holstein for 33 years – safely and without incident. Thanks to state-of-the-art technology, highly qualified staff and complex monitoring and security systems, oil production and environmental protection are indeed compatible even in this sensitive ecosystem. With just under three million litres of crude oil produced daily, Mittelplate is Germany’s most productive oil field by far, and also represents an important driver for the economy and jobs on the west coast of Schleswig-Holstein.

About Wintershall Dea
Wintershall Dea is Europe’s leading independent natural gas and oil company with more than 120 years of experience as an operator and project partner along the entire E&P value chain. The company with German roots and headquarters in Kassel and Hamburg explores for and produces gas and oil in 13 countries worldwide in an efficient and responsible manner. With activities in Europe, Russia, Latin America and the MENA region (Middle East & North Africa), Wintershall Dea has a global upstream portfolio and, with its participation in natural gas transport, is also active in the midstream business.