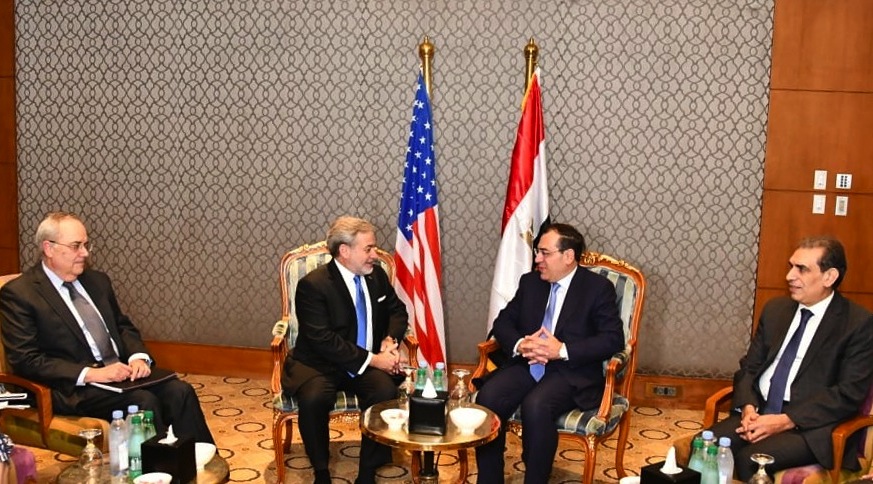 US Deputy Energy Secretary Dan Brouillette was in town last Thursday to launch the US-Egypt Strategic Energy Dialogue with Oil Minister Tarek El Molla and the head of the Electricity Holding Company Gaber El Dessouky. Brouillette unveiled details of the initiative, and discussed regional energy issues and Egypt’s role in the East Mediterranean with a handful of reporters, including Enterprise. We have details of the announcement and the roundtable discussion in this morning’s Speed Round below.

Brouillette’s stop follows his participation in the Abu Dhabi World Energy Congress, where a number of Egypt-related announcements were made. These include details on the sale of Dana Gas’ Egypt assets revealed by CEO Patrick Allman-Ward, which we dissect in the Speed Round. Oil Minister Tarek El Molla met up with Eni CEO Claudio Descalzi at the conference, where he reiterated the company’s desire to expand its investment in Egypt, the Oil Ministry said in a statement. The pair discussed Eni kicking the tires on exploration, marketing and distribution projects in Egypt. El Molla also met with representatives from ADNOC, who are interested in getting into selling car lubricants in Egypt, and representatives from Emirates National Oil Company to discuss supply airplane fuel. He also met with Schlumberger CEO Olivier Le Peuch to talk progress on establishing a database to market Egypt’s energy resources.

Egypt’s position as regional gas export hub for East Med gets US support: US Deputy Energy Secretary Dan Brouillette met with Oil Minister Tarek El Molla on Thursday in Cairo to discuss moving forward with the US-Egypt Strategic Energy Dialogue — a bilateral cooperation initiative aimed at strengthening Egypt’s energy production, storage and distribution capacity. The project, which came out of an MoU signed during US Secretary of Energy Rick Perry’s visit in July, seeks to capitalize on Egypt’s position as the regional gas export hub for the East Mediterranean Gas Forum countries and hopes to attract new energy investments, said Brouillette. Following the meeting, Brouillette held a roundtable with a select few news outlets, including Enterprise, to discuss the initiative and Egypt’s role in the region’s energy. The Wall Street Journal also had the story.

Dialogue to help encourage US private investment in Egypt’s energy sector: The US-Egypt Strategic Energy Dialogue aims to “facilitate closer government and private sector cooperation on energy between the United States and Egypt,” according to an official statement. “We’re going to be working through this dialogue, to not only attract US investment here in the region, but also to do technology transfer and sharing from our national laboratories of the Department of Energy,” Brouillette said. The dialogue will see the two countries “cooperate on a number of shared areas of interest across the energy sector, including but not limited to enhancing energy trade, clean coal technology, carbon capture utilization and storage, bio-economy, energy efficiency and renewable energy, green building technologies, smart grids, and energy capacity building.” The two sides will get together to set the framework for the dialogue “very soon” but have yet to set a date, Brouillette said, hoping to be back in the region within 2-3 months to continue talks.

Brouillette said that the launch of strategic energy dialogue demonstrates US support for Egypt’s plan to become an energy hub as well as the East Mediterranean Gas Forum (EMGF). “We do see this forum as a key component to not only energy security in the region, but overall security in the region,” the official said.

East Med Gas Forum is important to global energy competition: In response to questions on whether the East Med Gas Forum will hurt Russian influence as a natural gas exporter, Brouillette said: “We want competition in the marketplace. We’ve talked to the Europeans, we’ve talked to others who are interested in buying natural gas not only from the US but from other parts of the world.” He added that the move would also benefit consumers who would in turn benefit from better pricing.

Challenges getting gas to Egypt, including security, remain but are “solvable”: The security situation in North Sinai has disrupted plans for Egypt to begin importing natural gas from Israel as part of a USD 15 bn agreement signed last year, Brouillette told reporters, including Enterprise. Infrastructure plans of a pipeline to connect the two countries have been delayed by security threats in the region where Egypt is fighting Daesh. Israel should’ve begun exporting natural gas to Egypt in March based on two binding agreements that would’ve seen the latter receive supply from its neighbor via Dolphinus Holding. “I do think the security issues factor into this,” Brouillette said, adding however that he thinks those security challenges are “solvable.” Oil Minister Tarek El Molla said last week that Egypt expects to begin receiving natural gas from Israel by the end of the year.

US to lend a helping hand in getting Turkey off the back of the East Med Gas Forum: The US has been in talks with both the Turkish and Cypriot governments and have shown Turkey that they were “not supportive of the efforts that they have ongoing,” Brouillette said, adding that his country is working on reaching a resolution. He is of course referencing the two years of bullying and threats made by Turkey that any agreement to extract gas from Cyprus must include Turkish Cyprus.

What could Egypt be doing to attract more US investments? “I think they’re doing a lot of what they need to be doing,” said Brouillette. “They’ve stabilized the market to some degree internally, they’ve indicated a willingness to do more development, which is also important. That indication usually attracts investment.” Brouillette said investors, especially multinationals, want “certainty” and reliable contracts, something Egypt has already been able to provide. Egypt has attracted USD 30 bn in investments in its energy sector, which contributes 25% of the country’s GDP, El Molla said in a statement.

We had to ask a Trump administration official if we can hope for US support in renewable energy: “There are several US companies that are interested in investing in [Benban], we want to put them in contact with the right folks here in Egypt,” Brouillette told reporters. The US is keen to work with the Egyptian government on technology transfer of battery storage. “We think that’s an important part of [Egypt’s energy] diversity and security here in the region.”