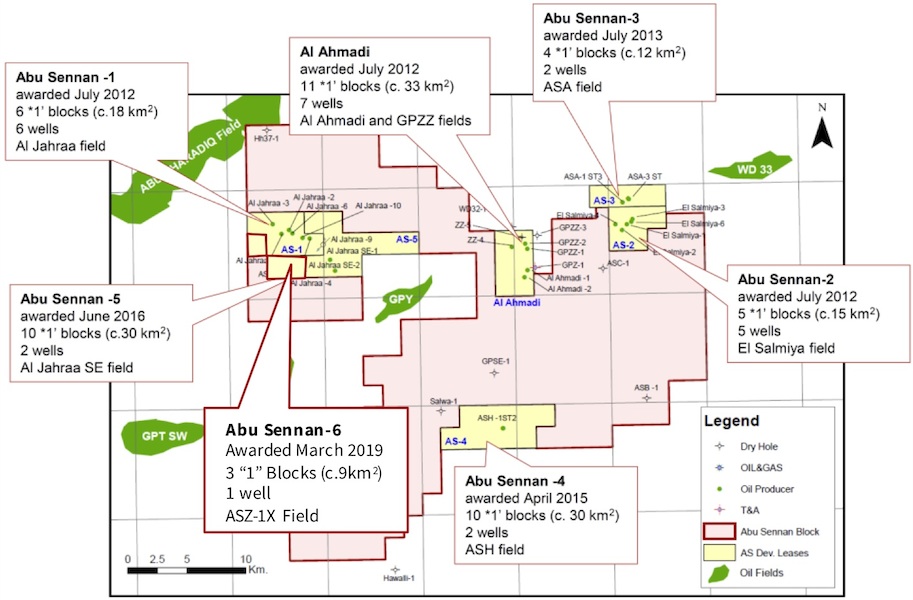 Following the announcement on 20 December 2019, issued pursuant to media reports in Egypt, ASH-2, which was drilled to a total depth of 4,030m in the Alem El Buieb (AEB) Formation, has been completed to allow selective production from both an upper and lower reservoir interval. The upper and lower intervals were tested separately at maximum gross rates of 7,027 and 3,851 bopd respectively.

ASH-2 came on stream on 2nd January and has been consistently producing at over 3,000 bopd (660 bopd net to Rockhopper’s 22% interest) on a 32/64″ choke.  The well will continue to be monitored over the coming months, and during this period, the interpretation of the test data and the longer-term planning for the ASH field-development will continue with the joint venture partners and Egyptian General Petroleum Corporation (‘EGPC’).  The rig is currently being mobilised for the first well in the 2020 infill programme (El Salmiya 5) which is expected to spud shortly.

Since ASH-2 came on stream, gross production from the Abu Sennan licence has averaged c. 8,000 boepd, which equates to c. 1,760 boepd net to Rockhopper’s 22% interest.

Completion of the Acquisition

The Company is pleased to announce that the approval of the Deed of Assignment by EGPC and Minister of Petroleum and Mineral Resources of Egypt, is proceeding. The Deed of Assignment was signed by Rockhopper Exploration and United on 9 January 2020 and was submitted for EGPC and Ministerial approval on that date. The Company will announce an expected completion date as soon as this approval is received.

As previously announced, the consideration for the Rockhopper Acquisition is US$16 million (approx. £12.2 million) which is being funded by:

As the original Acquisition Agreement and BP Facility contained backstop dates of 22 January 2020 and  the Placing Agreements contained a 31 January 2020 backstop date, the Company, Rockhopper, BP and United’s Brokers (Cenkos and Optiva) have extended the backstop dates on all of these agreements until the end of February 2020, which the Company expects will provide sufficient time for approval of the Deed of Assignment and completion of the Acquisition.  In the meantime, the date for the admission of the Enlarged Ordinary Share Capital of United, comprising 619,153,969 Ordinary Shares, to trading on AIM has been deferred, and Admission is expected to take place during the middle of February 2020, (‘the Admission date’).

‘As the test results to date on the ASH-2 well demonstrate, Abu Sennan is a producing asset with considerable upside potential. At the effective date of the Acquisition (1st January 2019), production attributable to Rockhopper’s 22% interest in Abu Sennan was c. 800 boepd. Today it stands at c.1,760 boepd.  While the interpretation of the data is continuing, it is clear that the intersected reservoirs have excellent production capacity.  With this in mind, we are looking forward to completing this transformational Acquisition and working with our soon-to-be joint venture partners to optimise the field development plan for Abu Sennan. This includes a multi-well infill drill programme that is expected to commence shortly with the El Salmiya 5 well.

‘I would like to thank our existing shareholders, the incoming investors and BP who continue to support what will be a transformational deal for our company. Together with receipt of environmental approval for the development of the Selva Gas field in Italy and the extension of the Tullow-operated Production Sharing Agreement on the Walton Morant Licence offshore Jamaica, 2020 has got off to an excellent start. I look forward to providing further updates on our progress in the weeks and months ahead.’