TransGlobe to drill 8 development, 5 exploration wells in Egypt this year 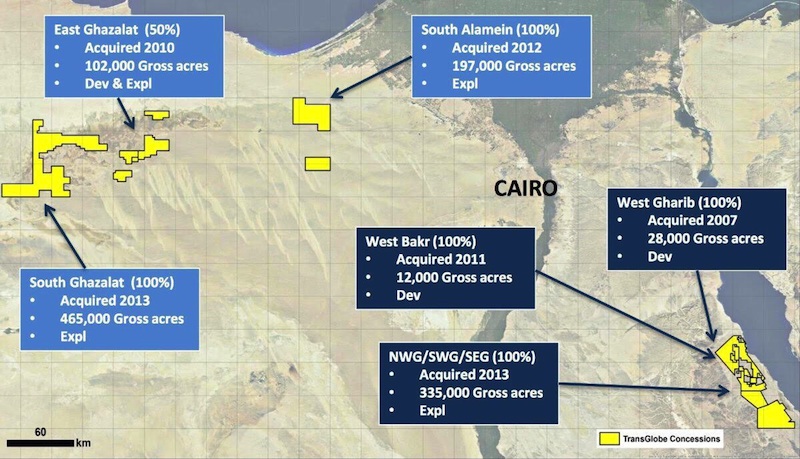 TransGlobe Energy Corporation, an independent international upstream oil and gas company with exploration and production operations in the Arab Republic of Egypt and Canada, confirms its intention to seek a listing on AIM to enhance liquidity for the Company’s shareholders and provide more direct access to the London capital markets.

Application has been made for the Company’s existing 72,205,369 common shares to be admitted to trading on AIM. It is expected that Admission will become effective and dealings will commence on 29 June 2018.

TransGlobe is an independent international upstream oil and gas company with headquarters in Calgary, Canada, whose main business activities consist of the exploration, development and production of crude oil and natural gas liquids. The Company currently has exploration and production operations in the Arab Republic of Egypt and Canada. In Egypt, the Company currently holds a 100% interest in six PSCs: West Gharib, West Bakr, NW Gharib, South Alamein, South Ghazalat and NW Sitra. Canadian operations are in west central Alberta, Canada, where the Company owns production and working interests in certain Cardium light oil and Mannville liquids-rich gas fields in the Harmattan area. As at 31 December 2017, the Company had total proved plus probable gross reserves of 45.9 MMboe and average production in Q1 2018 was 14,375 boe/d. Canadian production is weighted approximately 60% light oil and liquids and 40% natural gas.

TransGlobe believes it is well positioned with a producing asset base and established working relationships within Egypt and cash flows from both its Egyptian and Canadian business units.

The Company’s strategy and objective is to leverage its strong asset base and balance sheet to build a diversified, profitable and growth oriented international portfolio of assets capable of generating cash-flow and building shareholder value over the long term.

The Company’s goal is to grow the Group’s annual cash flow through exploitation, development, exploration and acquisitions.  The Company’s acquisition efforts will target opportunities where the Group can leverage its operational and technical strengths with a primary geographic focus on Egypt as well as the Middle East, Africa and Europe.

In 2018, the Company expects to drill 8 development and up to 5 exploration wells in Egypt and 6 development wells in Canada.  The Company’s 2018 budgeted capital programme of US$41.3 million (before capitalised G&A) includes US$29.1 million for Egypt and US$12.2 million for Canada. This programme is balanced to anticipated funds flow from operations using a US$55/bbl Brent oil price forecast.

The Company has set full year average production guidance for 2018 at between 14,200 and 15,600 barrels of oil equivalent per day.

The Directors believe that the Company’s key strengths include:

“A listing on AIM will make it easier for us to introduce the TransGlobe story to a wider audience of investors in the UK, Europe and South Africa.   The Company will be establishing an executive office in London this fall in order to increase our exposure to this investor market and to enhance our business development efforts.

We believe that our strong balance sheet, material production base with exploration upside, and 22 years’ experience of operating successfully internationally makes TransGlobe ideally suited to the London capital markets.”