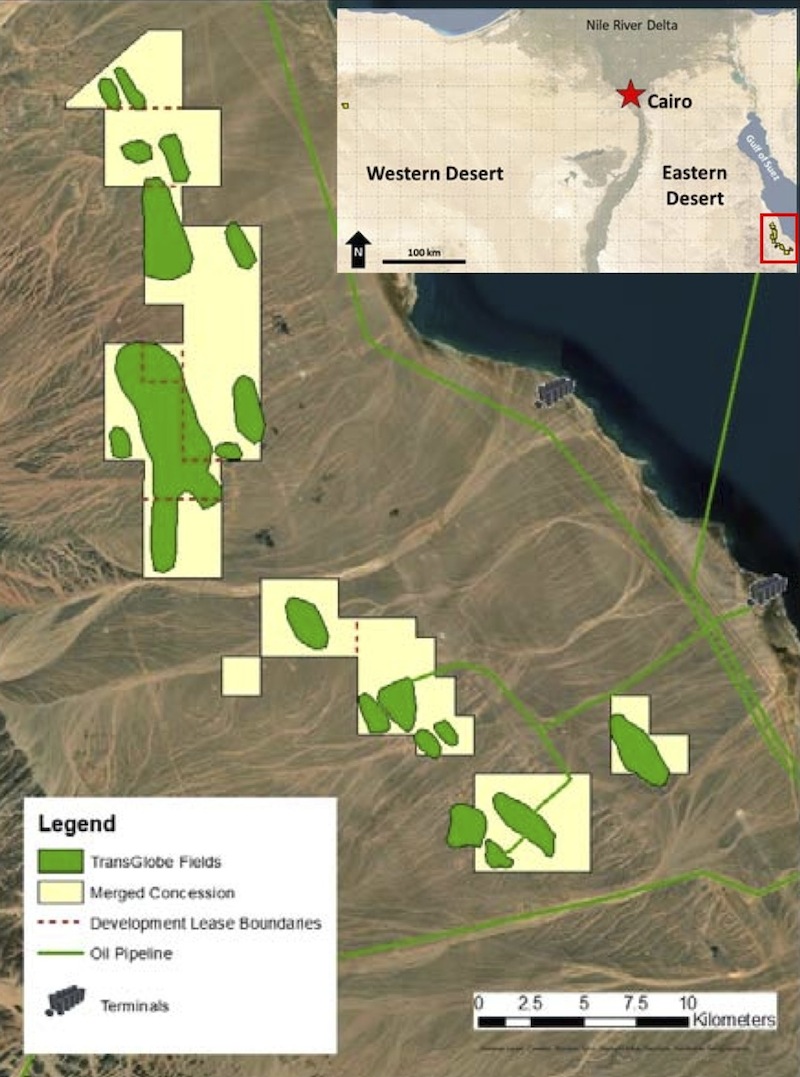 TransGlobe Energy Corporation announced it has reached an agreement with the Egyptian General Petroleum Corporation (“EGPC”) to merge the Company’s three existing Eastern Desert concessions (the West Gharib, West Bakr and North West Gharib concessions) into a new modernized concession agreement (the “Merged Concession” or “Agreement”). The Agreement is subject to the usual Egyptian Parliamentary ratification and the satisfaction of other closing conditions.

KEY ELEMENTS OF THE MERGED CONCESSION

Randy Neely, President and CEO stated, “After a lengthy and constructive negotiation, I believe we have arrived at an incredible win-win amendment for both TransGlobe and EGPC. The efficiencies gained from the consolidation of our Eastern Desert concessions, along with the improved netbacks and extended term, are expected to provide TransGlobe with the fiscal incentive and time to unlock meaningful additional reserves and production through the application of modern technology and optimization of infrastructure. This will also allow us to move forward with important ESG initiatives to improve our environmental footprint as well as continue to be a major employer in the Ras Gharib region for the foreseeable future.

We intend to continue to manage the finances of the Company with a conservative approach and expect that, under a reasonable range of oil prices, the Company will be able to fund the equalization payments and a continuous capital investment program from existing resources and cash flows. In addition, as soon as practicable, direct returns to our shareholders will be prioritized.

This Agreement is a critical first step in achieving our stated goal of becoming a leading independent Middle East/North Africa region cashflow-focused energy producer. The Merged Concession will provide the platform to allow us to increase our efforts on completing complementary mergers and acquisitions to further support this objective.

We appreciate the commitment and vision of the leadership team at EGPC to extending the life of these mature oil fields and we look forward to working closely with them to realize the significant mutual benefits of this Merged Concession. In the immediate future we will begin to plan for increased activities that should in the near to medium term arrest and reverse recent production declines.”

BACKGROUND TO THE AGREEMENT

In 2017, H.E. Eng. Tarek El Molla (Minister of Petroleum & Minerals) announced a Modernization Initiative to try to increase oil production and reserves by 20% from existing oil pools (brownfields). Since that time, TransGlobe and EGPC have been discussing ways in which TransGlobe could increase recoveries and production from its existing producing fields and have worked extensively to evaluate various modernization fiscal structures to provide a framework for continued brownfield investment in TransGlobe’s Eastern Desert concessions.

Encouraged by the Ministry’s Modernization Initiative and positive discussions with EGPC, the Company identified a number of enhanced recovery and infrastructure efficiency projects targeting incremental oil recovery from existing pools in the concessions. Concurrently, the Company initiated detailed static and dynamic reservoir modeling of several of the larger pools to evaluate enhanced recovery strategies. Additional detail regarding these and other Contingent Resources disclosed in this news release are available below under “Advisory Regarding Oil and Gas Information”.

New investable projects will target a Company Gross risked best estimate incremental 59.1 million barrels of Economic (Development Pending/ On Hold and Development Unclarified) Contingent Resources through drilling, increased operating efficiencies and the application of new technologies over the 20 year term (15 year primary + a 5 year option period). These Contingent Resources are separate from our existing Proved plus Probable reserve base in the eastern desert which were estimated at 26.3 million barrels of oil (23.6 MMbbl heavy oil and 2.7 MMbbl light/medium oil) at 12/31/2019.

Investable projects are expected to arrest the historical production declines (~22% per year) and provide a stable production and cash flow base for the next five+ years with potential to grow and extend the life of existing fields. To date, of the 59.1 million barrels of risked Contingent Resources noted above, the Company has technically matured a Company Gross risked best estimate incremental 20.5 million barrels of Development Pending/ On Hold Contingent Resources from the Arta Nukhul, K-Field, and H-Field pools based on their respective dynamic modelling, the Merged Concession terms, and an estimated future capital investment of ~$125 million. With this announcement, the Company will prioritize the Arta Nukhul, H- Field, and K-Field pools’ resource maturation projects, which are expected to commence as soon as reasonably practicable. See “Advisory Regarding Oil and Gas Information” below for additional details.

In addition, the merged workforce of the existing joint venture operating companies provides the Company and EGPC with an opportunity to train, develop, and deploy an integrated workforce with enhanced operating capabilities to develop and operate other brownfields in the future.

The Merged Concession is expected to provide further incentive for the transfer of technologies, through horizontal drilling with multi-staged completions, routinely employed in our Canadian operations, possible tertiary recovery techniques, and also the opportunity to pursue a number of infrastructure investments to increase operating efficiencies.

In accordance with the Company’s ESG initiatives, the Company has identified several infrastructure investment projects such as displacing diesel power generation in the field with reliable power from the national power grid which are expected to increase efficiencies, reduce operating costs, and significantly reduce GHG emissions. The national power grid has been expanded throughout the merged area, including connection to the substantial, new renewable wind power projects in the region.

Significant additional benefits are expected to accrue to Egypt, the Red Sea Governorate and the city of Ras Gharib through additional investments, operating costs, and the associated employment of the local workforce necessary to extend the life of the existing fields.