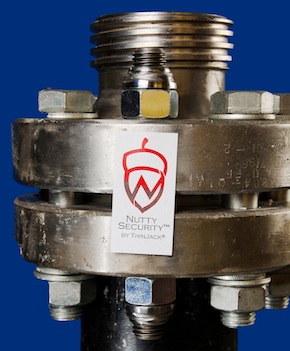 New technology from leading Aberdeenshire-based oil service company ThinJack Ltd has received a warm welcome at its unveiling to the Egyptian market.
The company, which has a global reputation for riglessly separating seized well flanges, recently held the Egyptian launch of NuttySecurity™ at the Egypt Petroleum Show (EGYPS), in Cairo. The technology is being delivered in collaboration with representatives Yadco Petroleum Services in Cairo, Egypt.

NuttySecurity™ is a wellhead theft deterrent which is described as: “the oilfield and industrial equivalent of car wheel security nuts.”  Offering a single kit to cover the same bolt/stud size on several wells, the system offers significant cost savings compared to the re-purchase of just one stolen gate valve.  Other benefits include a reduction in the likelihood of both oil pollution (due to unauthorised valve removal) and production loss, as well as cost savings in re-installation and pressure testing.  There is a focus on the “chain of custody” of the equipment delivered, providing additional re-assurance to customers.

Commenting on the launch, ThinJack Ltd Managing Director Guy Bromby said: “After seven months of development, we are delighted to bring the latest addition to our portfolio to the market.  NuttySecurity™ is developed from raw, but well considered, entrepreneurial spirit and was initially designed for the Nigerian market, but it could be deployed anywhere in the oilfield countries where wellhead or industrial plant security is a concern.  Currently, wellhead parts are stolen and then re-sold as scrap metal creating pollution, production loss and the costs of equipment re-procurement, re-installation and testing.

“Customers have thanked us for delivering a solution which deters thieves, creating optimism that thousands of barrels per day of lost oil production is not compulsory, whilst helping protect the environment and their local communities from pollution.  Our alliance with Yadco Petroleum Services, which is a world class company in Cairo, has enabled the swift rollout of this technology, and we look forward to supporting them.”

Mr Mostafa Ghalwash, General Manager of Yadco Petroleum Services, commented: “NuttySecurity™ is ideal for helping to protect wells in remote places, with minimal existing security infrastructure such as in Egypt’s Western Desert.  As with ThinJack Ltd’s rig well flange separation services for the Gulf of Suez, which improve oil integrity and Egypt’s domestic hydrocarbon production, we look forward to the continuation of the support which we began with ThinJack Ltd in 2013.”