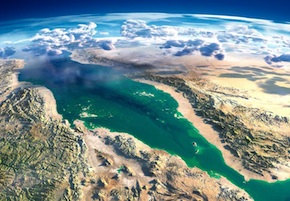 The Red Sea remains underexplored but one of the world’s most intriguing areas for hydrocarbon exploration compared to the Arabian Gulf, home to Saudi Arabia’s Safaniya and Qatar and Iran’s joint gas field North Field and South Pars.

A key difference between the Gulf and the Red Sea is water depth. The Arabian Gulf is one the world’s shallowest seas with depths rarely exceeding 100 m. The Red Sea has depths of up to 10 times that figure.

Challenges include its rough seafloor topography, complicated geology under thick salt deposits and its pristine ecosystem. In addition, drilling costs can be a deterrent, with the average deepwater rig cost at about $600 million.

Even Saudi Arabia, which already has vast petroleum resources, has been slow to tap its Red Sea potential although the basin may be one of the last great exploration frontiers for the kingdom. Still, the Red Sea is on its radar.

Saudi Aramco was the first to use a deepwater rig in the Red Sea region after a 15-month seismic study in 2009indicated the presence of natural gas. The company discovered three oil and two gas fields in 2013and started developing the gas fields. However, work was halted in 2015 due to several factors, including environmental issues, costs and the need for further studies to minimize risks.

In early May 2017, Magseis said it had completed the initial part of the seismic survey and started working on the previously agreed extension of the work.

Meanwhile, the African side of the Red Sea has been largely overlooked by the industry.

In Egypt, the densely explored Gulf of Suez and natural oil seeps surrounding the Red Sea prove a working multi-petroleum system at the northern and southern Red Sea province and mainly a syn-rift to post-rift petroleum system at the central Red Sea province. Since 1974, a total of 28,350 km of 2-D seismic data and 4,360 km of 3-D seismic data have been collected, and 12 test wells have been drilled through the various concessions, according to Sherif Sousa, CEO of Ganoub El-Wadi Petroleum Holding Co.

In 2010, Sudan started drilling its first offshore exploration well in the Red Sea off Sudan with the help of CNPC. The well falls in Area 15, which is operated by Red Sea Petroleum Operating Co. The company is a consortium comprised of CNPC, Malaysia’s state oil firm Petronas, Sudan’s state oil firm Sudapet, Nigeria’s Express Petroleum and Sudanese firm High Tech Group. Petronas and CNPC each have a 35% interest in the block.

In Eritrea, oil seeps were recorded around Dahlac Islands, but a number of undeveloped discoveries have been made offshore the country.

“The hydrocarbon exploration history of the Eritrean Red Sea goes as far back as early 1920 s when the Italian firm Societa Mineraria Del Africa Oriental, undertook the drilling of a well to few hundred meters depth,” said Teklehamanot Debretsion, head of energy and hydrocarbons for Eritrea’s, Ministry of Energy and Mines. Eritrea also has taken on exploration activities, including drilling 12 deep and 11 shallow wells and acquiring 40,000 km of 2-D seismic data, he said.

In addition, the country is working on reforms to attract investment, Debretsion continued. This includes making changes to the tax regime and royalties.

Canadian Oyster Oil and Gas Co. is taking the lead in Djibouti, where there has been little exploration activity. Currently, the company is conducting exploration work in four blocks, including one offshore). The company is targeting a possible extension of the Red Sea Basin into the block, following discoveries made offshore Saudi Arabia, Egypt and Sudan.