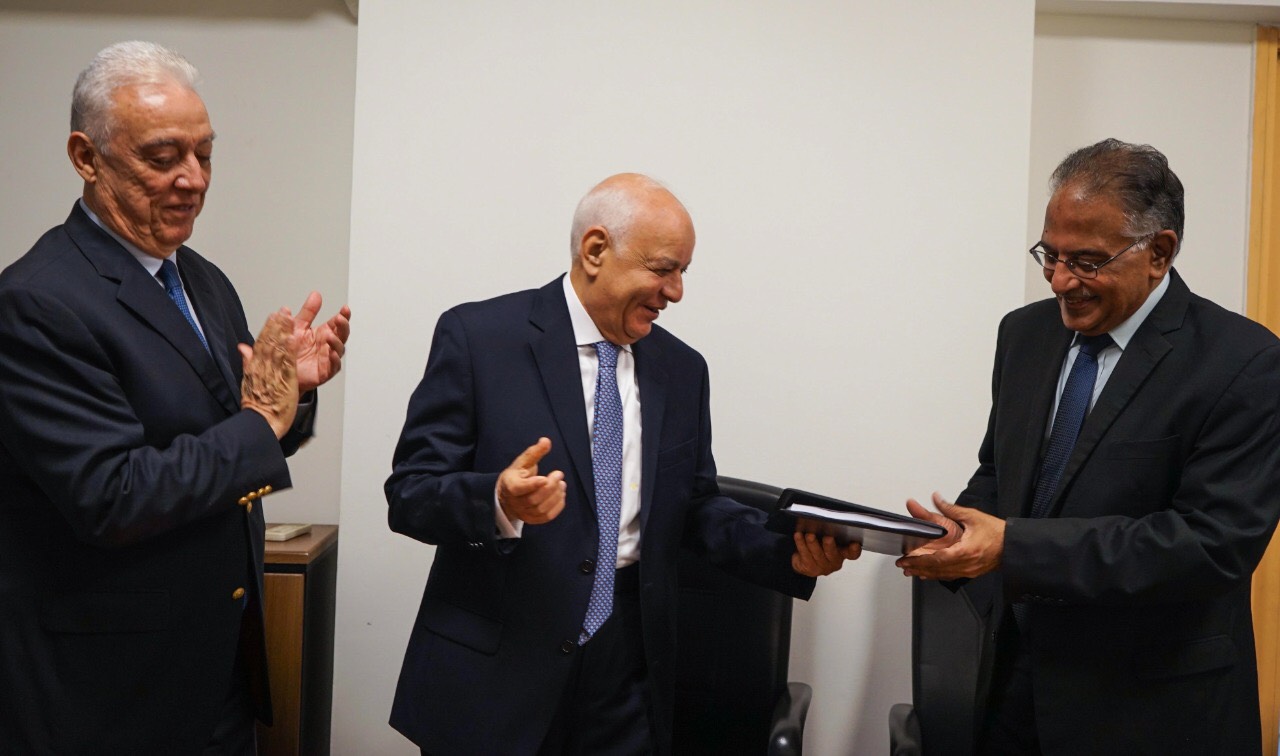 ● Jayaraman: This year marked a significant milestone for TCI Sanmar to overcome challenging times and develop customized and innovative products and technologies to suit the complex needs of its customers

● Kumar: Thanks to our state-of-the-art technologies and consistent value creation, TCI Sanmar enjoys a powerful reputation and prominent position as the largest integrated producer of Caustic Soda and PVC in the entire MENA region.

TCI Sanmar Chemicals, the largest producer of caustic soda in Egypt and the largest manufacturer of Polyvinyl Chloride in the MENA region, announced the official release of its fourth sustainability report entitled “Road to Green Production”, which was developed in accordance with the Global Reporting Initiative (GRI) Standards, and in alignment with the United Nations’ Sustainable Development Goals (SDGs) and the national sustainable development strategy ‘Egypt Vision 2030’. During a top management meeting the report was released, and Mr. P.S. Jayaraman presented the report to H.E. Eng. Sameh Fahmy, former Minister of Petroleum and Major General Mustafa Al-Behairy, who are also Board Members of TCI Sanmar, in the presence of Mr. S Ganeshkumar, Managing Director of the company.*

The report highlighted the remarkable achievements made by TCI Sanmar as part of its sustainable performance during the FY March 2022. It indicated all round improvement in the performance of the company aligned with adoption of high environmental standards. The report records reduction of carbon footprint as also water consumption in comparison to the previous year’s operations. It referred to adding a renewable energy course to show the company’s commitment to sustainable development guidelines from a capacity building perspective as well as from best practices application.

On this occasion, P.S. Jayaraman – Chairman, TCI Sanmar Chemicals, expressed pride of the breakthroughs and achievements made during the year 2021- 22, which he described as an ‘extraordinary’ year.  “This year marked a significant milestone for TCI Sanmar. The company managed to overcome challenging times, which included overall cost increases particularly in freight and transportation, lower production of Polyvinyl Chloride (PVC), due to technical issues that cropped up in Vinyl Chloride Monomer (VCM) operations. However, we have managed to turn operations around and develop customized and innovative products and technologies to suit the complex needs of our customers”

“We understand that our customers seek more sustainable solutions, thus, we successfully introduced two more PVC grades: K value 57 (K-57) for fittings and K value 70 (K-70) for cables. With the ongoing production of K value 67 (K-67) for pipes, the company is now manufacturing all three PVC grades. This goes a long way to meet and exceed customers’ expectations.” he added.

Mr. Jayaraman concluded to pledge on implementing a new development philosophy effectively and robustly to achieve sustainable development in harmony with the environment, society, and stakeholders.

Furthermore, the report underscored TCI Sanmar’s future plans under its sustainability strategy, and shedding light on environmental, social, and economic aspects given the crucial need to integrate them within it’s the company’s functions.  The report also highlighted the urge for waste reduction and lowering emissions in order to minimize the environmental impact of chemical processing and manufacturing and ensure the maximum level of human and environmental protection.

The report positioned TCI Sanmar at the forefront of companies adapting to green, sustainable production within its operations. The company became the first in the MENA and African region to tap into unconventional ways to produce fossil fuel-dependent PVC. It also became the first petrochemical industry to issue an environmental product declaration for PVC.

It is worth mentioning that TCI Sanmar is one of few petrochemical companies in the MENA region that publishes an annual sustainability report, in compliance with the GRI standards and guidelines.

TCI Sanmar is the largest Indian investment in Egypt with USD 1.5 billion (foreign direct investment). The company manufactures three main products, namely: Polyvinyl Chloride, Caustic Soda, and Calcium Chloride. Importantly, TCI Sanmar is considered the largest manufacturer of Polyvinyl Chloride in the Middle East & North Africa region that happens to be a key product used in infrastructure development, which is one of the most vital economic growth engines around the world. The company uses non-fossil fuel based raw material namely Bio Ethylene  partly in manufacture of PVC and thus is the only producer of Green attributed PVC in the world. Additionally, TCI Sanmar manufactures all the three grades of PVC that have varied commercial applications, as well as other products that serve the Egypt strategic needs, such as Chlorine and Sodium Hypochlorite.