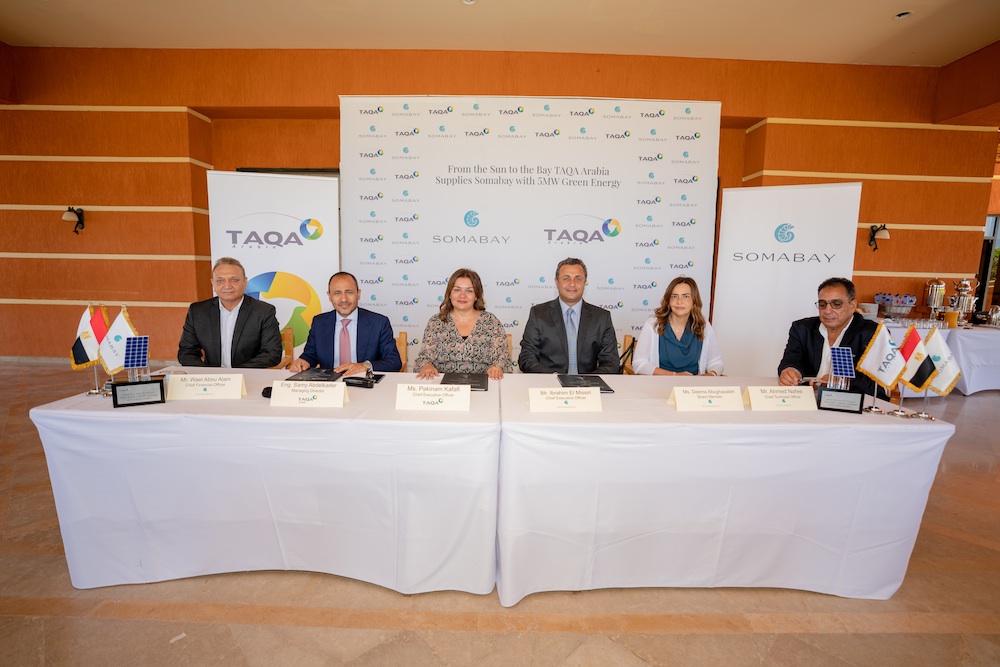 On this occasion, Somabay’s CEO, Ibrahim El Missiri, has expressed great pride in the project by saying: “This has been a longtime coming as it coincides with Somabay’s vision of connecting with nature and looking after it. This 10 million m2 peninsula south of Hurghada, which harbors an exquisite recreational sandy beach along its 11KM coastline requires special care. Hence, our motto is “Outstanding by Nature”, and this necessarily entails that we work to reduce our carbon footprint.”

In turn, TAQA Arabia CEO, Pakinam Kafafi stated: “I am proud to witness the Egyptian private sector’s increasing awareness with regards to environmental causes. I would specifically like to give due credit to the Tourism sector for its interest in exploring new prospects and expand their energy spectrum to include renewable resources. Our agreement with Abu Soma Touristic Development to establish 2 “PV” power stations in Somabay showcases an admirable level of commitment on our client’s part. The designated investments amount to approx. USD 4 million.”

Kafafi also declared: “TAQA Arabia, a Qalaa Holdings Company, has been working diligently for many years towards becoming a fully-integrated energy & utility provider. Our strategy goes hand in hand with the Egyptian government’s vision, in terms of expanding our renewable energy portfolio in order to meet the needs of more potential customer segments.”

Managing Director of TAQA Power, Eng. Samy Abdelqader clarified the benefits of the agreement by saying: “TAQA Power’s agreement with Abu Soma Touristic Development to build 2 solar power stations counts as a model for utilizing renewable energy and capitalizing on its economic value. In doing so, our clients stand to receive better value-for-money, as well as rely less on conventional energy.”

Abdelqader further elaborated on the project terms: “Our contractual agreement is bipartite: The first part is a PPA (Power Purchase Agreement); stipulating TAQA Power to invest in building & operating a PV station with the capacity of 3.8 MW, over the course of a 9-month period, and on the land owned by Somabay. Subsequently, TAQA Power is entitled to a concession management agreement of the aforementioned station for 30 years. The second part of the agreement is an EPC Contract “Engineering, procurement, and construction”; wherein TAQA Power is to design, deliver and install another PV station, with a 1.2 MW capacity, and then transfer its management to Abu Soma Touristic Development (ASDC). The total contracted capacity of both stations is up to 5 MW.”