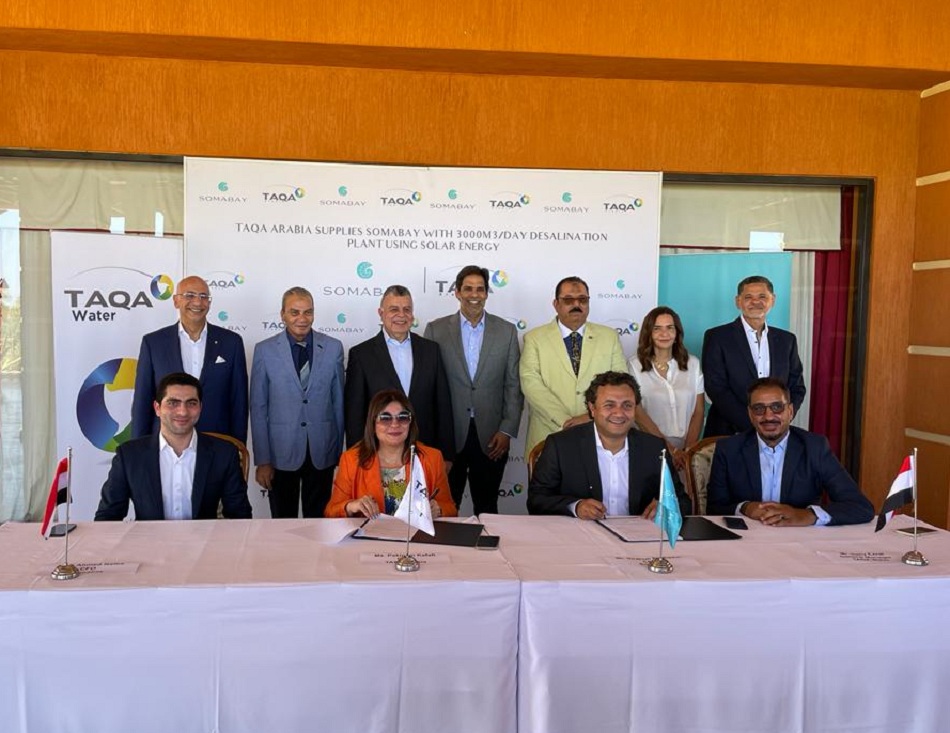 The PV solar station’s agreement was signed 9 months ago through which TAQA Arabia was able to successfully execute the project within the assigned time frame. The project aims to generate electricity from solar energy & expand the use of renewables in order to minimize the dependance on conventional electricity at a reduced cost and a higher efficiency as well as minimizing the carbon footprint.

On this occasion, Mr. Osama Saleh, Chairman of the Board of Directors of Abu Soma Tourism Development Company stated “Soma Bay’s vision is aligned with Egypt’s 2030 strategy for sustainable development, having one of its main pillars the transformation of clean energy and the development of the green economy”.

From his side Eng. Khaled AbuBakr, Executive Chairman of TAQA Arabia, said :“The new venture is another step towards the country’s vision of diversifying the energy sources and expanding the use renewable energy resources.

Eng. Ibrahim El-Missiri, CEO of Abu Soma Tourism Development Company, said: “I’m proud to witness the success of the PV solar station project in collaboration with our outstanding partner TAQA Arabia. This exquisite project comes in alignment with Somabay’s vision of sustainable development, as the project will largely reduce operational costs on the long run.”

He also added: “Our primary objective is to generate the required power using solar energy to reduce electricity and water desalination costs. this project will greatly contribute to the expansion of the energy spectrum in the tourism sector to include renewable resources, all of these endeavors aligns with Egypt’s vision to explore and diversify the energy resources.”

Pakinam Kafafi, Chief Executive Officer of TAQA Arabia, stated: to complement the mutual vision of sustainable development between both TAQA Arabia and Somabay, TAQA Arabia will establish a water desalination and treatment plant on the premises of somabay, using the electricity generated from the PV solar stationand the latest energy saving technology to rationalize the consumption of energy resources. Being the full-service energy & utility provider TAQA Arabia has pioneered in merging water desalination projects using renewable energy In pursuit of reaching the maximized sustainability.

Somabay is a prime touristic destination situated on the Red Sea coast (just 20 minutes’ drive from Hurghada International Airport and only a 4 hours flight from Central Europe). Nestled on 10 million square meters, the self-contained community of Somabay is surrounded by sea on three sides. The resort site boasts some of the most beautiful sandy beaches of the Red Sea and panoramic views of desert mountains. Home to 5 luxury resort hotels and a signature portfolio of residential properties, in addition to world-class golf courses and yachts marina.

TAQA Arabia, a Qalaa Holdings Company, is the full-service energy & utilities provider in Egypt, serving more than 1.7 million customers with their daily energy needs. TAQA Arabia invests, installs, constructs, and operates energy infrastructure including gas transmission and distribution, conventional and renewable power generation and distribution, marketing oil products and lubricants throughout several retail fuel stations across the country as well as providing water desalination and treatment services for a wide range of clients. Throughout its subsidiary “Master Gas”, TAQA Arabia operates extensive number of CNG stations and conversion centers across the country as well as providing off-grid customers with Mobile CNG services, making TAQA Arabia a one-stop-shop for all energy and utility services in Egypt and the region.