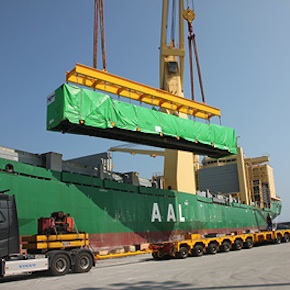 The modules for the first heat recovery steam generator (HRSG) for the Siemens Mega project in Egypt have begun their journey from South Korea to the Beni Suef power plant. On its arrival in mid-September, the boiler is scheduled to be installed at the plant. NEM, as part of Siemens, is delivering a total of 24 HRSGs for this Mega project, which includes three 4.8 gigawatt turnkey combined cycle power plants in Beni Suef, Burullus and New Capital. In total eight boilers will be installed in each plant.

The modules for the first HRSG begin their five week journey at the port of Ulsan in South Korea in the Sea of Japan, where it will be loaded into a heavy lift vessel. From there, it will be shipped after a short stop at Tanjung Langsat Port in Malaysia to co-load main steel and casings for the same project to the Port of Adabiya on the Red Sea. Onshore, the several ton cargo will be transported to the natural-gas-fired combined cycle power plant in Beni Suef. This plant will be powered by eight Siemens SGT5-8000H gas turbines, selected for their high output and efficiency. In each of the eight HRSGs the exhaust gas from these turbines will be used to produce high-pressure steam and drive the four steam turbines installed in the power plant.

The overall NEM project scope for the three combined cycle power plants include engineering, manufacturing and delivery of 24 vertical triple-pressure reheat once-through HRSGs. This type of HRSG was chosen for its fast and flexible startup and relatively light weight and small footprint. Each boiler contains 24 modules and approximately 14,000 single tubes, each around 20 meters in length. If all the tubes of all the boilers were placed end to end they would span a distance of about 6,700 kilometers. That is equivalent to twice the distance between NEM headquarters in Zoeterwoude, the Netherlands and the power plant Beni Suef, Egypt.