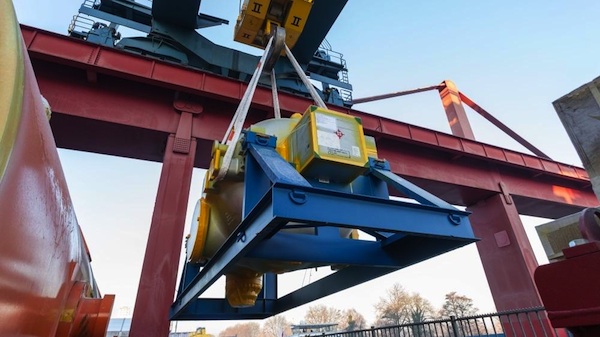 The biggest comes for last – Final steam turbine for the Egypt Megaproject leaves Muelheim.
482 days ago Siemens started the shipment of its first H-class gas turbine for the Egypt Megaproject. The first component for the first power train at the Beni Suef facility left cold Berlin and was installed in sunny Egypt. Much time has passed since then. In June 2017, Siemens is shipping the last components of the overall twelve power trains: The last generator headed for the construction site on the 1st of June, followed by the last gas turbine one day later. Today, the last heavyweight steam turbine for the New Capital facility leaves the Siemens site in Muelheim, Germany.

Transporting the Eiffel Tower to Egypt

It will be a long way for the steam turbine until it reaches its destination in New Capital, 45 km east of Cairo. To get from Muelheim to New Capital, you just need a few hours using the plane. But it takes several weeks to travel the approximately 7,000 kilometers by land and sea route. And the shipped steam turbine consists of more than 5,000 individual parts and weighs about 670 tons – it can’t be transported as hand luggage. The cargo is lifted with a heavy-duty crane from the Muelheim production hall onto a transport vessel standing by at the plant’s inland harbor facilities. The vessel will transport the SST-5000 steam turbine from Muelheim to the deep-water port of Antwerp where it will be loaded onto a heavy cargo ship and transported to Egypt.

In just five months Siemens transported twelve steam turbines weighing 8,000 tons to Egypt. It sounds quite impressive to transport a cargo heavier than the steel construction of the Eiffel tower, but the twelve steam turbines just take a minor part compared to the 1,040,000 tons of materials used to erect the power plants in Beni Suef, New Capital and Burullus.

Siemens together with its local partners is building three combined cycle power plants with an overall installed capacity of 14.4 gigawatts. The steam turbines will play a decisive role to generate this huge amount of electricity and optimize the fuel consumption of the plants. The steam turbines increase the overall efficiency of each power plant, which means simply that it needs the same amount of gas to generate more electricity. Statistically, a single H-class gas turbine can provide electricity for around 1.4 million Egyptians. Combined with a steam turbine, the gross power output is enough to provide electricity for more than 2.1 million people – assuming a baseload operation & average energy consumption of ca. 2,281 kWh/capita in Egypt in 2018.

It won’t take another 482 days until the combined cycle power plants in Beni Suef, New Capital and Burullus will provide energy for up to 45 million Egyptians. The last steam turbine from Muelheim will arrive in a couple of weeks and by 2018, Siemens and Egypt will have advanced the history of the vibrant country.