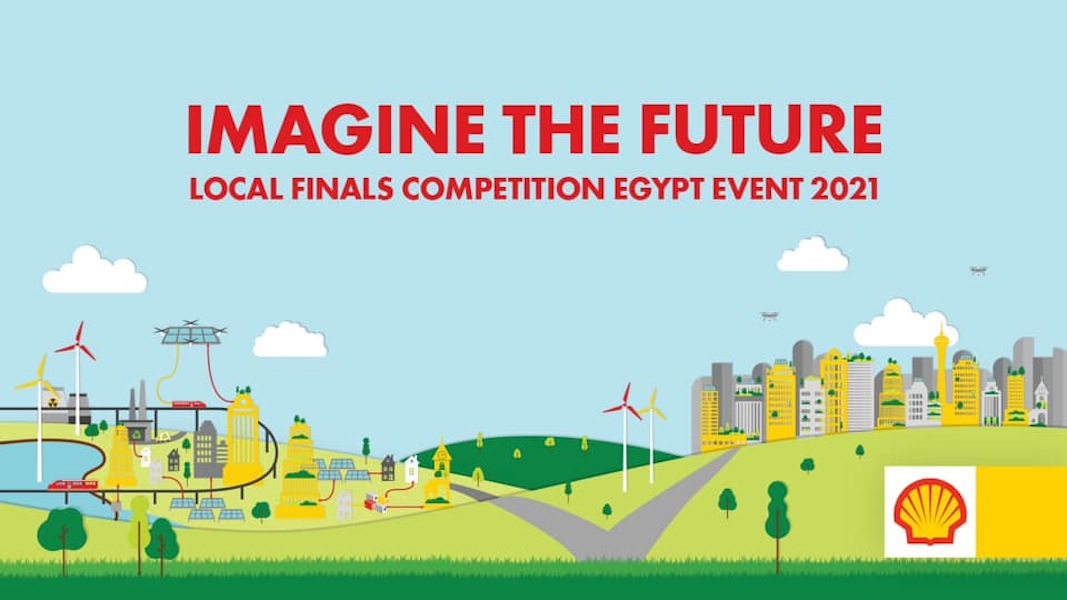 Shell Egypt celebrated the announcement of the winning team in the final phase of “Imagine the Future” local version: The American University in Cairo’s team “AUC-07”. The team will represent Egypt in the “Imagine the Future” global competition, taking place virtually on the 26th of August 2021. This is the fourth time that Egypt qualifies to the global “Imagine the Future” competition, organized by Shell Global in the Asia Pacific, Middle East and North Africa region. The AUC-07 team has won this year’s contest, with their project revolving around the city of Alexandria in the year 2050.

“Imagine the Future” aims to encourage students’ creative thinking, where they envision the future of cleaner energy by developing scenarios that meet current and future challenges, in order to provide more efficient, cleaner energy in Egyptian cities by 2050.

On this event, Eng. Khaled Kacem – Shell Egypt’s Country Chairman and Managing Director has stated: “The “Imagine the Future” competition is considered as a major challenge for all participating students, as the nature of the competition helps students create future scenarios, based on current facts. Shell Egypt is keen on offering opportunities to the Egyptian youth, and perhaps “Imagine the Future” competition is a concrete proof of this keenness, as we are creating a platform that allows a huge number of students to apply their innovative ideas to build a better future for Egypt.”

He also added: “Personally, I consider this competition as one of Shell Egypt’s most important programs, as it opens new horizons for the participating students, using critical thinking and has become a prerequisite for any entrepreneurial idea that they want to come up with, in their future.”

Shell Egypt always seeks to cooperate with successful and reliable partners, which is why it has been consistently cooperating with Nahdet al-Mahrousa. Furthermore, the competition’s jury included members from different prominent entities, which are: Nahdet Misr Publishing House, Transcendium, The Federation of Egyptian Industries, the International Labor Organization (ILO), Shell Lubricants Egypt, and EGAS. The competition has started with 61 teams, until it reached its final stage, which included 6 Egyptian teams.

On this occasion, Nashwa Saleh, Shell Egypt’s Social Investment Manager said: “The “Imagine the Future” competition is not just a competition between university students, but we consider it as a platform that allows us to train and coach a young generation that is fully capable of analyzing the present, in order to build the future.” She also added: “This platform that Shell Egypt provides is a huge opportunity for Egyptian students, as more than 800 participants joined throughout the competition; and the teams chose different Egyptian cities in the scenarios they created, which builds a better future for Egypt.”

Furthermore, Alaa Hashim, Co-Founder and Executive Partner of Transcendium, and member of the competition’s jury, has expressed his joy in attending this event: “The quality of the students’ scenarios, presentations and videos were amazing, as this competition has offered to a whole generation of students the opportunity to critically think about the future, and apply multidisciplinary thinking in scenario-building; which is a very valuable skill for students to use in their professional careers later on.”

Additionally, Dalia Ibrahim, CEO and Chairperson of Nahdet Misr Publishing House, and member of the competition’s jury, said: “This year, the level was quite competitive with students demonstrating their ideas for different cities with different perspectives; which is not an easy task, adding to having to defend their scenarios and perspectives. I am really proud of the effort they made this year.”

The winning team has shown their happiness in claiming the local title for “Imagine the Future”, and their excitement in representing Egypt in the global competition: “It is a great honor to represent Egypt in the Imagine the Future Global Competition, reaching the competition’s final round was the result of the team’s huge effort, especially due to the geographic limitations that we had as a team.  Moreover, we would like to thank Shell Egypt and its partners for their support and guidance starting from the application process until we reached the global finals. We hope to achieve significant success at the global competition in through an honorable representation of Egypt, reflecting the Egyptian youth’s potential amongst other countries”, said Lara Shaheen, AUC-07 team Leader.

“Imagine the Future” was launched in Egypt to encourage students to be creative and find solutions that could lead the country to cleaner energy consumption.

Shell also supports local skills development, young entrepreneurs and in turn the local economy through the development of small projects and entrepreneurship initiatives like Shell Intilaqaah, the Shell Eco-marathon, Al-Amal programme and Shell’s partnership with AUC V-Lab to develop startups in the field of energy and environmental sustainability, and enhance the national economy.

To watch the Local Finals competition, please click on the following link.