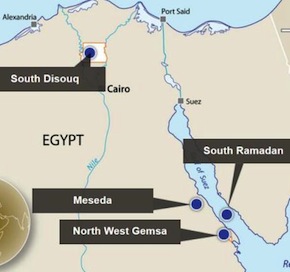 SDX Energy reported income of US$26.9 million for the first quarter of the year, although this was largely based on its acquisition of Circle Oil’s Egyptian and Moroccan businesses, which provided a US$29.5 million gain.

Netbacks from production for the period, meanwhile, were US$6.1 million, generating US$3.1 million of net cash.

Setting out its results on May 19, the company said production from Egypt’s North West Gemsa and Meseda assets had provided 1,904 boepd and 646 bpd respectively, while Morocco contributed another 441 boepd.

SDX completed the acquisition of Circle on January 27, for US$28.1 million.

“We were pleased to announce a successful drilling result at South Disouq, making a gas discovery in the first target and encountering reservoir horizons and evidence of a working petroleum system at the second target,” said SDX’ president and CEO, Paul Welch. “We have also made strong operational progress in Morocco and given the attractive local gas market, [we] are on track to drill seven additional wells this year to further grow our high margin production in the region.”

On the Meseda asset, SDX reported that a six-well workover programme had been completed, intended to improve future production. The company also acquired a two-phase separator for the project, which is being shipped to the block from the United Arab Emirates. A tender for six electrical submersible pumps (ESPs) was launched and these should contribute to increased production in the third quarter of this year.

On the South Disouq licence, the company drilled the SD-1X exploration well, making a gas discovery but failing in its hopes for a deeper oil find. Despite this, the well did demonstrate that a working petroleum system was present. Testing on the gas discovery is planned, while the company is also working on development ideas, with the aim of achieving commercial production by the first quarter of 2018. Furthermore, it has not abandoned its hopes for the deeper oil potential in the area.

SDX intends to drill a well on the South Ramadan concession in 2018 and has asked the government for an extension to allow this work to proceed.

In addition to the Morocco plans, SDX also intends to carry out a substantial work programme in Egypt. A 12-well workover programme is planned on North West Gemsa, continuing its ESP installation work, intended to improve future production at the site.

On Meseda, it plans to drill two development wells and two exploration wells, in addition to its ESP work and waterflood programme.

The statement went on to make it clear that its acquisition of Circle’s Egyptian and Moroccan assets were not the end of its ambitions, noting it was interested in further expansion in North Africa.