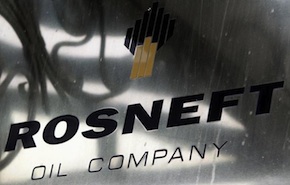 Board to consider buying 35 percent stake in Eni’s project in Egypt.
Russian oil firm Rosneft said it was interested in an offshore concession in Egypt. Rosneft said in a separate statement that its board plans to discuss buying a stake of up to 35 percent in Egypt’s offshore Shorouk concession, on Wednesday.

It did not disclose a value for the stake and Italy’s Eni, which controls the concession, declined to comment.

The concession includes the supergiant Zohr gas field, which was discovered by Eni in August 2015 and is the largest natural gas field ever found in the Mediterranean, with a total potential of 850 billion cubic metres of gas.

Last month, Eni agreed to sell a 10 percent stake in the concession to BP for $375 million and the pro-quota reimbursement of past expenditures, which so far amount to around $150 million.

“The BP deal is a proxy, valuing the whole of the field at $5.25 billion,” said Jason Kenney, oil analyst at Santander.