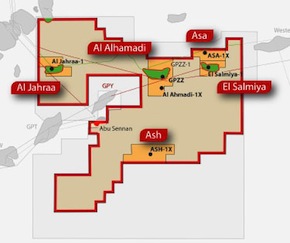 Rockhopper Exploration plc, the oil and gas company with key interests in the North Falkland Basin and the Greater Mediterranean region, is pleased to announce the commencement of the 2017 drilling campaign on the Abu Sennan Concession in Egypt in which the Company has a 22% working interest.

The well will target the Cretaceous Abu Roash-C reservoir in the fault block immediately to the south of the Al Jahraa South East discovery location where, if successful, it could add over 20 mmbbls of STOIIP to the development lease.

The well is anticipated to take approximately 40 days to drill and evaluate, and in the success case would be immediately completed as an oil producer.

Following completion of the Al Jahraa SE-2X well, the rig will move to the Al Jahraa-9 location to drill a development well which will target the AR-C reservoir at a location deeper than the current deepest oil penetration at Al Jahraa-4. The aim will be to demonstrate the connection between the Al Jahraa and Al Jahraa South East fields through the oil leg.

In addition, the operator has proposed two work-over operations during Q2 2017.

The outcome of the above programme will inform partner discussions regarding  appropriate activities in the second half of the year.

“We are pleased to start this drilling campaign on our Egyptian acreage and hope it will enable us to build further on our local production and resource base. We look forward to updating the market on progress in due course.”