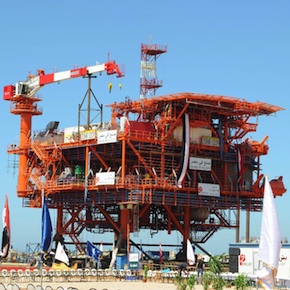 Petrojet company managed to complete manufacturing the offshore platform of Zohr gas field four months before the due date, Petrojet said in a Saturday statement.

Chairman and Managing Director of Petrojet Salah Ismail inaugurated the platform, which weighs about 6,000 tons and was manufactured at Petrojet’s marine manufacturing yard in Alexandria.

The inauguration was preceded by a meeting that brought together officials from the companies of Petrojet and Petrobel.

The meeting included a short presentation of the yard’s history and the key projects that have been carried out there since its establishment.

In May, Minister of Petroleum Tarek El-Molla said Zohr gas field will be connected to the national gas grid in its first phase before the end of 2017.

Egypt targets the production of 2.7 billion cubic feet per day from Zohr by 2019, which is equivalent to half of the country’s current gas production.