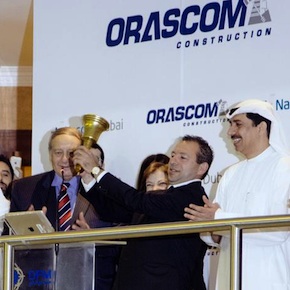 The company would carry out full civil works for the plant, which is based at Walideya, close to its existing power plant project in Assiut.

The contractor Orascom Construction has signed a contract worth US$100 million to build a new steam turbine power plant in Egypt.

The Abu Dhabi-based company, whose shares are listed on Nasdaq Dubai, said it would carry out full civil works for the plant, which is based at Walideya, close to its existing power plant project in Assiut. It said that this would “facilitate efficient mobilisation” to this site.

Orascom said it is now building plants with a total capacity of 11,000 megawatts (MW), including the two biggest combined cycle power plants in the world.

In May, Orascom Construction revealed a 22 per cent year-on-year increase in net profit for the first quarter this year to $28m on the back of a 9.5 per cent rise in revenue to $1.07 billion.

Sales at its MENA operations climbed by 15 per cent to $594.8m on the back of a growth in infrastructure work in Egypt.

The company’s chief executive, Osama Bishai, said the company had added $387.4m worth of new projects to its backlog.

“Part of our new awards in Egypt includes a second water desalination plant, demonstrating our leadership in a sector we believe will experience increased demand,” Mr Bishai said. “Furthermore, our large infrastructure work in Egypt continues to progress on track as we simultaneously expanded operations in the roads and water sectors.”

Despite this, the company’s backlog (including its 50 per cent share in Besix) fell by 15.5 per cent to $6.8bnas it completed work faster than it managed to replace it.

Orascom Construction Limited (NASDAQ Dubai: OC; EGX: ORAS) announces that it has signed a contract to build a steam turbine power plant with a capacity of 650 MW in Walideya, Egypt for a total value of approximately USD 100 million.

Orascom’s scope encompasses the full civil work of the power plant. In addition, the project’s proximity to Orascom’s existing power project in Assiut will facilitate efficient mobilization to site.

This new contract emphasizes the Group’s position as a leading player in the power construction sector. Orascom is currently building power plants with a total capacity of 11,000 MW, including the two largest gas-fired combined cycle power plants in the world.

Furthermore, Orascom continues to demonstrate its ability to set new global benchmarks in the fast-track execution of power projects, positioning the Group well for new opportunities in Egypt and the region.