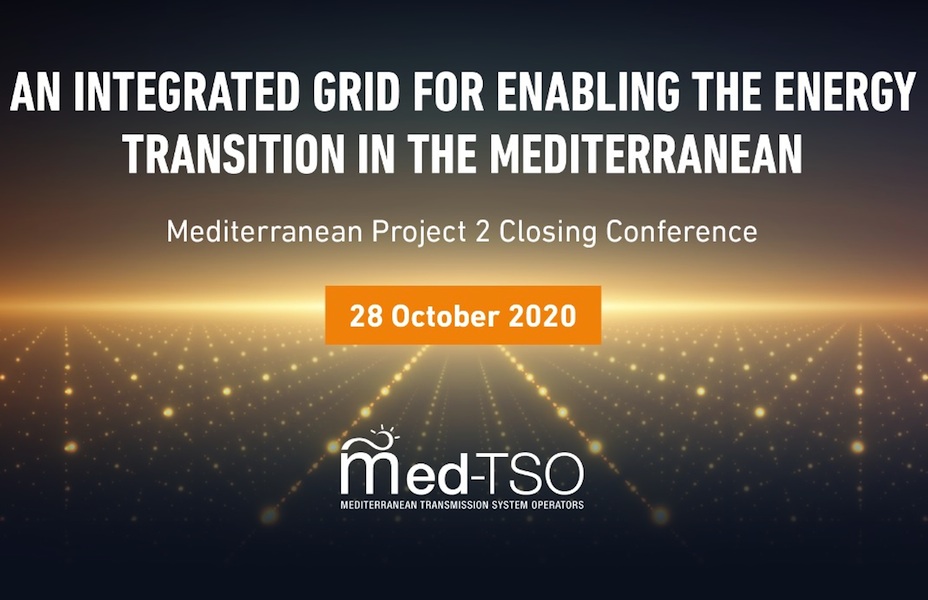 Med-TSO presents the results of Mediterranean Project 2: An Integrated Grid for Enabling the Energy Transition in the Mediterranean

On October 28, Med-TSO held a closing conference in honour of its Mediterranean Project 2 (MP2), which has officially come to an end after being successfully operative for two years. The event, titled ‘An Integrated Grid for Enabling the Energy Transition in the Mediterranean,’ was held via web conference and presented a comprehensive view of the project to institutions and stakeholders, including results of its activities, projections for the future, and a panel discussion with some of the Mediterranean energy scene key players.

The President of Med-TSO, Chaher Boulakhras, welcomed attendees with a commencement address, before passing the floor to Jean Michel Glachant, Director of the Florence School of Regulation, moderator of the virtual event, who introduced a select group of keynote speakers. These representatives, from high-level EU institutions, Energy Ministries of Egypt, Tunisia and Algeria, and main Stakeholders, lead the opening presentations. Fabio Massimo Castaldo, Vice-President of the European Parliament, started this round of statements talking about the necessity of a clean energy transition in the Mediterranean and remarking that energy cooperation is one of the most prominent aspects on the international diplomatic agenda.

The Egyptian Minister of Electricity and Renewable Energy of Egypt, H. E. Mohamed Shaker, centred his speech on the energy transition in Egypt, highlighting the importance of developing regional grid of interconnections in support of sustainable development and asserting that the Egyptian electricity sector is based on the gradual transformation of the current traditional network to a smarter one.

“Algeria and the Energy Transition” was the title of the speech given by H.E. Chems Eddine Chitour, Minister of the Energy Transition and Renewable Energies of Algeria, explaining that the Algerian government’s aim is to move to a new energetic model, focusing particularly on renewable energies and energy efficiency.

After that, Belhassen Chiboub, Director General of Electricity and Energy Transition at the Ministry of Industry, Energy and Mines of Tunisia, took the virtual stage to also speak about the energy transition in his country, warning about the growing scarcity of primary resources like fossil fuels, the increasingly difficult access to them and how renewable energies are the main pillar of this energy transition because of their abundant, clean and inexhaustible resources.

The EU Green Deal was the main topic in the speech from Cristina Lobillo-Borrero, Director to the Energy Policy of European Commission DG ENER, in which she highlighted that it is not only a strategy to face climate change but is also a strategy for long-term growth  – that is already being implemented – and how Med-TSO can greatly contribute to that.

Keisuke Sadamori, IEA Director for Energy Markets and Security, closed this round of speeches, talking about the role of IEA in the Mediterranean Region, arguing that in the future, whichever path the energy system follows, growth will come dominantly from variable renewables when flexibility from conventional power plants declines.  He also warned that investments in the power sector were declining even before the Covid-19 outbreak.

With these insights, the conference was primed for the presentation of the outcomes of MP2. The Secretary General, Angelo Ferrante, gave an overview of the project that aimed to increase energy security and reliability, improve system efficiency across the region, generate economies of scale through investments and operations and improve the collaboration and knowledge sharing across the Mediterranean TSOs.

Emmanuel Bué, Convener of Med-TSO Working Group Economic Studies and Scenarios, presented Med-TSO 2030 scenarios, where possible future situations of energy in the region have been explored, while Modesto Gabrieli, Francescato, Chairman of Med-TSO Technical Committee Planning, gave all the details of the second Mediterranean Masterplan of Interconnections, in which 15 future interconnection projects have been assessed.

The Secretary General of the Association also took this opportunity to present the launch of a new project, TEASIMED, acronym of Towards an Efficient, Adequate, Sustainable, and Interconnected MEDiterranean power system. While MP2 and its predecessor MP1 established guidelines, rules, and methodologies for the integration of power systems in the Mediterranean, TEASIMED represents the next step in the process and is expected to initiate the implementation of pilot projects and operational cooperation across the region.

INTEGRATION OF THE MEDITERRANEAN GRIDS

Following the outcomes portion of the event, the web conference moved onto a panel discussion with leading voices across the region on the topic of “A stronger integration of electricity grids of both shores of the Mediterranean: opportunities, challenges, and concrete ways to progress.”

High-level Stakeholders shared their insights and expertise, like the Secretary General of UfM Nasser Kamel, who talked about the challenges and opportunities to enhance energy cooperation in the Mediterranean, stating that the Mediterranean region counts on unique conditions to develop renewable energies beyond the wind, sun and hydropower.

The President of MEDREG, Gülefşan Demirbaş, analysed the reasons why market integration is so important and talked about how cooperation can be a key factor to implement projects like this one. In his intervention, the President of ENTSO-E, Hervé Laffaye, presented the major trends in power systems towards 2030-2050, pointing out at the need for cross-continent coordination, cooperation and interconnection and highlighting the already existing excellent cooperation between Med-TSO and ENTSO-E.

PRIORITIES OF THE EUROPEAN COMMISSION

Finally, the event came to a close with remarks from Henrike Trautmann of the European Commission, who talked about the importance of continuing work on green energy projects and remarked the importance of the EU Green Deal. She also commented that she was looking forward to seeing the TEASIMED project advance. To conclude, the President of Med-TSO, Chaher Boulakhras, praised the collaboration between both sides of the Mediterranean and how, working side by side, they can create less costly solutions for the benefit of all the parties involved.

The successful web conference was an opportunity for Med-TSO to celebrate an important landmark for the Association, while continuing to offer its future vision to members and stakeholders. With the closing of each of its projects, Med-TSO is able to introduce the concrete steps to ensure progress towards an integrated and harmonised energy system across the Mediterranean region.