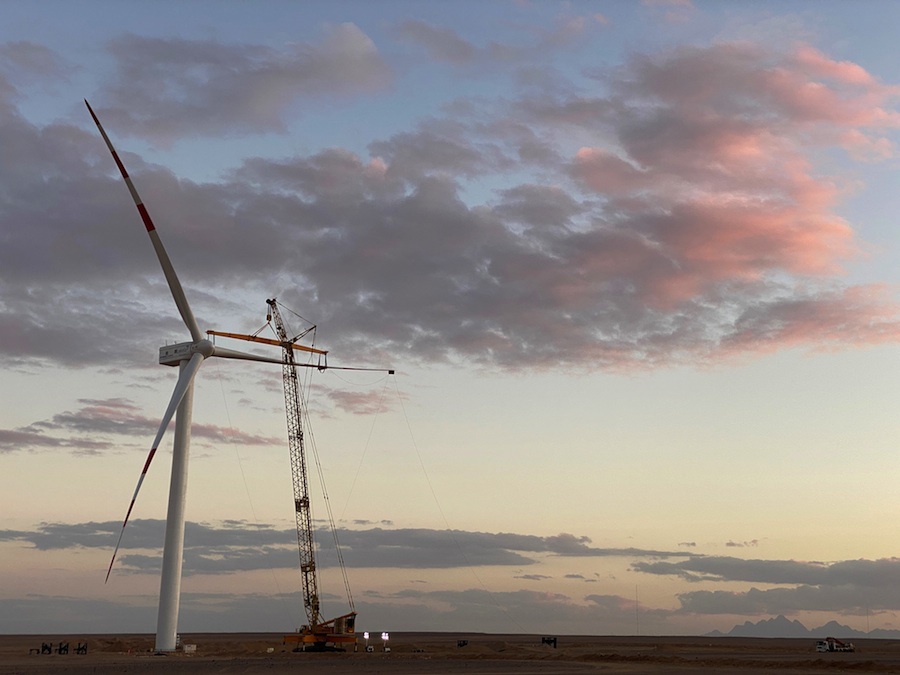 Lekela, the renewable power generation company that delivers utility-scale projects across Africa, today celebrates a landmark moment as the first 20 turbines at West Bakr Wind farm have now been successfully synchronized, with the wind farm now providing power to the grid.

Synchronization is an important step to completion of the project. Now that this milestone has been reached, the wind farm is producing its first clean energy for Egypt, putting the 250 MW project one step closer to completion.

Located 30 kilometers north-west of Ras Ghareb, West Bakr Wind is due to become fully operational by the end of 2021. Construction began on the windfarm in September 2019, and the first turbines were installed in late December 2020.

The project is part of the Egyptian government’s Build, Own Operate (BOO) scheme, a key part of the government’s ambitious aims to generate 20% of its electricity from renewable sources by 2022. West Bakr Wind will produce over 1000 GWh every year for 20 years and prevent more than 550,000 tonnes of carbon dioxide emissions annually. On its own, West Bakr Wind will increase Egypt’s wind capacity by 18%.

The project will have a long-term impact beyond just generating electricity for 20 years. As with all of Lekela’s projects across Africa, the West Bakr Wind Farm has a long-term commitment to the nearby local community of Ras Ghareb. The development of the next stage of this sustainable community plan is underway.

As well as creating jobs during the construction period, Lekela is supporting the local community through a number of socio-economic initiatives. These include its Women Empowerment Program, which is focusing on skills development for women in Ras Ghareb including a Female Engineering Apprenticeship Program specifically aimed at increasing female participation in the renewables sector in Egypt.

Lekela’s local commitment also includes protecting the Gulf of Suez’s rich biodiversity with the development of a ‘shut down on demand’ program to protect migrating birds. To achieve this, Lekela has signed a protocol with the Egyptian Environmental Affairs Agency and its Migratory Soaring Birds project to contribute towards the funding and implementation of the Migratory Birds Monitoring training program.

Lekela will invest in consultancy services and training equipment, and has already sponsored eight trainees from nearby Ras Ghareb, creating sustainable jobs for the community and supporting the local ecosystem.

Faisal Eissa, General Manager for Egypt at Lekela said, “With the first turbines at West Bakr wind farm reaching synchronisation, we are one step closer to providing Egypt with clean, renewable wind power.

“This is always an exciting milestone, but the fact its Lekela’s first project in Egypt really adds to the sense of pride. While the 250 MW wind farm will provide a much-needed uplift to Egypt’s wind capacity, providing that power is just one part of our work. We are committed to protecting the Gulf of Suez’s biodiversity through our migratory bird program and supporting the nearby community of Ras Ghareb, now and in the future.”

Lekela is a renewable power generation company that delivers utility-scale projects which supply much-needed clean energy to communities across Africa.

Through a platform built to develop, own and operate wind and solar assets, Lekela draws from its team member’s extensive experience, and from its founder shareholders decades of proven energy heritage. Lekela has the skills and drive to progress projects from mid or late-stage development into long-term operation. As a result, Lekela delivers sustainable, reliable and competitively priced power to governments, utilities and large-scale industrial projects.