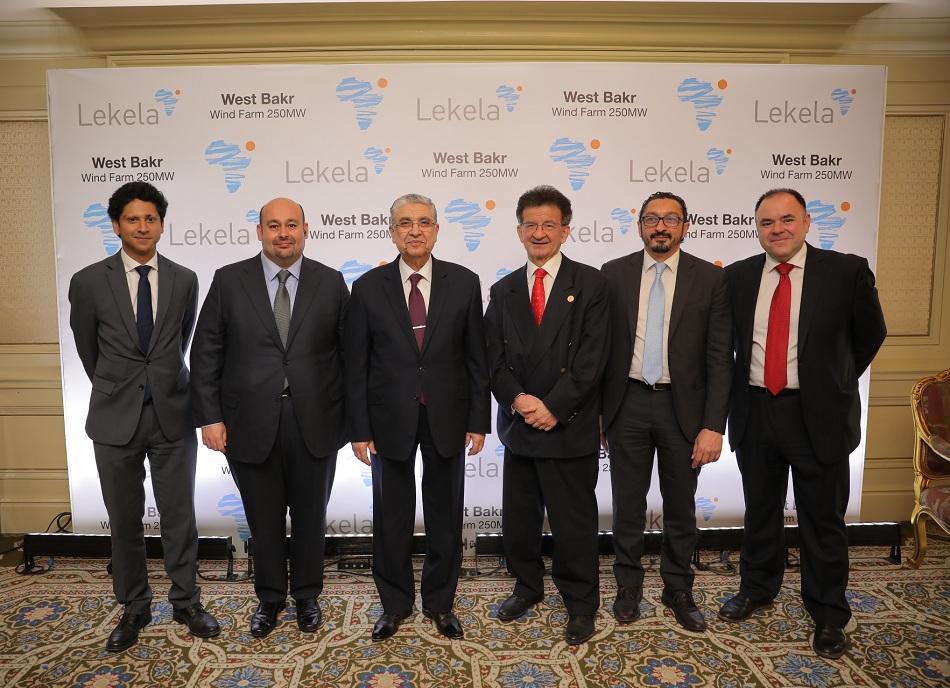 Lekela, the renewable power generation company that delivers utility-scale projects across Africa, today celebrated commercial operation  of its 252MW West Bakr Wind farm in Egypt. Three months after the official start of commercial operations, a formal ceremony was attended by Lekela’s stakeholders and partners, His Excellency Dr. Mohamed Shaker, Egypt’s Minister of Electricity and Renewable Energy, and Mr. Qudsi Rasheed, the Chargé d’Affaires at the British Embassy in Cairo; in addition to senior government officials from EETC and NREA.

The project reached commercial operation in November 2021, having taken less than two years to build. Since then, West Bakr Wind has begun delivering renewable energy across Egypt, supporting the government in its ambitious aims to generate 20% of Egypt’s electricity from renewable  sources by 2022.

Faisal Eissa, General Manager for Lekela Egypt said: “We are very excited to celebrate today the operation of West Bakr, our first Wind Farm project in Egypt. It is a hugely important project for the region, providing access to clean, reliable power and supporting the transition to a more sustainable Egypt.

“We’d like to thank all our partners, Lekela colleagues and the Egyptian Government, who have been central to the success of the project so far. We’d also like to thank the local community of Ras Ghareb, who remain at the heart of our work, as we look forward to continuing and growing our community investment program in this next stage of the project.”

Chris Antonopoulos, Chief Executive Officer at Lekela said: “West Bakr Wind is already helping push Egypt closer to its clean energy goals and providing a significant uplift to wind power capacity. Egypt is strongly placed to become a clean energy powerhouse and is leading the charge on the move to renewables”.

“It’s an honour to celebrate the wind farm today with our partners and the local community. As with all Lekela’s projects, we are committed to ensuring that the clean, reliable energy provided by the wind farm benefits the community as a whole over the coming decades”.

“At a time when global attention is on the climate crisis, and what businesses and governments can do to solve it, this project shows that the future of energy in Africa must be renewable.”

Chargé d’Affaires at the British Embassy in Cairo, Qudsi Rasheed, said: “I was delighted to attend Lekela’s ceremony celebrating the completion and the start of commercial operations of its 252MW West Bakr Wind farm in Egypt. This project will increase Egypt’s wind power capacity by 18% and at the same time prevent more than 530,000 tonnes of carbon dioxide emissions annually. This is a massive contribution to Egypt’s sustainable energy ambitions, and a real milestone on the way to meeting government targets. Investments like this are the bedrock of the green partnership between Egypt and the UK, and we stand hand in hand with Egypt in its ambition to build a clean, sustainable and resilient economy.”

Comprising 96 turbines, installed by Siemens Gamesa, West Bakr Wind will produce over 1000 GWh of renewable electricity every year and prevent more than 530,000 tonnes of carbon dioxide emissions annually. On its own, the project increases Egypt’s wind power capacity by 18%.

As with all of Lekela’s projects across Africa, the project will have a long-term economic and social impact during its generating lifetime. As part of this, the development of the next stage of a sustainable community plan for the nearby Ras Ghareb community is underway.

Having first created jobs during the construction period, Lekela continues to support the local community through a number of socio-economic initiatives. These include its Women Empowerment Programme, which is focusing on skills development for women in Ras Ghareb including a Female Engineering Apprenticeship Programme specifically aimed at increasing female participation in the renewables sector in Egypt.

Lekela’s local commitments also include protecting the Gulf of Suez’s rich biodiversity with the development of a ‘shut down on demand’ programme to protect migrating birds. To achieve this, Lekela has signed a protocol with the Egyptian Environmental Affairs Agency and its Migratory Soaring Birds project to contribute towards the funding and implementation of the Migratory Birds Monitoring training programme.

Lekela is also investing in consultancy services and training equipment, and has already sponsored trainees from nearby Ras Ghareb, creating sustainable jobs for the community and supporting the local ecosystem.

Lekela is a renewable power generation company that delivers utility-scale projects which supply much-needed clean energy to communities across Africa.

Through a platform built to develop, own and operate wind and solar assets, Lekela draws from its team member’s extensive experience, and from its founder shareholders decades of proven energy heritage. Lekela has the skills and drive to progress projects from mid or late-stage development into long-term operation. As a result, Lekela delivers sustainable, reliable and competitively priced power to governments, utilities and large-scale industrial projects.