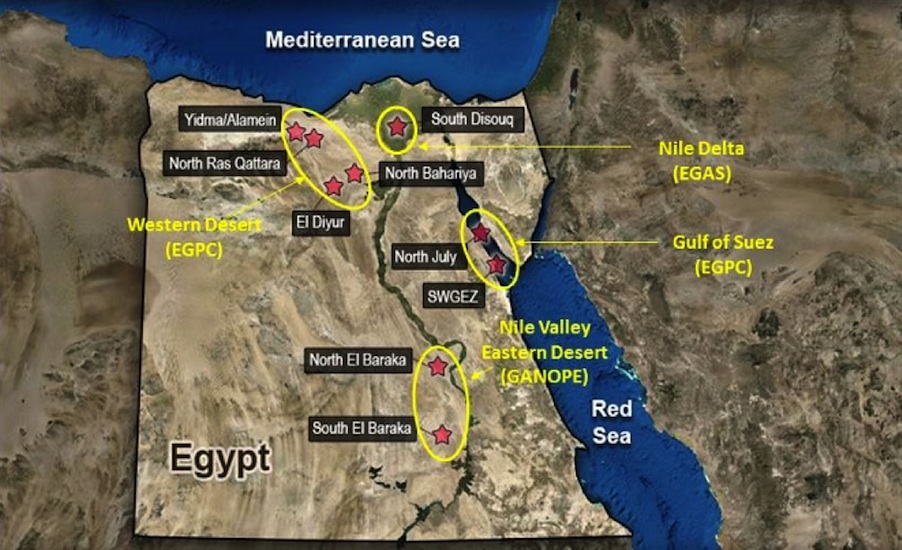 IPR Drilling Away in Egypt: US independent IPR Energy Group continues to execute its largest drilling and operational campaign since entering the upstream sector in Egypt in 1993, with the drilling of 25 of 40 planned wells during the first half of 2018. According to the company this pace of activity will continue through the balance of the year with 15 additional wells in different areas of the country.

The 2018 drilling and workover programs span the Western Desert, Nile Delta, and Gulf of Suez in IPR’s operated and non-operated portfolio of assets. This combination of exploration, appraisal, and development drilling has increased the company’s upstream gross production in Egypt to over 21,000 bpd.

In the Western Desert, IPR discovered a new field in the Alamein Lease with the Southeast Alamein-1X (SEAL-1X) exploration well. SEAL-1X encountered 97 ft of pay from the Razzak sand, Basal Middle and Upper Bahariya sands and Abu Roash “G” Dolomite. Testing and evaluation of the various zones are underway for future appraisal and development drilling in this area of the Concession.

These wells were drilled with new technology by IPR International Oilfield Services’ 750 HP rig (IPR-Rig 1), which saw record times and reduced costs for wells as deep as 8,500 ft.

Horizontal production technology application was introduced for the first time in the Alamein field with the drilling of NEAL-15H in the A/R “G”, which experienced record production rates when compared to vertical A/R “G” wells. A new horizontal well, NEAL-19H, will target the upper A/R “G” Dolomite of the Northeast Alamein (NEAL) field of the Western Desert. Key exploration well, Northeast Yidma‑1X, and development well, AEB 3C 11, are slated to be drilled by the EDC-1 1500 HP drilling rig during H2 2018.

IPR’s North Ras Qattara (NRQ) Concession in the Western Desert continued to see significant exploration success with the discovery of NRQ-12X, which tested 1,458 bpd from the Lower Bahariya formation, in addition to appraisal wells, NRQ 255-18 and NRQ-9-7, which brought an additional 820 bpd from the two wells. Drilling will continue in this promising block with additional facilities planned for installation which are required to handle the excess production capacity.

In the Nile Delta, further exploration success was achieved in the South Disouq Concession with the exploration discovery of Ibn Yunis-1X, which tested 26.9 Mmcf/d of gas. Further encouraging results were encountered in appraisal well, SD-4X, which tested 28.7 Mmcf/d from the Abu El Maadi (AEM) formation. The SD-3X discovery showed hydrocarbon presence in both the AEM and Kafr El Sheikh (KES) formations and tested 16 Mmcf/d from AEM.

A 170 sq km 3D seismic program is planned to further assess the exploration potential in the southern territory of the Concession.

IPR applied for the first time hydraulic frac technology in the offshore North July Concession of the Gulf of Suez to restore production after a successful fracture stimulation workover program in NJ-1 and produced steadily at 550 bpd after the frac job. Artificial lift scenarios are presently being analyzed by field operators to maximize production from this platform, which has been producing water free since 2001.