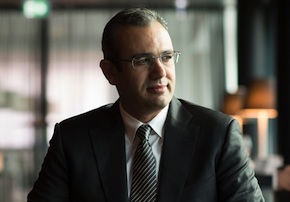 Interview with the Siemens Magazine: Fresh from clinching an €8 billion contract that will boost the energy output of his native Egypt by nearly 50 percent, Siemens head of global power and gas sales Karim Amin combines a relaxed charm with a formidable grasp of an extensive portfolio.

As a trained commissioning engineer, the father-of-two has a hands-on appreciation for the nuts-and-bolts of establishing a stable energy supply; whether the customer is a large country or small company, a floating liquefied natural gas operator or an urban utility.

And while the landmark contract in Egypt for high-efficiency natural gas-fired power plants and wind power installations will add a huge 16.4 gigawatts (GW) to the country’s national grid, Mr. Amin insists that this sort of deal is not unusual; rather, just a good illustration of Siemens’ skillset. As Mr. Amin put it: “In terms of magnitude the capacity of this contract is huge. But ultimately we were able to understand the customer’s requirements and respond very fast to meet their schedule. That’s something I hope we would be able to do whatever the size of the deal.”

He added: “Typically, deals like that take at least a year and a half until financial close, but for Egypt we financially closed it in six months. I think the most important milestone is that we will put in 4.4GW in 18 months from initial contract signature which is very, very unique.”

Egypt is getting 24 of Siemens’ H-class gas turbines – a class that set industry benchmarks for efficiency. This efficiency is just one measure of success, Mr. Amin highlights however: “At Siemens we are always pushing technology’s frontiers. But efficiency is only one element of a success that we measure by customer trust. Most importantly is the ability to optimize the levelized cost of electricity according to customer specific requirements; that way we ensure maximum customer value.”

Finance part of the recipe

Mr. Amin works closely with Siemens Financial Services; a team with extensive experience in providing different financial instruments for clients ranging from facilitating export credit coverage into arranging equity investment; securing project and structured financing and more. It is an important asset as his client base grows to include a wide range of emerging market clients, whose needs may differ significantly and as he puts it, the age of a “one-size-fits-all” model – both for power delivery and contractually – is long dead.

To that end, while Siemens Financial Services are on hand to assist with financing, service teams in North America, Latin America, Europe, the Middle East, and Asia Pacific are also all ready to put boots on the ground for clients in a genuinely localized operation. Not that they will be needed that often. As Mr. Amin put it: “We have extremely strong track record when you look at figures of availability and unavailability of the Siemens fleet.”

Digitization meanwhile is further boosting reliability and refining the approach to servicing. With an H-class typically contains more than 3,000 sensors, Mr. Amin highlights that the development by Siemens of advanced algorithms in remote monitoring and remote diagnostics means the scope of maintenance can be flexible, based on the data received, so rather than prescribing part changes after a certain number of operating hours, it can be done precisely when needed.

One of the pleasures of the job for Mr. Amin is a hugely diverse portfolio. Among his offerings are a wide range of combined heat-and-power (CHP) plants. Siemens’ Fortuna plant in Düsseldorf, for example, reaches full output less than 25 minutes after powering on. And it does that while hitting maximum electrical net output of 603.8 MW: a record for a combined cycle plant of this type in a single-shaft configuration.

“A lot of the boilers in urban centers are from the Stone Age” he notes. “For municipalities, utilities, and industrial customers that require captive power and steam for their processes, CHP is a wise move. Fortuna offers a maximum electrical net output of 603.8 MW and can also deliver up to around 300 MW for Düsseldorf’s district heating system. This increases the overall efficiency of natural gas as a fuel to 85 percent.”

So what is the best thing about the job for Mr. Amin? “The work we do really helps make an impact. By providing a stable supply of electricity you improve quality of life and create a sustainable platform for other businesses to flourish. You bring a lot of suppliers with you, and this boosts everyone from shipping companies to local site scaffolding companies. Ultimately, where you have steady electricity, you see businesses flourish, jobs created and peoples’ lives improved − and that’s great to witness.

In April back in Mr. Amin’s native Egypt, training began by Siemens of 600 Egyptian engineers and technicians in collaboration with the Egyptian Ministry of Electricity and Renewable Energy. Because partnership is more than just fine words and collaboration is in Siemens’ DNA.