"Innovations for Oil Spills" By Amanda Saint (from Eniday.com) 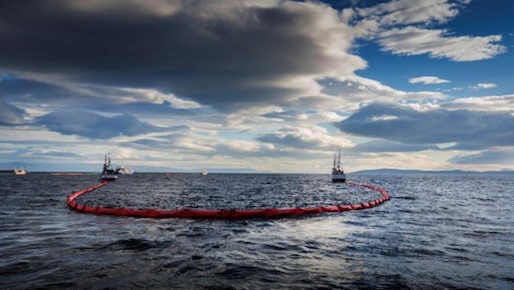 While the drive to generate more energy from renewables and less from fossils continues to gain momentum, there is no getting away from the fact that for now oil and gas remain an important part of power provision the world over.

So what innovations are being developed to clean up when things go wrong…?

There are many different solutions in development and academic researchers and businesses alike are working hard to come up with innovative ideas that will make cleaning up after oil spills a lot easier, quicker and less damaging to the marine environment.

Using biomimicry, which copies nature to deliver technology innovations, a team at Ohio State University has come up with a mesh system that has been inspired by how lotus leaves repel oil and allow water through. They’ve used this system, which has a nearly invisible oil-repellant coating painted onto the mesh, to design nets that can be used to clean up oil spills and will allow the oil to be re-used. The mesh and its coating are all non-toxic and the team estimate that the nets could be created for less than a dollar per square foot.

Seaswarm is an innovation from researchers at the Massachusetts Institute of Technology (MIT) that uses fleets of magnetic robots to skim the oil from the water. These robots are photovoltaic powered to propel themselves through the water and are essentially conveyor belts made of a thin nanowire mesh that can absorb up to 20 times their weight in oil. The swarms navigate and communicate using GPS and WiFI and because of their smaller size are more mobile and can reach places that skimmers attached to boats can’t.

Canadian company, Encore3, has come up with Milkweed Oil Clean Up Kits. The Milkweed plant’s seed pods have hollow fibers that are water repellant so the Encore3 team has developed the kits using this natural material. The fibers are placed into polypropylene tubes, which can be laid on oil slicks on both land and water, and they can absorb oil at a rate of 0.06 gallons per minute, which is twice as fast as conventional oil clean-up products.

Smart Filter Technology being developed by researchers at the University of Michigan uses gravity rather than chemicals to strain the oil from the water. It works through the application of an oil-repelling polymer, which lets the water fall down while the oil beads up on top. The team say that it does this by exploiting the differences in the capillary action behaviors of oil and water and it is the first time this has been achieved.

PETROGEL™ is an invention from Professor T. C. (Mike) Chung at Penn State University. It’s a super absorbent polymer that soaks up just the oil and no seawater. It can absorb up to 40 times its weight, meaning just one pound of PETROGEL can soak up 5 liters (1.3 gallons) of oil, which it transforms into a gel-like substance that can be easily transported away from the spill site and re-used. Here is an early stage of the invention in action.

At the University of California San Diego’s Department of Nanoengineering, researchers led by Prof. Jospeh Wang have been developing microsubmarines that work in teams to absorb all of the oil and then gather at a collection area to get rid of it safely. The results of the research were published in the ASC Nano journal in the paper entitled “uperhydrophobic Alkanethiol-Coated Microsubmarines for Effective Removal of Oil.”

The microsubmarines have been developed using microtube engines, which are very small and were originally designed to transport targeted medication around the human body. The team has adapted the microtubes by applying a superhydrophobic layer to them that the oil sticks to while allowing the microsubmarines to glide easily through the water. Only tested in the lab so far, if these microsubmarines turn out to be a viable solution for cleaning up after oil spills, then whole armies of these devices could be deployed in the future.

While many of these solutions are still at the very early stages of development, one thing that they all have in common is that they eliminate the need for harsh chemicals in the oil spill clean-up process and remove oil from the water a lot faster. This a big step forward in helping to make the marine environment safer during the ongoing transition from fossils to renewables.

“Innovations for Oil Spills” by Amanda Saint
Republished from Eniday.com (an Eni.com project) under Creative Commons License (CC BY-NC-SA 3.0 IT)