Infographic: What Can Be Made from One Barrel of Oil? (Visual Capitalist) 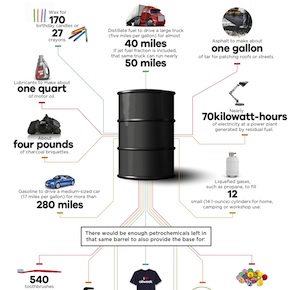 Oil gets a bad rap these days, but the stuff is actually quite incredible.

Many people think of crude oil as a thick, black liquid that is used to source our unquenchable thirst for gasoline. However, the reality is that each barrel of oil is refined to be used in a variety of applications that includes fuel, cosmetics, plastics, rubber, and candle wax.

WHAT’S IN ONE BARREL OF OIL?

Today’s infographic comes from JWN Energy, an oil and gas news site. Using Chevron as a source, it shows 17 different things that can be made from each barrel of oil.

Here is everything that can be made from just one barrel of oil:

But that’s not all. After producing all of the above products, there’s also enough petrochemicals leftover to be used as a base for one of the following:

Oil is not a one-trick pony, and the gooey black liquid actually has thousands of applications. The above serves as one example of how a barrel could be used, but here’s a list of many other oil applications. It includes everything from guitar strings to antihistamines.

Whatever your opinion is of fossil fuels, it’s still pretty astonishing what can be produced out of each barrel of oil.