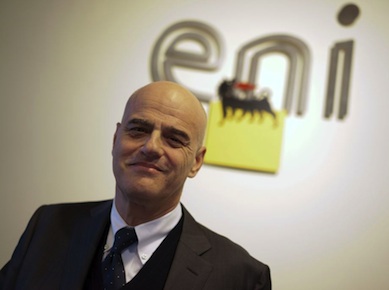 Over a lunch of locally caught Mediterranean seafood, Claudio Descalzi delivers a pep talk to managers around a large dining table in the offices of a petroleum plant near Port Said, Egypt. “We need to do more, more, more every day,” says the chief executive of Eni, the Italian oil and gas group.

He is here to inspect work on Eni’s $11bn Zohr offshore gas development — one of the biggest of its kind in the world — which the company is aiming to bring on stream by December, less than three years after the field was discovered.

That would be the fastest a project of its size has started production in industry history and Mr Descalzi, a towering former rugby prop-forward with a balding head, craggy face and piercing brown eyes, makes clear to his subordinates that he expects the deadline to be met.

Zohr will add to the 15 per cent surge in production by Eni since Mr Descalzi took charge in 2014, all of it derived from the group’s own exploration. This marks Eni out from rivals, most of which have had output stagnate in recent years or relied on to replenish reserves.

“The industry has forgotten how to do exploration,” says Mr Descalzi in an interview with the Financial Times, ahead of Eni’s full-year results and strategy update on Wednesday. “Everybody else went looking for tar sands or tight oil or acquisitions. We thought there was still potential in conventional exploration.”

Plenty of risks exist for Mr Descalzi’s strategy of transforming Eni from a diversified energy conglomerate — it has sold pipeline and oilfield services businesses — into a company more focused on exploration and production.

The Italian group found 13bn barrels of oil and oil equivalent between 2008 and 2015, 2.5 times more than it produced during that period, compared with an industry average of 0.3 times’ output.

“Among the European majors, only Eni has been able to successfully translate exploration activities into valuable giant oil and gas discoveries,” says Michele Della Vigna, analyst at Goldman Sachs.

Mr Descalzi will trumpet this achievement — and point out that the full fruits of Eni’s exploration success are still to come — when he addresses investors in London on Wednesday. Analysts expect production to be increasing by between 3 and 5 per cent a year by 2020, positioning Eni better than most competitors. 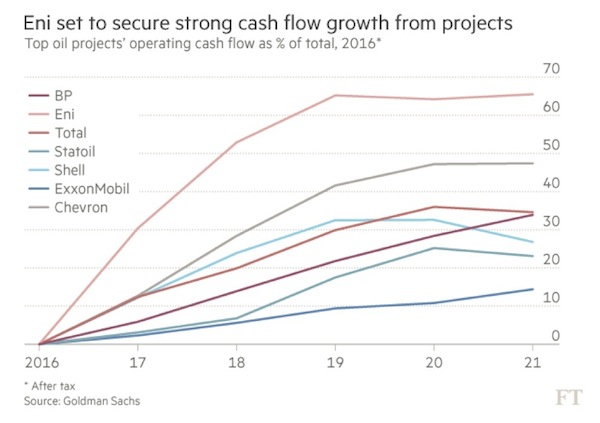 However, it is not only investors that Eni’s chief executive has to impress. The Italian government owns a 30 per cent stake in the company — providing the state with de facto control — and its approval is needed if Mr Descalzi is to be reappointed at Eni’s annual meeting in April, when his three-year contract expires. 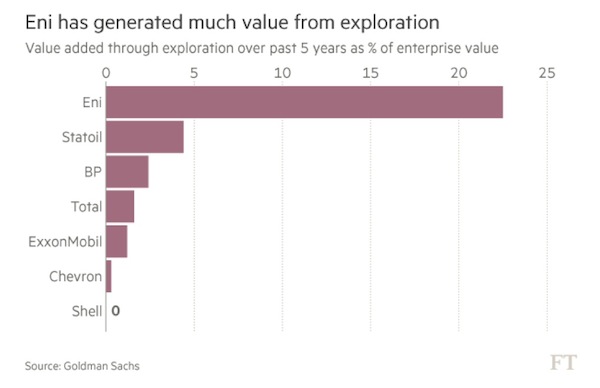 Mr Descalzi, a trained physicist who joined Eni as a petroleum engineer in 1981, has spent his entire career in E&P. As head of the upstream business for six years until 2014, he laid the foundations for the improved performance delivered as chief executive.

As well as finding lots of oil and gas, he has sought to maximise returns by driving down operating costs by more than 30 per cent since becoming chief executive and accelerating the speed with which new developments are brought on stream.

Heavy development expenses have been offset by the sale of a 30 per cent stake in the Zohr field to Rosneft of Russia and 10 per cent to BP, for a combined $2.2bn. A similar sum is likely from a planned stake sale in Mozambique, where the giant Coral gasfield is the next big project awaiting development by Eni. Mr Descalzi says he is hopeful a Mozambique deal will be done soon, but declines to comment on widespread expectations that it will be with ExxonMobil.

The sharing of development costs will support further cuts in Eni’s capital expenditure and net debt, which is down 16 per cent since 2014 to €16bn at the end of the third quarter, according to Mr Della Vigna. Every other oil major recorded increases in borrowings over this period. 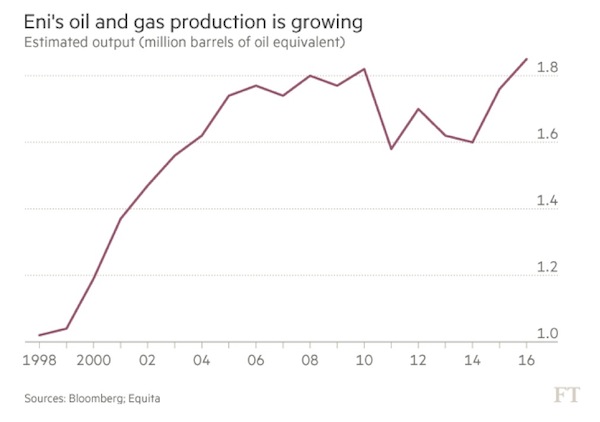 Meanwhile, the restructuring of Eni’s wider business has been welcomed by investors, with a 30 per cent reduction of refining capacity and divestments of stakes in Snam, the gas pipeline business, and Saipem, the oilfield services group, since Mr Descalzi took over.

There is potential for further portfolio sharpening after an abortive effort last year to offload the Versalis chemicals unit, and Mr Descalzi says he will consider options for the group’s retail gas and power business. Analysts expect that, by 2020, downstream refining and marketing will account for only 5 per cent of Eni’s earnings, compared with an average of 20 per cent among industry peers.

Eni’s increasingly dominant E&P business looks well placed to ride the recovery in oil prices, with costs low enough to survive any future downturn. The biggest uncertainty is whether Mr Descalzi, as the architect of this strategy, will be allowed to see it through.

No regrets over cut to dividend in 2015

Eni is the only large oil and gas group to have cut its dividend since crude prices plunged in 2014, and chief executive Claudio Descalzi says he has no regrets over the decision.

While rivals have borrowed money to avoid reducing their payouts to shareholders, Mr Descalzi says his company’s 30 per cent dividend cut in 2015 put its finances on a more sustainable footing.

Following cuts to operating costs, Eni is today generating enough cash to cover its capital spending and dividend with oil at $50 per barrel, compared with $127 in 2013, after including proceeds from disposals.

Mr Descalzi says investors “appreciated” the tough medicine of a dividend cut in preference to the scrip dividends introduced by rivals including BP, Royal Dutch Shell and Total. Scrip programmes allow shareholders to be paid in the form of stock rather than cash, reducing balance sheet strain but causing earnings dilution as the number of shares increase.

“We preferred to keep it simple and investors understood that,” says Mr Descalzi.

The gradual recovery in oil prices has eased the immediate threat of dividend cuts by other oil majors, but the cost of defending their payouts has been large increases in debt, while Eni’s borrowings have fallen.

Analysts say several companies, including Shell, still face questions over the long-term sustainability of dividends that were inflated during the era of $100 per barrel oil — a level few people expect the market to return to soon.