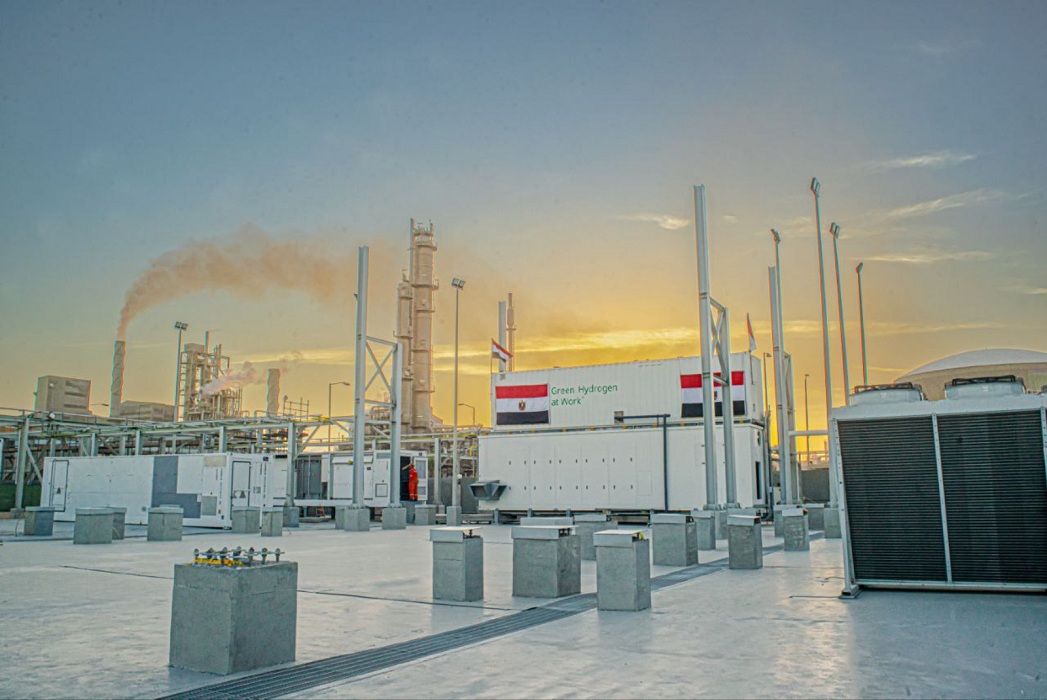 Egypt Green, which is owned, built, and operated by Fertiglobe, the strategic partnership between OCI N.V. and ADNOC, Scatec ASA, Orascom Construction and The Sovereign Fund of Egypt, marks an important milestone in the development of a green hydrogen ecosystem in Egypt and the broader African region.

The launch of the hydrogen facility comes as world leaders gather for the United Nations COP 27 Climate Change Conference in Sharm El Sheikh, Egypt, where they seek to accelerate global climate action through emissions reduction. Unless we make sharp reductions in greenhouse gas emissions in the coming decades, global warming will exceed the Paris agreement’s goal of limiting temperature rise to 1.5 degrees Celsius.

In order to secure affordable, accessible and sustainable energy security for future generations an accelerated shift to renewable energy and lower carbon intensity fuels is required. Green hydrogen, which is produced from water using renewable energy sources, has the potential to play a significant role in decarbonizing hard to abate sectors, such as heavy industries and global shipping.

Ain Sokhna has a strategic position close to the Suez Canal Economic Zone with the possibility of using renewable electricity to develop an industrial hub near global shipping lanes.

Fertiglobe has a strong global network through its shareholders OCI N.V. and ADNOC and is an early mover in hydrogen and low carbon ammonia. The hydrogen tie-ins for up to 100 MW of electrolysis have already been installed at Fertiglobe’s two existing ammonia plants in Ain Sokhna.

The project is being built by Orascom Construction using Egyptian engineers and state of the art technology.

Terje Pilskog, CEO of co-owner and leading renewable power producer Scatec said:
“Today marks a key milestone for Scatec, but more importantly, it represents a breakthrough for green hydrogen production in a strategically situated region. It is an honour to work together with Egyptian authorities and our industrial partners on this project and commence the commissioning of the green hydrogen project in Egypt during the UN world leader’s climate summit. We see a massive green hydrogen demand driven by strong policy support globally, and Africa is perfectly positioned to take advantage of its low-cost renewables and strategic position.”

His Excellency Dr. Sultan Al Jaber, Minister of Industry and Advanced Technology, UAE Special Envoy for Climate Change and chairman of co-owner Fertiglobe, said:
“The commissioning of ‘Egypt Green’ marks another important step in the journey to unlock the potential of hydrogen and its carrier fuels.  As the world meets in Sharm el Sheikh for COP 27, this project represents a practical response to the need to meet rising energy demand with minimum emissions. The first integrated green hydrogen plant in Africa, delivered in record time, shows what can be achieved when we collaborate around a shared ambition. Fertiglobe will continue to leverage its knowledge and experience in hydrogen and ammonia, to make low and zero carbon fuels more available, as the world seeks a realistic pathway to a decarbonized energy system.”

Nassef Sawiris, Executive Chair of OCI N.V. and Executive Vice Chair of co-owner Fertiglobe said:
“We are pleased with the launch of the first tangible project of its kind and the first integrated green hydrogen plant in Africa. It is a true milestone that puts Egypt and Africa firmly on the map as one of the best places in the world to develop a green hydrogen hub, thanks to available land, abundant renewable energy sources, the significant pool of skilled labor, and our location on global cross-roads. We are pleased to have been able to show leadership developing a green ammonia production platform in such a short time frame, something that has not been achieved elsewhere. We could not have done this without the support of in particular the Egyptian government or without the collaboration with our industrial partners. We look forward to seeing the positive impact this project can have for the world.”

Ahmed El-Hoshy, CEO of OCI N.V. and co-owner Fertiglobe said:
“This project is a significant further step towards our global decarbonization strategy and an exciting milestone for Fertiglobe, as it marks the first of many stages in the execution on our hydrogen roadmap. Adding the electrolyzer to our state-of-the-art ammonia facilities and infrastructure in Egypt, we are fully leveraging our existing ammonia production and global distribution infrastructure, including OCI’s Port of Rotterdam ammonia import terminal. We aim to meet the increasing demand for large-scale low-carbon hydrogen and ammonia, as the need for more sustainable energy sources becomes more urgent. Together with our partners in the project we are acting on this need and bringing the hydrogen future to life.”

Osama Bishai, CEO of co-owner Orascom Construction said:
“The project brings together world class partners that collectively set an ambitious goal to form a new hydrogen hub out of Egypt, thus creating a new sustainable industry. So many variables went into making this phase come to life. This project would not have been possible without the support of the Egyptian government and a number of ministries, who by working closely with the consortium, were able to provide immense support that was integral to the swift delivery of the first phase of ‘Egypt Green’. I am also proud of our teams on the ground who worked tirelessly to commission the first phase of this project, consequently, making this launch possible. This state-of-the-art project, which implements the latest hydrogen technology, is built by Egyptian engineers on Egyptian soil. We are delighted to embark on a journey that plays an important role in the sustainable industrial development of Egypt.”

Ayman Soliman, CEO of The Sovereign Fund of Egypt said:
“This project is a showcase of transitioning from pledges to implementation, delivering on Egypt’s promise to the world to create a regional hub for green energy and transforming the Suez Canal into a green corridor. We are setting a precedent with our foreign and local partners from the private sector by establishing the first integrated green hydrogen plant in Africa and Emerging Markets that caters to the growing demand for clean energy. It is a moment of pride that we will build on for future generations. Our pipeline of projects in the green energy field capitalizes on Egypt’s ideal location with its unique renewables profile and proximity to markets with renewables deficits to realize our shared goal of emissions reduction.”

About OCI N.V.
OCI N.V. (Euronext: OCI) is a leading global producer and distributor of hydrogen products providing low carbon fertilizers, fuels, and feedstock to agricultural, transportation, and industrial customers around the world. OCI’s production capacity spans four continents and comprises approximately 16.3 million metric tons per year of hydrogen products including nitrogen fertilizers, methanol, biofuels, diesel exhaust fluid, melamine, and other products. OCI has more than 3,850 employees, is headquartered in the Netherlands and listed on Euronext in Amsterdam. Learn more about OCI at www.oci.nl.

About Fertiglobe
Fertiglobe is the world’s largest seaborne exporter of urea and ammonia combined, and an early mover in clean ammonia. Fertiglobe’s production capacity comprises of 6.7 million tons of urea and merchant ammonia, produced at four subsidiaries in the UAE, Egypt and Algeria, making it the largest producer of nitrogen fertilizers in the Middle East and North Africa (MENA), and benefits from direct access to six key ports and distribution hubs on the Mediterranean Sea, Red Sea, and the Arab Gulf. Headquartered in Abu Dhabi and incorporated in Abu Dhabi Global Market (ADGM), Fertiglobe employs more than 2,600 employees and was formed as a strategic partnership between OCI N.V. (“OCI”) and the Abu Dhabi National Oil Company (“ADNOC”). Fertiglobe is listed on the Abu Dhabi Securities Exchange (“ADX”) under the symbol “FERTIGLB” and ISIN “AEF000901015. To find out more, visit: www.fertiglobe.com

About Scatec
Scatec ASA is a leading renewable energy solutions provider, accelerating access to reliable and affordable clean energy in high growth markets. As a long-term player, we develop, build, own and operate renewable energy plants, with 4.6 GW in operation and under construction across four continents today. We are committed to growing our renewable energy capacity, delivered by our 700 passionate employees and partners who are driven by a common vision of ‘Improving our Future’. Scatec is headquartered in Oslo, Norway and listed on the Oslo Stock Exchange under the ticker symbol ‘SCATC’. To find out more visit www.scatec.com

About the Sovereign Fund of Egypt
The Sovereign Fund of Egypt (TSFE) was established in 2018 to attract private investment to Egypt and promote and co-invest in state-owned assets to maximise their value and support the Egyptian economy. Independently managed by senior finance executives, TSFE selects investable assets from public stakeholders and co-invests in them with local and foreign partners. The fund’s mission is to increase the private sector’s role in the economy and create more jobs for Egypt’s young population. The fund operates under a special law which allows it to establish investment partnerships that offer unique opportunities for investors, to aid the government’s efforts to carry out structural reforms in various sectors and diversify Egypt’s growing economy. The fund adheres to best international practices in all areas, operating with transparent and flexible investment rules, which enable diverse co-investment structures and good governance in management. The fund is supervised by a board of directors and a general assembly with the majority of members coming from the private sector. TSFE was established by Law 177 in 2018. Its charter was issued by the Prime Minister’s Decision no. 555 in 2019. The fund is a member of the International Forum for Sovereign Wealth Funds. To find out more visit: www.tsfe.com