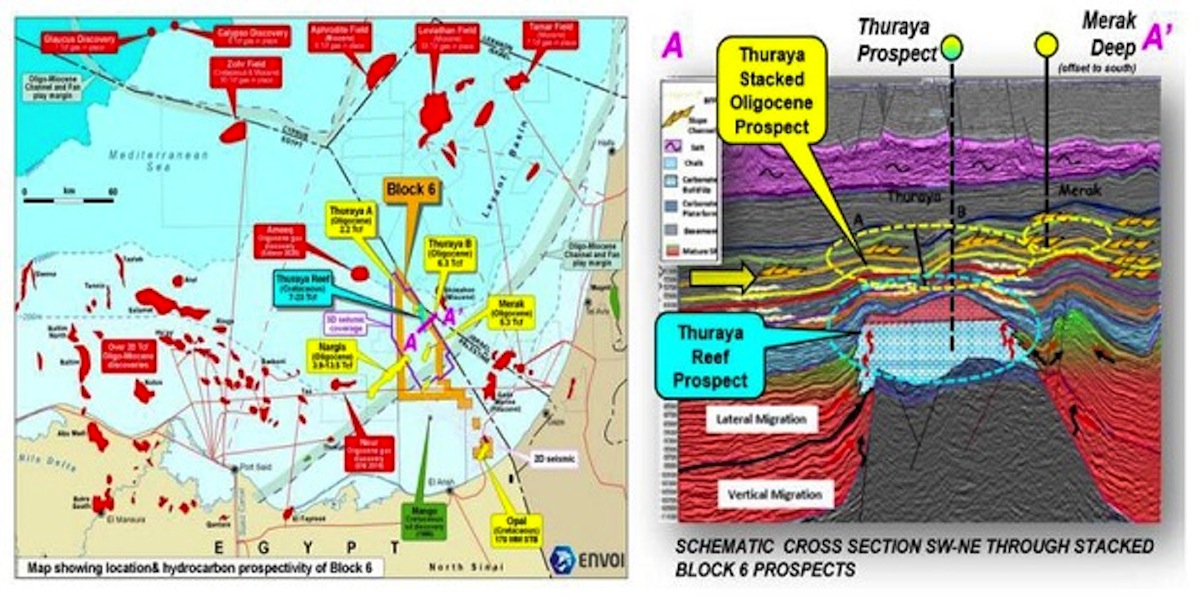 Envoi has been commissioned by UAE based Dana Gas PJSC, to assist in its search for a drilling partner to join them in the exploration drilling of the huge Thuraya prospect, situated some 80 km offshore from the Egyptian coast in Dana Gas’ 100% owned North El Arish Concession (Block 6).

This comprises a multi-Tcf resource potential now defined in the stacked targets of the 3D defined Thuraya Prospect which is the primary focus of the next well. Both reservoir targets can be tested by just one well including a very large Cretaceous carbonate reef developed on the distinct Dakar Basement High, with similarities to the massive 30 Tcf (GIIP) Zohr Field to the northwest. The overlying stacked Oligocene basin floor fan sands form a second primary play target which adds significantly to the prospectivity, as closures for both plays overlap. Interbedded shales seal both the stacked Tertiary sands and the underlying reef carbonates.

Although large carbonate reef prospects are recognised where local basement highs occur in the region (now also including Block 6), the Oligocene sand potential, proven in the Nile Cone by the Salamat and Atoll fields since 2013, has only recently been recognised as a primary play target in the eastern part of Egypt’s offshore nearer to Block 6. Its potential here has been unlocked by the Nour and Ameeq discoveries made in 2019 and 2020 just 20km to the west of Block 6. This Tertiary play fairway is, however, defined by regional seismic amplitude mapping (Figure 7), which clearly show that extensive basin floor fans originated from the Nile Delta. These have prograded through time to the north and east. These delta floor and prodelta complexes progressed into the Levant Basin and through the Block 6 area during Oligo-Miocene times. Today the Miocene is also a proven reservoir in the very large (22 Tcf) Leviathan and Tamar Fields to the north east which are interpreted as the younger more distal extension of the same sediment system that passed through Block 6 with similar resource potential, and where it remains undrilled. The majority of the mapped Cretaceous and two distinct Oligocene closures that overlie it in the Thuraya prospect are now confirmed to lie mostly within Block 6 by the new Broadband 3D survey completed in 2020. 3D seismic as well as shipborne gravity and magnetic data was acquired right up to the maritime boundary to define the edge of the Thuraya prospect after the earlier block-wide 2015 3D survey was not permitted to cover the border area.

Combined, these two plays in the Thuraya prospect are now estimated to be capable of an un-risked ‘mean’ in-place potential of 17 Tcf GIIP (and P10 upside of over 37 Tcf GIIP) with a ‘mean’ recoverable resource potential of over 11 Tcf (and P10 upside of 24 Tcf recoverable), based on conservative volumetric inputs. The commercial threshold for a development in the area is calculated to be around only 2 Tcf recoverable, hence a discovery in either the clastic or reef plays would be highly attractive commercially. The full combined mean resource potential in the Thuraya field of over 11 Tcf is calculated to have an NPV10 value of US$ 2,2bn with an EMV of US$ 1bn. Block 6 also has material follow-on prospectivity, including the same stacked Oligo-Miocene play in three undrilled prospects which combined could add around 7 Tcf to the Block 6 recoverable resources.

The potential value of this opportunity and the Thuraya prospect on its own should not be underestimated. Egypt’s self-sufficiency, with declining domestic gas production, is only expected to be able to fully support demand until around 2025.

Dana Gas is in the process of securing an extension to the current 2nd Exploration Period after unavoidable delays incurred during the seismic data acquisition and the COVID pandemic. Together with the optional 3rd Exploration Period of two years, this will secure the license area for three years enabling the well obligation to be drilled by mid-2023.

Dana Gas is offering a material interest in Block 6 to a company willing to fund the planned Thuraya well, recently estimated likely to cost US$ 95 million (dry hole). A US$ 90 million cost recovery pool, which is fully recoverable under Egypt’s profit-sharing fiscal regime, can also be shared with an incoming party. Operatorship is available to suitably qualified companies.