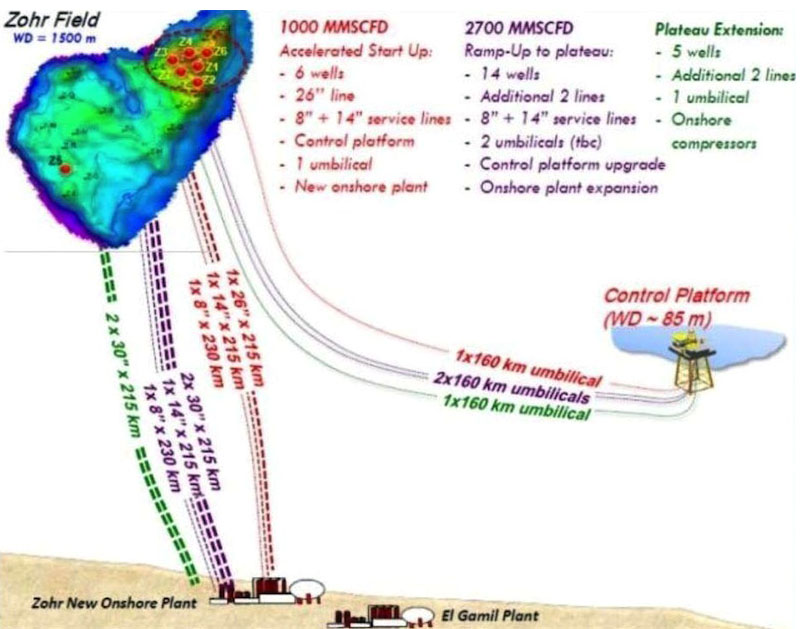 Zohr Ramp-up: Eni reaches 2 bcfd production target.
Zohr is now producing 2 bcfd only a few months after the first gas in December 2017 and 1 year before the schedule of the PoD.

Eni announces that Zohr field is now producing 2 bcfd, equivalent to approximately 365,000 boed. This outstanding result has been achieved only a few months after the first gas in December 2017 and one year before the schedule of the Plan of Development (PoD).

This level of production was achieved thanks to the start-up of the fifth production unit (T4), backed by the 8 gas producers and a new 30” x 218 km sealine, commissioned last month and confirms the program pursued by Eni, its partner, Egyptian Natural Gas Holding Company (EGAS) and their joint venture company Petrobel aimed to reach a plateau in excess of 2.7 bcfd in 2019.

The latest achievement reinforces the exceptional development path of the Zohr project, one of Eni’s seven record-breaking projects, which is playing a fundamental role in supporting Egypt’s independence from LNG imports.

The Zohr field, the largest gas discovery ever made in Egypt and in the Mediterranean Sea with more than 30 tcf of gas in place, is located within the offshore Shorouk Block (some 190 km north of Port Said). In the Shorouk Block, Eni holds a 50% stake, Rosneft 30%, BP 10% and Mubadala Petroleum 10% of the Contractor’s Share (where Eni, Rosneft, BP and Mubadala Petroleum are collectivity the Contractor).

Eni has been present in Egypt since 1954, where it operates through its subsidiary IEOC. The company is the Country’s leading producer with an equity of some 340,000 barrels of oil equivalent per day.