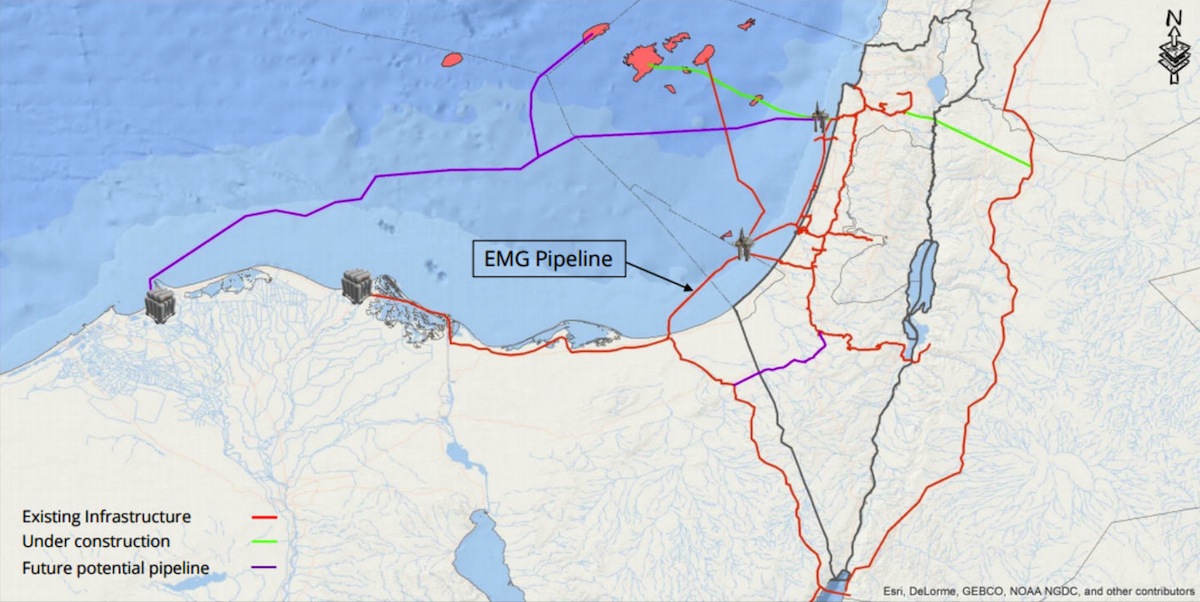 Ownership of the East Mediterranean Gas (EMG) subsea pipeline that runs between Egypt and Israel has been transferred to Israel’s Delek Drilling, Texas-based Noble Energy and Egypt’s East Gas, Bloomberg reports. The move brings us one (very significant) step closer to receiving natural gas from Israel’s Tamar and Leviathan fields under a landmark agreement with Alaa Arafa’s Dolphinus Holdings in 2018. A 39% share in the pipeline were transferred to the three companies, who have partnered in a venture known as EMED, according to a statement to the Tel Aviv Stock Exchange on Sunday.

About EMED: The EMED joint venture has bought a 39% stake in the EMG pipeline for USD 520 mn. Egypt’s East Gas holds a controlling 50% stake in the venture, while Delek and Noble both hold 25%.

There are no remaining preconditions to be fulfilled for the purchase of the rights to operate the gas pipeline to be completed, said Delek, and the transaction should be finalized within days. In October, it was reported that EMED had already made 70% of the payment to acquire a controlling stake in EMG.

When will Israeli gas start flowing? The latest ETA for Israeli gas exports to reach the Egyptian market is early 2020, Delek and Noble have said. Some reports have suggested that the gas will start to flow as early as 1 January 2020.

Egypt has avoided paying a fine in a USD 288 mn lawsuit brought by EMG at the International Chamber of Commerce, according to the local press. The pipeline owner pulled out of the case after Delek, Noble and Egypt Gas took ownership.

Egypt has worked hard to resolve arbitration cases throughout process, with multiple cases being launched against the country for breaching supply agreements in the wake of the events of 2011. Egypt was forced to pay a USD 500 mn settlement to Israel in June for cutting gas shipments in 2012. Thailand’s PTT Energy Resources brought a USD 1 bn suit against the Egyptian government in May, alleging that Egypt failed to meet gas deliveries after 2011 and caused EMG — in which it held a 25% stake — to fail to meet its contractual obligations to its customers.

Capacity and regulatory issues also forced delays: Trial gas shipments were originally supposed to begin in March, with commercial sales beginning by the end of June, but capacity restrictions of Israel’s domestic pipeline network caused delays. A series of Delek-led tests on the EMG pipeline in July removed any doubts about its integrity, however, confirming that it is fit to transport up to 7 bcm of natural gas per year. Israeli regulators caused further delays before antitrust lawyers eventually agreed in August Delek and Noble to buy in to the pipeline.

Companies developing Israel’s largest natural gas fields and their Egyptian partner have taken control of a pipeline connecting southern Israel and Egypt’s Sinai desert, removing one of the last obstacles to a major export contract between the countries.

A landmark contract signed in February 2018 between Israel and Egypt had been held up while the three companies struck a deal to buy out partners in the EMG pipeline that were mired in legal fights with the Egyptian government. Noble and Delek, which own pieces of the Tamar and Leviathan reservoirs in Israeli waters, plan to start servicing the Egyptian market at the beginning of next year.