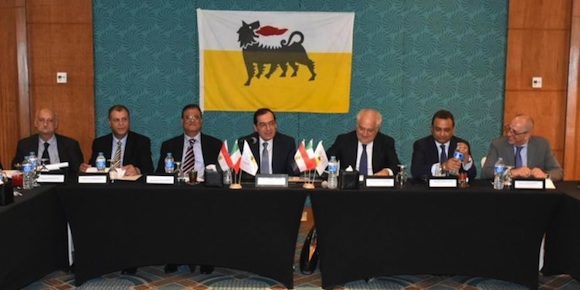 Minister of Petroleum and Mineral Resources, Eng. Tarek El Molla, met with the Higher Committee, comprised of the Egyptian General Petroleum Corporation (EGPC), the Egyptian Natural Gas Holding Company (EGAS), Petrobel, Italy’s Eni, and BP to follow up on the development of the Zohr field project.

Minister of Petroleum Tarek El-Molla stated on Friday that 71 percent of drilling and constructions works in the Zohr gas fields are complete. Production will start by the end of this year.

The Zohr gas fields will start production through three phases. The first will be launched in a few months with an output of one billion cubic feet daily. After the all seven fields are complete, that amount will increase by 2019 to 2.7 billion cubic meters daily, according to Al-Masry Al-Youm.

An urban station will be established to receive and process natural gas from Zohr as well. This station will be transmitted through subsurface networks. The station is operated by Enppi.

The Egyptian oil company Petrojet has finished manufacturing the maritime field control station, and it is being installed by Petroleum Marine Services Co., according to Al-Masry Al-Youm.

Molla said the flow of equipment necessary for the project matches the timeline set. He added that construction, mechanical, and electric works are being carried out by Petrojet.

Zohr gas field is the largest natural gas field ever found in the Mediterranean, and was discovered in 2015 by the Italian energy company Eni. It lies in an area of 100 square meters at a depth of 1,450 meters.