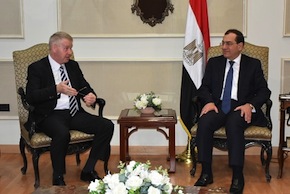 Greece’s Vegas Oil and Gas intends to increase its investments in Egypt in the coming period and will be participating in upcoming oil and gas exploration tenders, CEO David Evans told Petroleum Minister Tarek El Molla in a meeting yesterday, according to a ministry statement.

Vegas operates in the East Lagia concession in Sinai, where it is running ground gravity tests and magnetic surveys.

The Minister of Petroleum and Mineral Resources Eng. Tarek El Molla, met with both the CEO and the Vice President of Vegas Oil and Gas Company to review the company‟s work programs in its concession area located in East Lagia, Sinai, Egypt Oil&Gas reported.

In attendance was the Head of the Egyptian General Petroleum Corporation (EGPC), Abed Ezz El Regal, and the Undersecretary of the Ministry for Agreements and Exploration, Ashraf Farg.

The program reviewed includes 2D seismic survey across 500 km2 and processing the area. Additionally, the program includes de- mining and conduction geo-chemical and field studies. Moreover, the attendees discussed investment opportunities for the company in the oil and gas exploration work as well as the possibility of increasing exploration activities.

Vegas CEO pointed out that the company is interested in boosting its investment during the coming period and is keen to participate in the global exploration tenders that will be launched by the Egyptian oil and gas sector, especially after the recent discoveries that remapped the petroleum exploration in the Egyptian onshore areas as well as in deepwater.