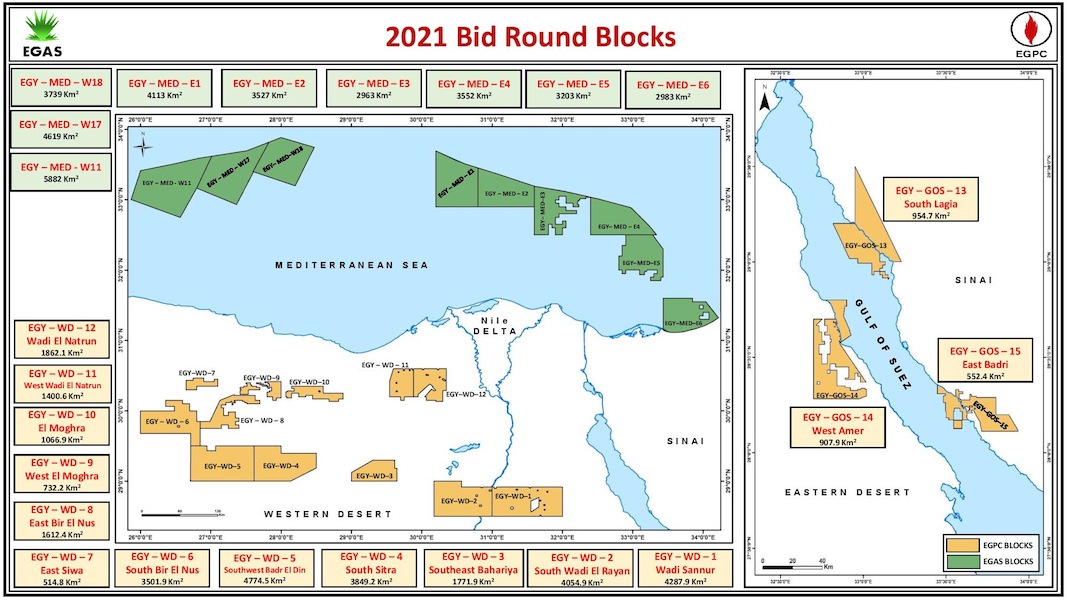 Egypt announced on Thursday the start of a bid round for exploration and exploitation of oil and natural gas in 24 blocks.

The round, which concludes on Aug. 1, includes nine blocks in the Mediterranean Sea, 12 in the Western Desert and three in the Gulf of Suez, an oil ministry source told Reuters.

Egypt has launched its first bid round of 2021 and a new digital platform collaboration, with Schlumberger.

Egyptian Minister of Petroleum and Mineral Resources Tarek El Molla set out plans to offer 24 licences. Acreage is in the Gulf of Suez, the Western Desert and the Mediterranean Sea.

Attending the launch event were a number of company representatives, including Eni, Apache and Wintershall Dea.

El Molla linked the launch of the licence round to Schlumberger’s Egypt Upstream Gateway (EUG).

This digital platform can provide global access to subsurface data, Schlumberger said. It will keep the data “evergreen” by reprocessing legacy information and carrying out new studies.

“Egypt is in the process of launching the Egypt Upstream Gateway, a digital subsurface platform that will act as an up-to-date repository of the country’s subsurface data,” said Minister Tarek El-Molla.

“The Egypt Upstream Gateway will digitally promote Egypt’s oil and gas bid rounds through seamless online access to the sector’s data, as well as endorsing our exploration potential worldwide.”

The gateway will offer more than 100 years of on- and offshore seismic, well logs, production and other subsurface data. It will cover multiple basins.

The EUG will host the country’s bid round. It will provide lease availability data to investors domestically and abroad.

The digital platform is “the embodiment of the Egyptian Ministry of Petroleum’s vision, leveraging digitisation to modernise the country’s petroleum sector,” said Schlumberger president for digital and integration Rajeev Sonthalia.

“With the launch of this industry-first platform, the Egyptian Ministry of Petroleum and its affiliates – EGPC, EGAS, GANOPE – can digitally showcase national assets to investors worldwide, in addition to leveraging the latest digital technology and solutions to accelerate discovery throughout the country.”

Schlumberger set out plans for the EUG in February 2020, during the EGYPS Petroleum Show.

The company’s CEO Olivier Le Peuch said the platform was a first for the industry. It “will transform not only the Egypt oil and gas core processes”, he said. EUG will also “serve as a benchmark for many countries and basins in the future”.