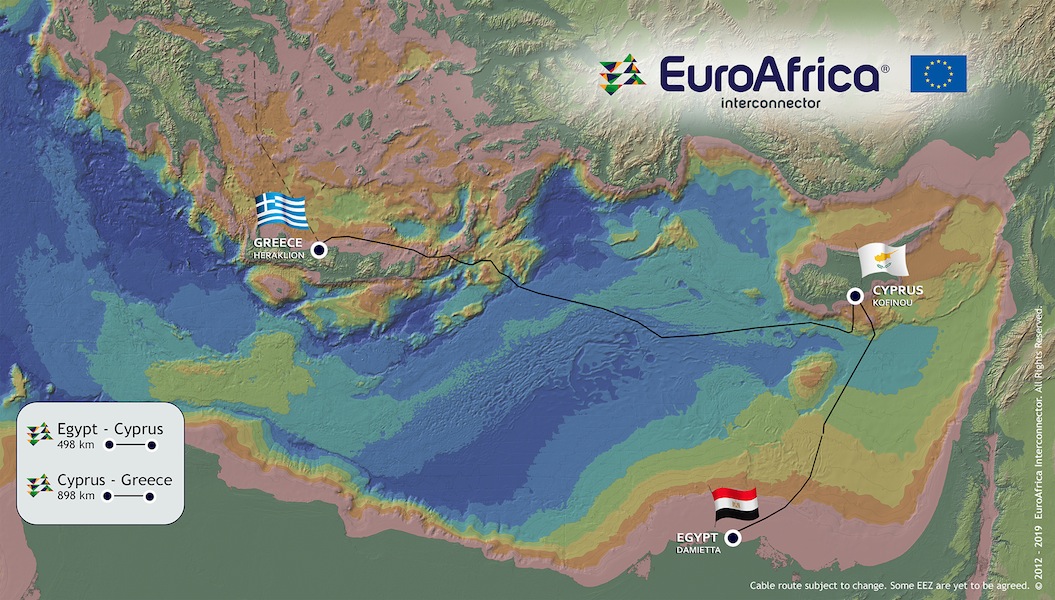 SFE in talks with investors, energy traders to develop EuroAfrica electricity link: The Sovereign Fund of Egypt (SFE) has opened talks with European infrastructure investors and energy traders to join it in investing in the EuroAfrica transmission link and import electricity from Egypt, CEO Ayman Soliman tells Bloomberg. Egypt signed on to the USD 4 bn EuroAfrica Interconnector with Greece and Cyprus last year, and the fund is now in discussions with infrastructure investors and traders to “to find counterparts who can invest alongside the fund and develop the transmission line,” Soliman said.

What is EuroAfrica? The 2-GW transmission link will connect Egypt’s electricity grid to mainland Europe via Cyprus, making it the longest interconnector cable in the world. The first, EUR 2.5 bn phase of the project will connect Egypt, Cyprus, Crete and Greece and is set for commissioning by December 2023 with an initial capacity of 1 GW. The link “will position Egypt as a long-term renewable supply hub for Europe,” Soliman said.

The SFE is also in talks to export electricity to Africa: “We are identifying the relevant players in Africa to partner or work with and we are in talks with some sovereign funds,” Soliman said, without naming specific countries or institutions.

Egypt has begun talks over plans to sell electricity to Europe and Africa, pressing its advantage as a producer of cheap renewable energy in a bid to become a regional export hub, the head of its sovereign wealth fund said.

The nation, which has a surplus of electricity, sees unspecified “power-hungry” countries to the north as possible customers, according to Chief Executive Officer Ayman Soliman. Egypt could supply Europe via a planned sub-sea cable to Cyprus and Greece.

“We are in talks with European infrastructure investors, advisers and energy traders to assess the viability and appetite,” Mr Soliman said in an interview in Cairo. The transmission line “will position Egypt as a long-term renewable supply hub for Europe.” Electricity exports could be a lucrative earner for Egypt, which is already becoming a natural-gas hub after offshore discoveries. The North African nation, which has capacity of about 50 gigawatts – a fifth of that excess – has long-used gas-fired plants and hydropower and is boosting use of other sources. Around 8.6 per cent of the country’s power comes from renewables, and it’s targeting 20 per cent by 2022 and more than doubling that by 2035.

Egypt’s capacity has been bolstered in recent years by three power plants co-built by Siemens AG, a US$4 billion solar park in the south, Benban – one of the world’s biggest – and a wind farm. The country signed a US$30 billion deal with Russia in 2017 to build North Africa’s first nuclear power plant, with capacity of 4.8 gigawatts.

The surplus marks a turnaround from 2013, when Egypt struggled to meet demand for electricity from its rapidly growing population, the largest in the Arab world. Chronic outages helped stoke anger against Islamist President Mohamed Mursi’s government, culminating in his ouster during a military-backed popular uprising.

The fund has an agreement with the Electricity Ministry to engage investors for its export plans. Already connected to Libya and Jordan, Egypt is also seeking to supply emerging economies on its side of the Mediterranean, according to Mr Soliman.

“We are identifying the relevant players in Africa to partner or work with and we are in talks with some sovereign funds,” the CEO said. He declined to specify countries or institutions, saying only they spanned the continent.

Egypt signed an initial agreement on the EuroAfrica Interconnector with Cyprus and Greece last year. The fund is in contact with energy traders “to find counterparts who can invest alongside the fund and develop the transmission line,” and is also holding initial talks with some local and international infrastructure investors, Mr Soliman said.

The first stage of the Egypt-Cyprus-Greece line is estimated to cost 2.5 billion euros (S$4.07 billion) and scheduled for commissioning by December 2023, with initial transmission capacity of 1,000 megawatts, according to EuroAfrica’s website.

Egypt will benefit from the low cost of power production, especially for solar, according to Mr Soliman. A profitable selling price for power from Benban is 2.4 cents per kilowatt-hour, compared to the average price paid per European household of 23 US cents per KWh, he said.

In the industrial sector, he cited a profitable selling price for Egypt of about 9 cents per KWh versus as much as 15.4 cents in nations like Germany and Italy.

“We are keen to tap industrial economies that are power-hungry and environmentally conscious,” Mr Soliman said.