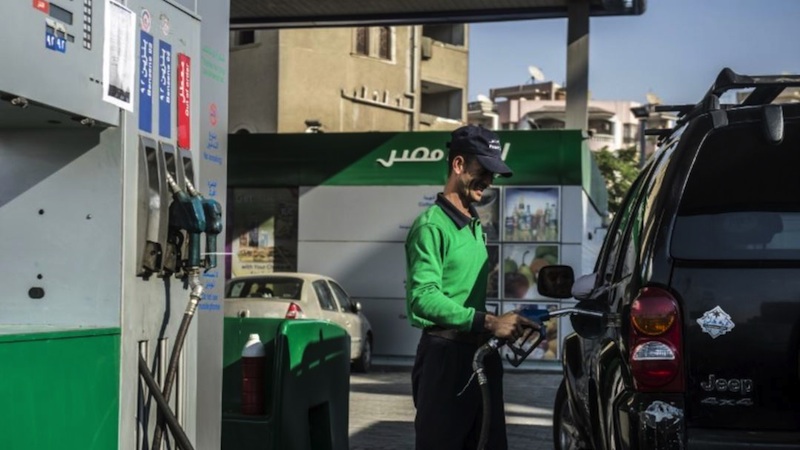 Egypt has raised gasoline prices by up to 50 percent, the oil ministry said on Saturday, under an IMF reform plan calling for austerity measures that have made life tougher for ordinary Egyptians.

Oil Minister Tarek El Molla said the price rises would help Egypt save up to 50 billion Egyptian pounds ($2.8 billion) in allocations for state subsidies in the 2018-19 state budget.

The price hike, the third since Egypt floated the pound currency in November 2016, is expected to pile more pressure on Egyptian consumers struggling to make ends meet amid high unemployment and rising prices.

The ministry also raised the price for a canister of gas for Egyptian households to 50 pounds from 30, while a bottle of gas for commercial purposes was raised to 100 pounds from 60.

The government, under new Prime Minister Mustafa Madbouly, also announced on Saturday a hike in taxi fares by 10 to 20 percent, according to a cabinet statement.

Prime Minister Mustafa Madbouly said that bread prices would not be affected by a 50.7 percent rise in diesel prices. He said the Ministry of Supply would bear the extra cost for bakeries to ensure that the price of Egypt’s main staple remains unchanged.

Subsidized bread is a staple for millions of poor Egyptians and the country’s leaders are always keen to keep supplies flowing for fear of unrest.

But the price rises left many Egyptians angry.

“I pay 40 percent of my income on transportation,” said Mohamed Abed Rabbo, an employee in his 40s employed in a local company in al-Qalyubia, north of Cairo. “Since the last price rise, I have been unable to support my wife and daughter without help from my family,” he added, his voice rising in anger.

In Minya province, south of Cairo, Iman Salah said that only in Egypt did employees spend half of their salary on transportation and the other half on electricity, water and internet. “What do we need to do?” she wondered. “May God have mercy upon us.”

Halfway into a three-year, $12 billion IMF loan program signed in 2016 which is tied to the austerity measures, Egypt hopes painful reforms will lure back investors and kick-start an economy that crashed after its 2011 Arab Spring uprising.

IMF First Deputy Managing Director David Lipton told government officials in May that Egypt would have to deepen reforms and better encourage private sector growth if it wants to cash in on a wave of global expansion.

The IMF-backed austerity program carries risks for President Abdel Fattah al-Sisi, a former army general who was elected for a second term in March.

Sisi, who came to power after the army ousted Islamist President Mohamed Mursi following mass protests against his rule, has overseen a crackdown on vocal critics he sees as trying to derail his reforms.

PUSHING AHEAD WITH REFORMS

Protests in Jordan earlier this month over government plans to hike taxes had raised speculation among some Egyptians that Cairo may delay the planned fuel price increases, which were ordered by outgoing prime minister Sherif Ismail before Sisi replaced him last week.

But Sisi decided to push ahead with the plan, saying the austerity program was necessary to put the country back on track after years of turbulence that began in 2011 when mass protests forced President Hosni Mubarak to step down.

The price hikes were announced as Western-allied Egypt celebrated the Muslim Eid al-Fitr, a public holiday which marks the end of the fasting month of Ramadan.

News of the price hikes were circulated widely on social media but there were no immediate reports of any protests.

A hike in metro ticket prices in May sparked rare protests by commuters in some Cairo metro stations.

Egypt announced on Tuesday new cuts to electricity subsidies, raising prices by an average of 26 percent from July, the latest in a raft of tough economic reforms.

Electricity Minister Mohamed Shaker said electricity costs for factories would rise by 42 percent and for households by 21 percent.

Egypt has committed to deep cuts to energy subsidies and other tough fiscal measures as part of a three-year, $12 billion International Monetary Fund (IMF) loan program begun in 2016.

The government of President Abdel Fattah al-Sisi, re-elected for a second term this year, intends to take further tough measures, including fuel subsidy cuts expected in the summer.

Egypt’s economy was hit during the years of unrest following the 2011 popular uprising that toppled President Hosni Mubarak.

The IMF has praised Egypt’s economic reforms, which included a currency float in 2016 that halved the value of the pound.

Economists see some grounds for hope in reviving the economy, pointing to indicators such as GDP growth, which rose to 5.4 percent in the third quarter of 2017-2018, up from 4.3 percent during the same period the previous fiscal year.

The government has said electricity subsidies will be phased out completely by the end of the 2021-2022 fiscal year.

Egypt will be “forced to increase administered prices by more than it otherwise would have done in order to meet IMF mandated fiscal targets,” Capital Economics said in a report in May.

It said fuel price rises would have to rise by 60 percent in July to keep the subsidy reform program on track.

Many ordinary Egyptians have been hit hard by the austerity measures, especially the currency devaluation. But the moves are seen as vital to improve the battered economy, however.

“It will be challenging for middle income and lower income groups,” Radwa El-Swaify, head of research at Pharos, told Reuters in May. “However, the government has implemented different social packages … trying to alleviate some of the negative impact on the lower income groups.”