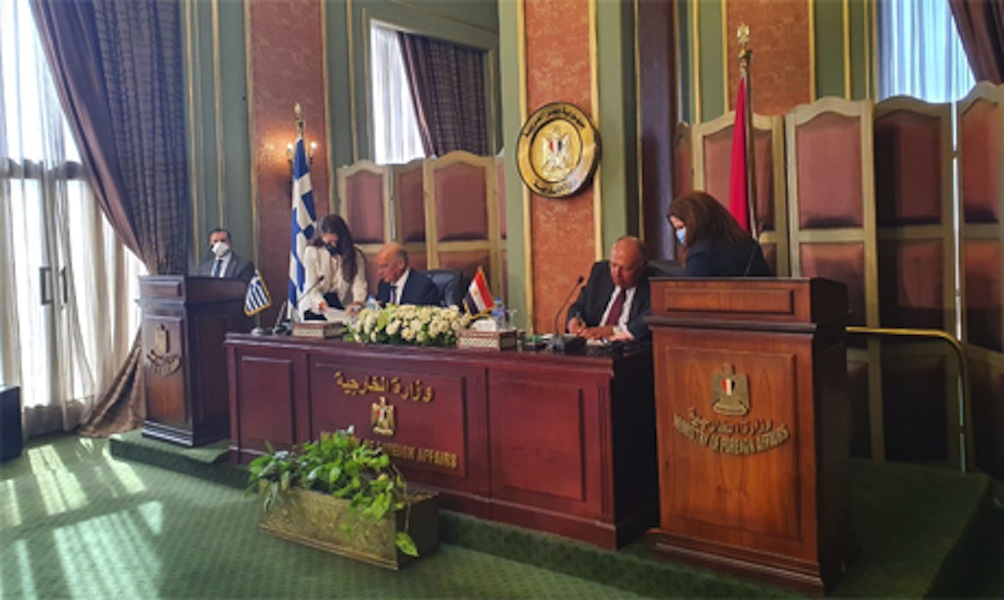 Shoukry made the announcement at a joint press conference with his Greek counterpart Nikos Dendias in Cairo.

“This agreement allows both countries to move forward in maximizing the utilization of the resources available in the exclusive economic zone, especially promising oil and gas reserves,” Shoukry said.

In Greece, diplomats said the deal effectively nullified an accord between Turkey and the internationally recognised government of Libya.

Last year, those two parties agreed to maritime boundaries in a deal Egypt and Greece decried as illegal and a violation of international law. Greece maintains it infringed on its continental shelf and specifically that off the island of Crete.

A map sent to Reuters by the Egyptian foreign ministry showed a demarcation line of Greek and Egyptian maritime boundaries that appeared to leave no possibility of a link between Turkey and Libya.

“The agreement with Egypt is within the framework of international law,” Dendias said.

“It is the absolute opposite of the illegal, void and legally unfounded memorandum of understanding that was signed between Turkey and Tripoli. Following the signing of this agreement, the non existent Turkish-Libyan memorandum has ended up where it belonged from the beginning: in the trash can.”

His statement came hours after Greece said it is ready to start exploratory talks on the demarcation of maritime zones with Turkey as soon as this month.

Egypt, a regional rival of Turkey, has close relations with Greece and Cyprus.

Ahmed Hafez, Egypt’s foreign ministry spokesman, said on twitter that Turkey’s reaction is “surprising” as it hadn’t seen the agreement or its details.

In June, Greece and Italy signed an agreement on maritime boundaries, establishing an exclusive economic zone between the two countries.

Earlier this month, Egypt said that part of a seismic survey planned by Turkey in the eastern Mediterranean potentially encroached on waters where Cairo claims exclusive rights.

Egypt hopes to become a regional energy hub with the rapid growth in Egypt’s natural gas supplies. It formed with other countries the so-called Eastern Mediterranean Gas Forum, which aims to develop the region’s gas market.

Turkey is not a member of the forum, which also includes Greece, Cyprus, Israel, Italy and Jordan.

Egypt, Greece sign maritime demarcation deal: Shoukry said at the conference that the provisions of the deal are in line with international law and the United Nations Convention On The Law Of The Sea.

Shoukry received his Greek counterpart Nikos Dendias in Cairo earlier on Thursday to discuss means to strengthen bilateral relations and coordination between the two countries in the East Mediterranean region.

Shoukry said at the conference that the provisions of the deal are in line with international law and the United Nations Convention On The Law Of The Sea.

The deal targets tapping into the capabilities available in the Eastern Mediterranean region, he added.

“The deal permits Egypt and Greece to go ahead with maximising benefits from riches available in the exclusive economic zones of both countries, particularly the promising gas and oil reserves,” he stressed.

Shoukry pointed out the new agreement paves the way for more regional cooperation between the Egyptian and Greek sides in the field of energy, given the membership of the two countries in the Eastern Mediterranean Gas Forum.

Shoukry added that “the friendly relationship between Egypt and Greece is a key pillar to preserving the security and stability of the Eastern Mediterranean and countering the threats stemming from irresponsible policies that support extremism and terrorism.”

Greece and Italy earlier signed an agreement on maritime boundaries on 9 June, establishing an exclusive economic zone between the two countries and resolving longstanding issues over fishing rights in the Ionian Sea.

The recently-signed agreement has paved the road for the Greek-Egyptian agreement and how both countries would gain from signing the agreement for an Exclusive Economic Zone (EEZ).

Dendias said the deal is “historical” and that it materialised following long rounds of negotiations, adding that the agreement ensures cooperation between both countries.

The process of negotiating exclusive economic zones (EEZ) between Egypt and Greece was launched over three years ago during a visit by President Abdel-Fattah El-Sisi to Athens, where he and then Greek prime minister Alexi Tsipras agreed that to help each country benefit from the possible resources of its national waters an agreement needed to be signed.

According to Nikoaos Garilidis, the Greek ambassador to Cairo, over 13 rounds of negotiations have been held between Cairo and Athens over the past three years.

The Egyptian-Greek deal was inked in accordance with the law of the sea and respects all neighbouring relations.

“The deal is the exact opposite of any other illegitimate thing like what was signed between Turkey and Tripoli. That deal was baseless,” he added.

In November 2019, Turkey and the Prime Minister of the Government of National Accord (GNA) Fayez Al-Sarraj inked a memorandum of understanding on maritime boundaries in the Mediterranean Sea.

In response to the Egypt-Greece maritime demarcation deal, Turkey claims it falls in the area of Turkey’s continental shelf, Turkey’s foreign ministry said on Thursday.

Reuters reported the ministry as saying that Turkey considers the agreement null and void and that the deal also violated Libya’s maritime rights.

Egypt, a close ally to Greece and Cyprus, has had strained relations with Turkey since the 2013 ouster of Egypt’s late Islamist president Mohamed Morsi, a close ally of Turkish President Tayyip Erdogan’s government.

Relations further deteriorated recently over Turkey’s intervention in Libya and a signalled military intervention by Egypt in the war-torn country.

What escalated the tension was the 2019 memorandum of understanding on maritime boundaries in the Mediterranean Sea signed between Turkey and Libya’s GNA.

Five countries including Egypt, Greece, and Cyprus called on the United Nations not to register the maritime boundaries deal, describing it as “illegal”, particularly after the Speaker of the Libyan House of Representatives Aguila Saleh, in his letter to the UN, rejected the agreement.

As a result of the “illegal” agreement, a seismic survey carried out by Turkey from 21 July to 2 August which Egypt said represented a “violation and an attack on sovereign rights” and further escalated tensions between the two countries.

In a statement by the Egyptian foreign ministry on 2 August, foreign ministry spokesman Ahmed Hafez said that Egypt objects to the Turkish seismic survey, saying it overlaps with Egypt’s exclusive economic zone.

Hafez said the encroachment violates the UN convention on the Law of the Sea and international law. The statement added that Egypt does not recognise the outcomes or implications that may entail from Turkey’s activity in the area of overlap.

The Turkish move has, moreover, stirred a dispute with Greece and Cyprus over drilling rights in the Mediterranean, with Athens stressing it will do “whatever is necessary” to defend its sovereign rights in response to Ankara’s planned move.