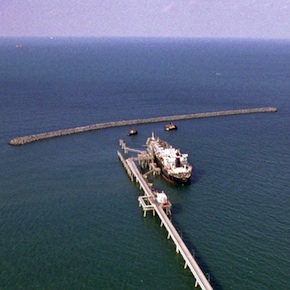 Egypt is slowly moving closer to restarting LNG exports following a deal with Shell to raise the volume of gas sent to the Idku LNG plant.

Shell cut a deal with the Egyptian government in mid-September to send 3.54 million cubic metres per day to Idku from the company’s gas fields to compensate for some of the rising debt Cairo owes to it in receivables, according to a leak from the Ministry of Petroleum reported in the Egyptian media.

Shell would not confirm or deny reports that gas volumes to the terminal have already been increased, but people working for the country’s energy authorities say the negotiations suggest that Idku will begin operating more regularly soon.

“The trains are operational but processing gas at a very low rate of a few cargoes per annum. We are reviewing the various options for this asset with our partners,” said Shell Middle East and North Africa spokesman Nureddin Wefati.

An engineer working for Egyptian Natural Gas Holding Co. (EGAS), who wished to remain anonymous, said that to his knowledge the new level of regular higher volumes had not yet started, but that the plant received a one-off shipment of additional gas in September. He said Idku might require some upgrades and maintenance before higher volumes could be resupplied on a regular basis. EGAS spokeswoman Enas el-Sheikh said supplies to the plant were due to be increased.

The higher volume is still considerably less than the 32 MMcm/d originally contracted. However, it is still an improvement – since 2012, Cairo has appropriated almost all of the gas intended for both the Idku and Damietta LNG plants for domestic use.

Shell’s deal with the government also covers a price increase for gas from Phase 9C of the Burullus field in the West Delta Deep Marine project, a former BG Group asset. Egyptian newspaper Al Borsa reported that prices would be set at $2.50-5.88/MMBtu, the same as gas from Phase 9B. It also said the extra volumes for Idku mean Shell could export an LNG cargo every three weeks.

The EGAS source said the Egyptian government owed Shell $1.3 billion as of July – a sum that has been increased by unpaid receivables from production at the Burullus and Rashid fields. Egypt owes a total of $3.5 billion to IOCs.

A source at the Ministry of Finance, who wished to remain anonymous, said payments to gas producers have been made more difficult by the country’s dollar shortage. Egypt’s Central Bank has not been able to source enough dollars to make the promised payments.

The ministry was not providing assistance to the government’s energy authorities to tide them over during the dollar shortage, the source added.

He said it removed the risk of the company taking legal action against the government, pointing to the long-running arbitration case brought by Union Fenosa Gas over the shutdown of supply to its Damietta plant. It will also provide an incentive for Shell to produce more at a time when the government was struggling to meet its financial obligations, Bakr added.

“They are negotiating with Cyprus and, I believe, with Israel to import gas by pipeline because it’s cheaper than imported LNG,” Bakr said, adding that Cairo is as interested in using its neighbours’ gas reserves domestically as it is in using them to support its LNG exports.

Local newspaper Daily News Egypt reported last week that the government had promised Shell it could buy gas from Cyprus to bring Idku up to capacity again, but the report has met with scepticism.

The EGAS source said the proposal for a pipeline between Cyprus and Egypt would take years to complete because no movement has been made on it and Cyprus does not yet have a producing gas sector.

Furthermore, he said Shell was reluctant to make any concessions to the government unless Cairo committed to and adhered to a payment plan to start bringing down its liabilities in the country.

Shell halted work on Phase 9B in March to try and convince the Egyptian Ministry of Petroleum to pay off some of its receivables.