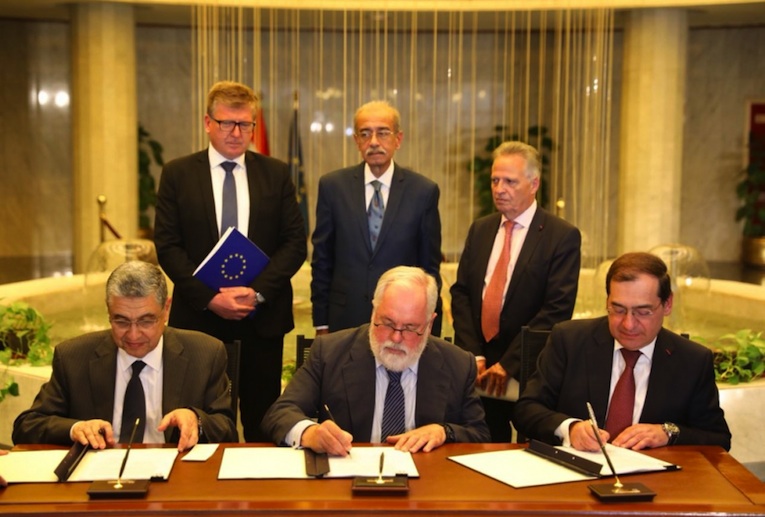 Egypt and the European Union continue to share strong bilateral energy relations as well as an understanding of the opportunities and challenges facing the region. Partnership in the energy sector comes on top of the areas of common interest between Egypt and the EU in view of its importance as a driver of economic growth and development for both parties.

In continuation of the fruitful partnership between Egypt and the EU, the Government of Egypt welcomes the high profile visit of H.E. Mr. Miguel Arias Cañete, EU Commissioner for Climate Action and Energy, to Egypt during the period from 22-24 April 2018. During this visit and to reinforce the joint close relations, Mr. Arias Cañete will be welcomed by His Excellency Mr. Abdel Fattah El Sisi, President of the Arab Republic of Egypt. High level talks with H.E. Eng. Sherif Ismail – Egypt’s Prime Minister as well as H.E. Eng. Tarek El Molla – Egypt’s Minister of Petroleum and Mineral Resources have also taken place. The visit’s comprehensive agenda covers a number of key events, including the inauguration of first-ever Egypt – EU Sustainable Energy Business Forum & Exhibition, and a visit to the Zohr field onshore facilities. H.E Eng. Sherif Ismail witnessed today the signature of a Memorandum of Understanding (MoU) for strategic partnership on energy between Egypt and the EU. This MoU culminates extensive discussions held at ministerial levels, a number of high-level reciprocal visits, and a series of coordination meetings and comprehensive deliberations. The signing of the MoU represents a major milestone and a step change in the fruitful relationship between Egypt and the EU. It also reflects a common understanding of the importance of enhancing energy bilateral cooperation between Egypt and the EU, which will contribute to fulfilling the EU’s strategic objectives to enhance security of supply and diversification as well as furthering both parties’ sustainable development and accelerated transition to a low-carbon economy. The recent record achievements realized by Egypt in the energy sector coupled with Egypt’s strategic location and extensive infrastructure all leverage Egypt’s position to become a major player of energy supply for the Euro-Mediterranean region. In this regard, the EU recognizes Egypt’s active participation in the ongoing Euro-Mediterranean energy cooperation and the country’s growing pivotal role in energy supply and transit to the Euro-Mediterranean energy market. This visit further paves the way for building on the ongoing strategic energy dialogue with the EU, including working jointly on the following areas during the period from 2018 to 2022:

EU could provide as much as EUR 3.8 bn in financing to help Egypt transform into regional energy hub as two sides ink energy cooperation agreement: Egypt and the European Union signed a memorandum of understanding on energy cooperation yesterday that is widely expected to pave the way for Egypt to become a gas export hub to Europe. Under the four-year agreement — which covers cooperation on electricity, as well as oil and gas — the EU and Egypt will work together to help the country realize its goal of becoming a regional hub for LNG exports through continued support and the adoption of new energy efficiency strategies, the EU and Egypt said in a joint release. Egypt could receive as much as EUR 3.8 bn in funding for energy projects, EU Energy Commissioner Miguel Arias Cañete told the press yesterday.

Egypt becomes part of EU energy security framework: The EU will also provide Egypt with support on renewable energy through “technological, scientific, and industrial cooperation… [as it] recognizes Egypt’s active participation in the ongoing Euro-Mediterranean energy cooperation and the country’s growing pivotal role in energy supply and transit to the Euro-Mediterranean energy market,” the statement said, adding that the agreement will “contribute to fulfilling the EU’s strategic objectives to enhance security of supply and diversification.”

Background: The agreement was signed during Cañete’s visit to Cairo, which wraps up today, during which he has been meeting with top state officials, including President Abdel Fattah El Sisi, and the heads of European oil majors in Egypt to discuss ways to further boost energy cooperation. Energy cooperation talks with the EU had started in December, after Cairo reached a preliminary agreement with Nicosia to establish a pipeline connecting the Cypriot Aphrodite field to one of Egypt’s liquefaction plants in Idku or Damietta for re-export to Europe. Egypt’s Dolphinus Holdings has also signed a similar-style agreement with Israel worth USD 15 bn. The EU has extended Egypt EUR 300 mn in energy support grants so far, according to an EU handout picked up by Al Mal. Oil Minister Tarek El Molla had previously said that Egypt would be ready to export natural gas by year’s end, once new fields, including the supergiant Zohr, begin feeding more output into the grid.