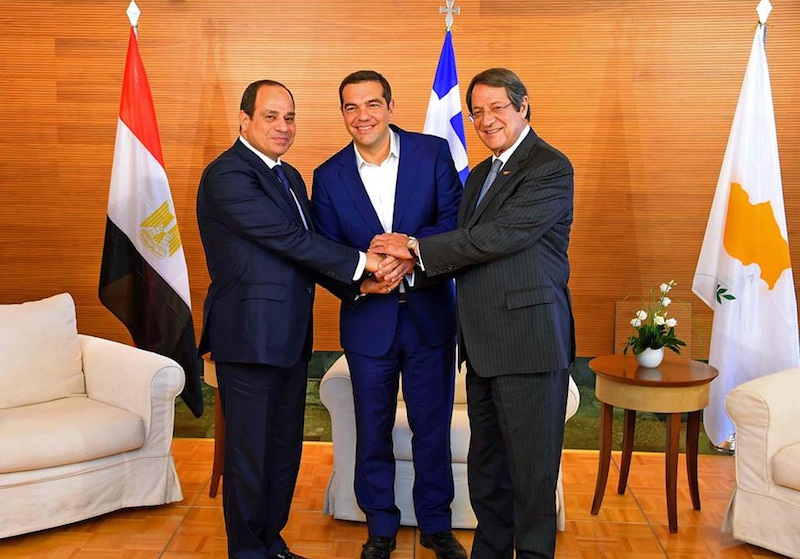 The leaders of Egypt, Greece, and Cyprus agreed yesterday to establish an East Mediterranean Gas Forum, Ittihadiya said. The forum — which will be headquartered in Cairo — will include among its members all countries that produce and import EastMed gas and work to closely coordinate the region’s policies on gas exploration and management to guarantee the mutual benefits of all the parties involved.

This came as Egypt and Greece gave Cyprus their blessing to push forward with gas exploration plans in the EastMed, despite objections from Turkey. “We have clearly expressed our support for Cyprus in its efforts to capitalize on the sovereign rights deriving from International Law regarding (offshore deposits) and to make progress in their exploitation,” Greek Prime Minister Alexis Tsipras told the press yesterday, the Associated Press reports.

The three also signed yesterday MoUs to boost cooperation on investment, SMEs, education, customs, and social security. The agreements were signed during a tripartite summit in Crete yesterday at which the leaders of Greece and Cyprus both expressed interest in projects in the new capital and the Suez Canal Economic Zone.

President Abdel Fattah El Sisi sat down with both leaders separately on the sidelines of the summit for discussions that centered around energy cooperation, economic ties, and regional issues, according to a transcript of his remarks at a press conference later.