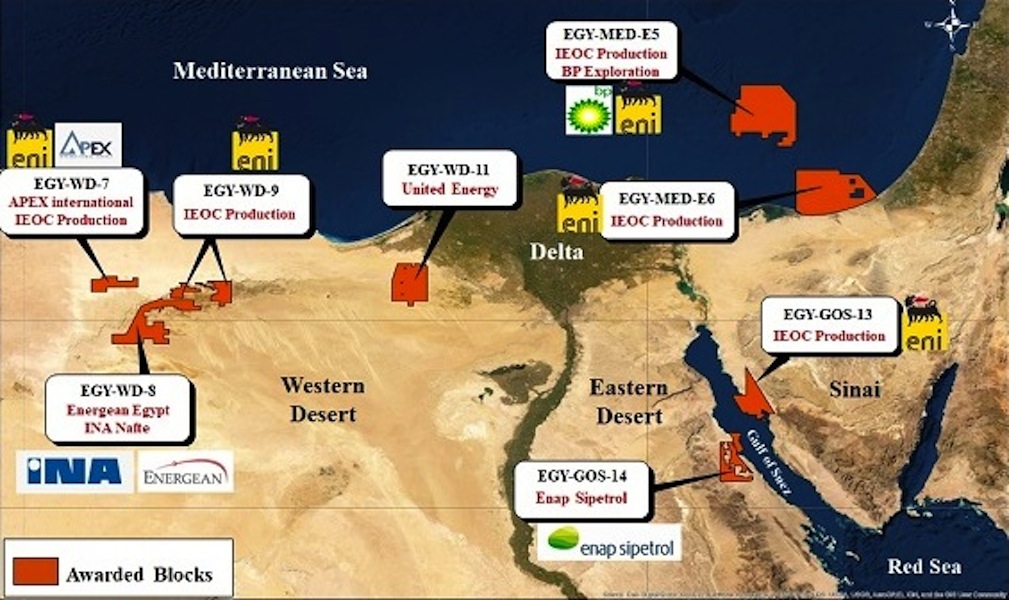 Seven international companies were awarded exploration and production licenses for eight oil and gas concessions in the Mediterranean, the Western desert, and the Gulf of Suez, with a minimum investment value of c.USD 250 mn, the Oil Ministry said today. The licenses were awarded to Eni, BP, Apex International, Energean, United Energy, INA Naftaplin, and Enap Sipetrol.

His Excellency Engineer Tarek El Molla, Minister of Petroleum and Mineral Resources, announced the results of the first digital global bid round for oil and gas exploration and exploitation in the Mediterranean, the Western Desert, and the Gulf of Suez; Which was previously announced by the Egyptian General Petroleum Corporation (EGPC) and the Egyptian Natural Gas Holding Company (EGAS) through the Egypt Upstream Gateway; where 8 blocks (two in the Mediterranean, four in the Western Desert, and two in the Gulf of Suez) were awarded to ENI, BP, APEX international, Energean Egypt, ENA Nafta, Sipetrol, and United Energy.

With a total area estimated at 12.3 thousand km2, with a minimum investment in Exploration periods estimated at $250 million to drill a minimum of 33 wells, this is in addition to the $23.7 million signature bonus . Eng. Tarek El Molla indicated that considering the current global conditions related to the Corona pandemic, this bidround has achieved positive results that result in pumping more investments during the coming period. The Egypt Upstream Gateway has contributed to facilitating international companies access to all geological and geophysical data for all blocks, represented by about 42 3D Seismic Surveys , approximately 2894 2D seismic surveys, and about 118 wells.