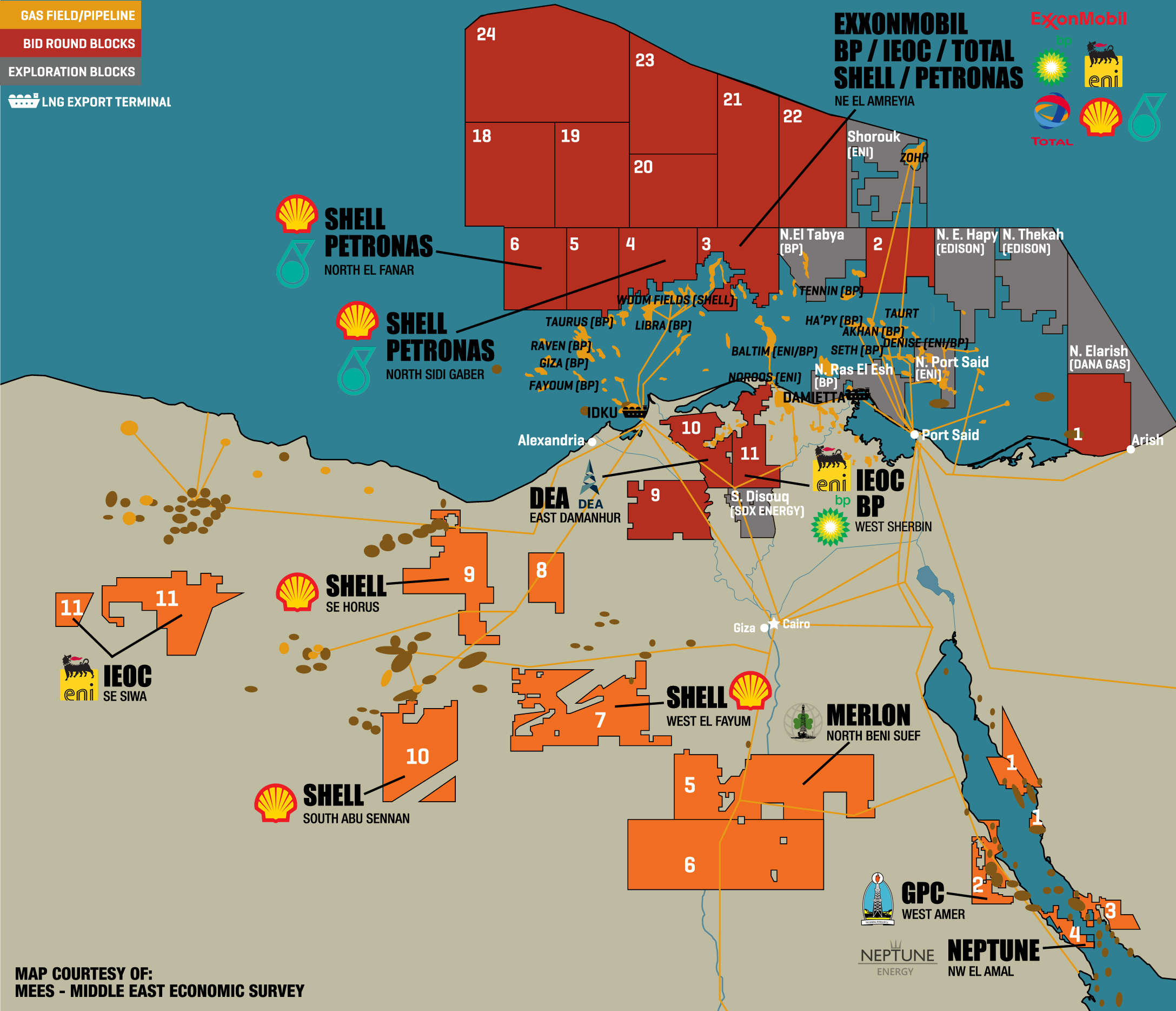 Royal Dutch Shell, Eni, BP and Exxon Mobil were among the winners in one of Egypt’s largest ever oil and gas exploration tenders on Tuesday, as the country looks to sustain an investment upswing spurred by major discoveries.

The awards marked Exxon Mobil’s entry into gas exploration in Egypt, while Shell was handed the most concessions, three for oil and two for gas, at an annual petroleum show that Egypt has used to promote itself as a hub for gas production and trading in the Eastern Mediterranean.

BG (Shell) and Petronas won the exploration rights to the Offshore Mediterranean Block 4 – North Sidi Gaber with a $10 million signing bonus, $60 million financial commitment, conducting a 1500 km2 seismic survey and the drilling of one well.

Merlon Petroleum was awarded exploration rights to Block 5 – North Beni Suef in the Eastern Desert with a $3.2 million signing bonus, $36 million investment and the drilling of eight wells.

The General Petroleum Company (GPC) won the exploration rights to the Eastern Desert Block 2 – West Amer with a $5 million signing bonus, $1 million investment and the drilling of ten wells.

Merlon Petroleum was awarded exploration rights to the Offshore Gulf of Suez Block 4 – NW El Amal with a $11 million signing bonus, $34.5 million investment and the drilling of three wells.

Egypt expects investments of at least $750 million to $800 million in the first stage of exploration in the total of 12 concessions announced, Petroleum Minister Tarek El Molla said.

The Egyptian Natural Gas Holding Corporation’s bid round, which was the largest in its history, included border areas in the Mediterranean Sea as well as land areas in the Nile Delta.

Five gas exploration concessions were awarded – in which 20 wells will be drilled – to Shell, Exxon, Petronas, BP, DEA and Eni, the head of Egypt’s state gas board said.

Eni’s discovery of the giant Zohr field in 2015, the largest in the Mediterranean and estimated to hold about 30 trillion cubic feet of gas, has raised interest in exploration in Egypt.

The country has reached maritime demarcation agreements with several countries in the region in its push over recent years toward increased oil and gas exploration.

Executives at the forum, which was attended by the CEOs of companies including BP and Shell, said Egypt’s advantages as a hub include well-developed infrastructure, established industry expertise, strong local demand, and the country’s strategic location between Europe and Asia, allowing it to send gas west or east depending on markets.

They are also encouraged by Europe’s desire to diversify gas supplies and find alternative suppliers to Russia, and to reduce carbon emissions.

Egypt hopes to tap long underutilized liquefaction plants, where gas is turned into LNG, to export supplies across the Mediterranean along with that of its neighbors, including Israel, which said it would pipe gas to Egypt later this year.

“I think we’re starting to see much more robustness for this concept,” said Gasser Hanter, Shell’s country chairman, in reference to the concept of Egypt as an emerging hub.

“You’re seeing the intergovernmental agreements being sorted out, you’re seeing the deregulation of the gas market, a lot of confidence in the economy, in Egypt, that is boosting the investment in the upstream.”

However, executives also said longer-term challenges include geopolitical tensions in the Eastern Mediterranean, the need to further develop infrastructure, and competition from other suppliers including Russia and the United States.