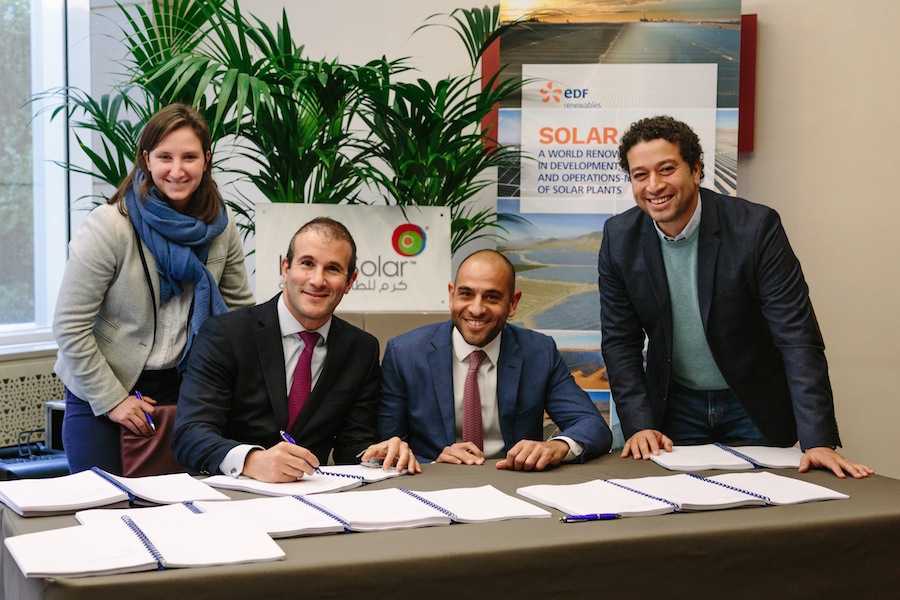 EDF Renewables becomes a strategic shareholder of KarmSolar, a developer and supplier of solar power in Egypt.

EDF Renewables, the renewable energy subsidiary of EDF Group and KarmSolar, a developer and supplier of solar power in Egypt, are entering into a strategic partnership in the development of distributed solar in Egypt. As part of this partnership, EDF Renewables is injecting capital to take a strategic equity stake in KarmSolar, through a reserved capital increase. This investment will allow KarmSolar to implement its ambitious development plan in the country. It consists in expanding its portfolio of solar plants providing power to commercial, agricultural and industrial clients through Power Purchase Agreements (PPAs) or distribution contracts.

This investment contributes to EDF Group’s goal under the CAP 2030 strategy of doubling its renewable energy capacity worldwide to 50 GW net between 2015 and 2030.

KarmSolar currently holds a portfolio in Egypt close to 170 MW of solar PV plant projects in operations, under construction and advanced development. These solar projects take part in the Egyptian government’s target of generating 42% of its electricity from renewable sources by 2035.

For more than 10 years, EDF Renewables has been providing renewables solutions to environmentally-conscious Commercial & Industrial clients such as Microsoft, Procter & Gamble, Kimberly-Clark, Yahoo, Nivea, Danone, Coca Cola, Nestlé, Wahaha, or Tesco, in the US, France, China and more recently in the United Kingdom.

Frederic Belloy, Executive VP International Operations for EDF Renewables, said: “We are delighted to establish this partnership to support Karm Solar in the delivery of its innovative business model. This partnership is fully in line with EDF Renewables strategy to offer relevant solutions helping Commercial & Industrial customers achieving their low carbon ambitions through the production and consumption of a competitive renewable energy. This investment is also in compliance with EDF international strategy, North Africa representing a great potential for development. Following the commissioning of our 130 MWp solar power plants in Benban recently, it further strengthens our long-term development strategy in Egypt.”

“This investment constitutes a new major step to support our growth, and we are confident that EDF Renewables is the right partner to help take KarmSolar to the next phase of its expansion.”, said Ahmed Zahran, CEO, KarmSolar. “Throughout our conversations with EDF Renewables,

it was very clear that they believed in what we want to achieve – which is to promote renewable energy and to make solar power more accessible.”

Amr El Sawaf, Chairman of KarmSolar, said: “This is a major milestone in the development of our company, that ambitions to propel its expansion forward. EDF Renewables is not only an investor, but a strategic partner whose global expertise will extend KarmSolar’s local reach and further increase its technical capabilities. It is envisioned that this investment will also boost the private Egyptian solar market and thus support the government in implementing its vision of becoming a renewable energy hub for the region.”