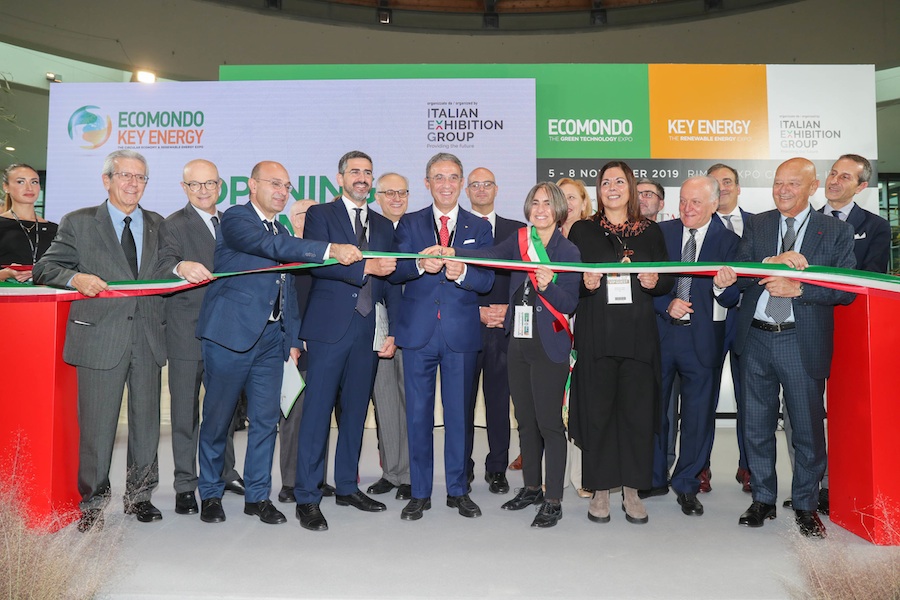 Italian Minister for the Environment Costa: “Ecomondo is the most important Green Ecology Show in the World”.

Also representing the Government, Riccardo Fraccaro, Undersecretary to the Presidency of the Council of Ministers, and Antonio Misiani, Undersecretary for Economy and Finance; Message from Stefano Patuanelli, Minister for Economic Development.

From new models of circular economy development to technological solutions for managing and protecting resources. ECOMONDO and KEY ENERGY, alongside DPE and SAL.VE, opened their doors at Rimini Expo Centre to generate Italian Exhibition Group’s vast international platform aimed at favouring the growth of an innovative entrepreneurial ecosystem, the only one able to lead to building a more sustainable future.

Covering all the Expo Centre’s 129,000 square metres, 1,300 companies from 30 different countries are in attendance at Ecomondo, Europe’s number one circular and green economy event, Key Energy, the renewable energy show and Sal.Ve., the biennial Environmental Motor Show, which are also being joined by the first edition of DPE – Distributed Power Europe, an event dedicated to power generation.

The opening ceremony was held this morning in the South Hall. Entrusted to Sergio Costa, Minister for the Environment and the Protection of the Territory and Sea, the event was also attended by Riccardo Fraccaro, Undersecretary to the Presidency of the Council of Ministers, Antonio Misiani, Undersecretary for Economy and Finance, Paola Gazzolo, Emilia-Romagna Regional Councillor for Environmental Policies, Anna Montini, Rimini’s Councillor for the Environment and Lorenzo Cagnoni, President of Italian Exhibition Group,.

In his introductory speech, the latter explained how “we have perceived and consolidated today’s highly topical themes ahead of time here.  It is what European exhibition leaders, like Ecomondo, are supposed to do.”

Councillor Montini recalled Rimini’s efforts on the environmental front: “The Optimized Bathing Conservation Plan to protect our sea is a crowning achievement. In Rimini, the sea is synonymous of environment and economy. And here we have a clear example of how these two aspects can co-exist.”

In Regional Councillor Gazzolo’s opinion: “We are in the land of sustainability, a land that proves how good sustainability can be done. And here we are at a highly important international event where it is interesting to see how many good practices there are around us.”

Undersecretary Antonio Misiani wanted to pay his compliments to Italian Exhibition Group: “Thanks go to the Ecomondo team: you create attention and give visibility to the Green and Circular Economy sector, which is not only one of Italy’s first-rate sectors, but also places our country in a position of leadership on a European scale.  The first real hope for economic recovery and for the creation of new enterprises.”

According to Undersecretary Riccardo Fraccaro “The Green New Deal has finally been included in the last budget law. If we can manage to impose the Green Rule in Europe, we will be able to recreate that lost European dream, address the new generations and practice economy because the most important aspect is that now, as never before, economy, growth and development coincide with sustainability.”

Minister Costa concluded: “It is with enormous Italian pride that I am here, for the second time, to inaugurate Ecomondo, the most important green economy and environmental technology show in the world that is getting bigger every year. It means that Italy is there on the international panorama, and not just in terms of Europe. Ecomondo is the place for dialogue and confrontation and, as the Minister for the Environment, I am here to speak not only in formal but also in substantial terms, by going round the stands, conversing with the companies, in order to create together a vision in which economy and environment can grow in unison.”

The opening ceremony was followed by the General Situations of the Green Economy, this year entitled Green New Deal and the climate challenge: objectives and itinerary until 2030, where ideas and proposals are bound to emerge to support and encourage a change that aims to sizably cut greenhouse gas emissions and launch new development and new jobs.  Opening the work was Edo Ronchi from the National Green Economy Council.

The four days of the show offer a full programme of international seminars organized by scientific committees under the guidance of Fabio Fava (Ecomondo) and Gianni Silvestrini (Key Energy), with over one thousand speakers.