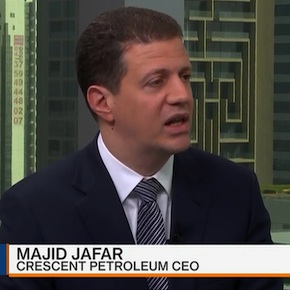 Crescent Petroleum Co., an oil and natural gas producer in Egypt and Iraq, expects crude prices to improve this year as supply becomes more in line with demand.

The U.K.’s decision to leave the European Union won’t have a lasting effect on crude prices and London will remain a center for international oil and gas companies, Chief Executive Officer Majid Jafar said in an interview in Dubai on Sunday.

Oil fell 4.9 percent in New York and London Friday after the U.K. voted to exit from the 28-member bloc. Benchmark Brent crude settled at $48.41 a barrel.

“We’ll start to see oil prices creeping back up,” Jafar said. “I wouldn’t be surprised if we even hit $60 this year.”

Crude has gained about 30 percent this year on supply disruptions from Nigeria to Canada and falling production in the U.S. Members of the Organization of Petroleum Exporting Countries have produced crude without limits since 2014 in an effort to maintain market share and force higher-cost suppliers such as U.S. shale to reign in production.

“If we look at the supply-demand balance, it’s actually tightening,” Jafar said. “That will continue as the year goes forward.”

The Sharjah, United Arab Emirates-based company sees opportunity for growth in Egypt and Iraq, Jafar said. Crescent operates in those countries through Dana Gas PJSC, in which it has a 19 percent stake.