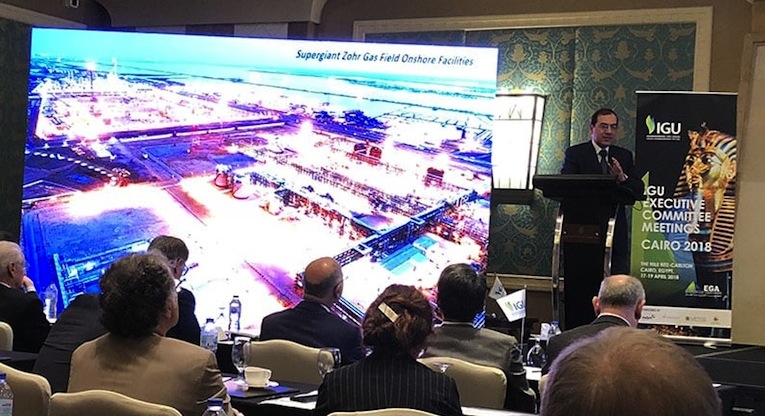 Egypt is determined to drive and manage its rapidly expanding energy sector and ensure that the new liberalised industry and systems are run on international standards, Egypt’s Petroleum Minister Tarek El Molla has said.

Speaking at the International Gas Union (IGU) Workshop in Cairo on April 19, El Molla said his department would put Egypt at the forefront of natural gas developments.

Since the discovery of the first gas-field Abu Madi in 1967, Egypt’s gas reserves have increased dramatically, particularly during the last two to three years, with the development of giant Zohr being the game-changer.

Egypt’s oil and gas sector is being developed on the basis of three key pillars, with corresponding action areas:

In the four years between 2013 and 2017, Egypt signed successfully a total of 83 exploration and production agreements with international oil companies (IOCs), with minimum investments of around $15.5 billion. In the meanwhile, it managed to reduce its historic debt to the IOCs to $2.3 billion, which is the lowest it has been over this period.

The government has embarked on a massive programme to cut energy subsidies dramatically over the next three years and increase fuel prices to reflect real production costs. This will reduce Egypt’s budget deficit and will lead to a more efficient and profitable oil and gas sector and a more sustainable future for the country. Following gas sector liberalisation, it will also enable the private sector to compete on a more equal footing.

But the greatest achievement was bringing the giant Zohr gas-field online within 28 months from discovery. Securitisation of payments was key in getting drilling started early. An important challenge was dealing with hydrogen sulphide. This needed special pipeline alloys and installation of desulphurisation units in the onshore gas treatment plant, which when completed will comprise of 8×350 million cubic feet per day (mcf/d). A lot more needs to be done to complete phases two and three, but the project is on track to achieve 2.7 to 3.0 billion cubic feet per day (bcf/d) by the first quarter of 2019. With this, gas production will exceed consumption which is more than enough to fully utilise the Damietta LNG plant’s liquefaction capacity of 0.7 bcf/d.

This will help Egypt achieve self-sufficiency by the end of 2018, stopping LNG imports by June, and resume LNG exports next year. It is something that attracted the interest of the EU, and has led to the signing of a Memorandum of Understanding (MoU) for energy cooperation. Egypt’s recent major achievements in this sector, combined with its strategic location, make it ideal to become East Med’s hub for the export of energy to Europe.

This is also supported by bilateral agreements with its neighbours Israel and Cyprus to supply gas either for Egypt’s domestic market or for liquefaction at its LNG plants and export. However, these face a number of commercial and geopolitical challenges before they become reality.

Liberalisation of the gas sector, now in progress, is a major step, opening the sector to private companies. It is also providing the conditions to turn Egypt into East Med’s energy hub, something which has now become a major focus of interest in the country. Without a hub the East Med will struggle to export its gas.

The MoU with the EU is the culmination of many discussions and close cooperation over the last few years. It aims to contribute to EU’s strategic objectives of energy security and diversification of gas supplies. It will also assist Egypt to develop its renewables and help it achieve its first strategic pillar of energy security through boosting and diversifying its energy supply.

The EU and Egypt agreed to work together over the next four years to establish Egypt as an energy hub, to promote energy efficiency strategies and policies, promote renewables, provide technological, scientific and industrial support and generally to support Egypt’s energy sector. It is estimated that this support may amount to €3.8 billion between 2018 and 2022. The EU has already provided Egypt with €300 million in energy support grants so far.

“Egypt can lead the way of the clean energy transition in the Eastern Mediterranean and thus contribute to the Paris climate goals and the worldwide decarbonisation effort,” said Commissioner Miguel Arias Canete, who signed the MoU on behalf of the EU. “The EU stands ready to support Egypt in its energy market reforms and to boost sustainable energy investment.”

The current organisational structure is outdated and it is in need of reform he said. It has become ineffective and it is riddled with conflicts of interest, such that state companies cannot compete, even though they employ more than 240,000 people. The sector needs properly trained people, proper organisation and proper governance.

The ministry is in the process of implementing a plan to fast-track future leaders. It is assigning identified high-flyers to IOCs for six to 12-month periods to receive training to international standards. It is a long journey, but the ministry is optimistic. It has the full support of the IOCs and the World Bank, which are also providing consultants to advise on restructuring.

The petroleum ministry has embarked on a modernisation project in order to be prepared. To be ready for self-sufficiency and exports Egypt will also need more pipelines, storage facilities, expansion and modernisation of its ports.

The minister said that Egypt is looking to attract as much as $10bn in new foreign investment in the oil and gas sector in the financial year 2018 to 2019, as a result of new discoveries in the East Med. Most oil and gas majors operating in the country, including ENI, Shell, Edison and BP, announced recently plans to expand their existing activities in Egypt.

Earlier in April, El Molla confirmed that Egypt is looking beyond Zohr. The country is preparing to announce new licensing rounds for 10 to 11 blocks in the Mediterranean during the second quarter of 2018 and more in the Red Sea by the end of 2018, as well as speed up production from recently discovered fields.

In addition, the Egyptian government approved a decree in April allowing the Egyptian General Petroleum Corporation (EGPC), the Italian Egyptian Oil Company (IEOC), and BP to explore and develop oil fields in the Nile Delta.

Dr. Charles Ellinas is a nonresident senior fellow at the Global Energy Centre of the Atlantic Council.
@CharlesEllinas