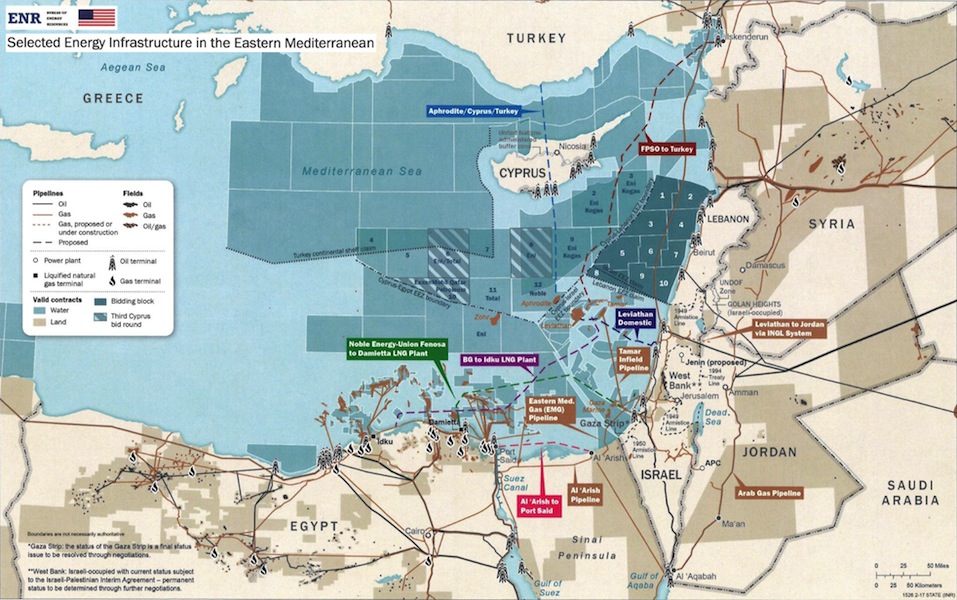 Gas has been discovered in the East Mediterranean for a decade, yet most remain undeveloped. This article reviews these discoveries and share some risks & various technical, commercial & political challenges facing their full development.

Ever since the discovery of “Tamar” and “Leviathan” gas reserves within the Israeli EEZ, “Aphrodite” within the Cypriot EEZ, the discovery of the “Zohr” Reserve in Egypt, followed by Calypso and Glaucus-1 in Cypriot EEZ, all attention has turned to the EastMed as a gas supply hub. This paper will put the challenges facing the development of EastMed gas under the spotlight. As the development and production of natural gas finds in the EastMed region are still in the making and rapidly evolving, the paper will only provide an analysis overview of the EastMed current and expected near future challenges. Thus, enabling readers to follow-up on their own any further progress and developments on the geopolitical and commercial arena, particularly following the establishment and functioning of the East Mediterranean Gas Forum, EMGF & its Gas Industry Advisory Group, GIAG.

The discovered reserves in the EastMed are in excess of the domestic consumption of the respective country where they are found, posing economic and commercial challenges to its monetization. How much gas is really there? Where will it end up? What are the technical, commercial and geopolitical challenges in the way of EastMed gas development? Technical developmental alternatives ranging from pipeline to shore, sea bed topography, floating liquefied natural gas, FLNG or floating compressed natural gas, FCNG cause numerous technical development challenges. Not to mention the geopolitical challenges as a result of long political and diplomatic obstacles between the countries in the region. This paper will cover each country’s (Egypt, Cyprus, Israel, Lebanon and Palestine) geopolitical, technical and commercial challenges.

Stemming from the fact that there are lots of exploration and discoveries happening in the region where you have producing countries, consumers and transit countries. There is a need to work together and collaborate to ensure the work is done to have collective policies in place that benefit everyone. Rather than trying to divvy up slices of a pie parties need to try to work together to make the pie bigger for everybody: synergies with existing infrastructure; looking at the most appropriate collective monetization options; seeing where the region is going in terms of supply and demand; information sharing and all that helps rather than proposing individual initiatives.

From the Cairo Declaration establishing EMGF, Jan 2019: The Egyptian Minister of Petroleum and Mineral Resources, the Cypriot, Greek, Israeli, Italian, Jordanian and Palestinian Ministers of Energy convened in Cairo on 14 January 2019 to discuss establishing the East Mediterranean Gas Forum (EMGF). The Ministers recognized that significant offshore gas discoveries in the Eastern Mediterranean will have profound impact on the region’s energy and economic development, and that new discoveries and exploitation of significant gas fields are of vital importance to the region’s energy security.

They also stressed the importance of encouraging adequate involvement and contribution of the gas industry and the private sector including investors, traders, financing entities and other stakeholders in this regard, and would be invited to contribute to the Forum’s activities and organizational bodies as part of a permanent Gas Industry Advisory Group.

Two ministerial meetings have been held in Cairo in January and July 2019; and the kick-off meeting of the Gas Industry Advisory Group was held on November 6th.

It is a solid truth of the energy business that resources only have a value when someone is ready and willing to buy them. A fine illustration of this lies in the circumstances surrounding the extensive volumes of gas discovered in the eastern Mediterranean but as yet still undeveloped. Over the past decade, billions of cubic meters of gas have been found in the Levant basin — from the Zohr field off Egypt, to Leviathan off Haifa in Israel, and the latest discovery, Glaucus, in the waters off the coast of Cyprus. In all these areas and off the shores of Lebanon and Syria there is probably still more to be found that has not been explored at all.

Unsurprisingly, the development and the ownership of much of the gas is disputed. Turkey, still pursuing its longstanding claim to Cyprus, is following an openly confrontational policy, disputing Cyprus’s claim to an exclusive economic zone in the waters off the island and sending in its own exploration vessels. Meanwhile, the lack of a diplomatic relationship between Lebanon and Israel means there is no agreement on the offshore boundary line between the two countries. Various export routes have been discussed. Some Israeli gas will flow to Egypt and more could be processed and transported as liquefied natural gas, but such an arrangement would be highly vulnerable to any deterioration in relations between the governments of Egypt and Israel. An LNG facility in Cyprus, gathering gas from across the region, is possible but expensive. A pipeline from the island through Turkey would have obvious political problems. A subsea line to Greece is also possible, but is literally a “pipe dream” — the line would cost an estimated $9.5bn. The costs are crucial because supplies from the eastern Mediterranean will have to compete with those from Russia, Norway, the Caspian, Qatar and the US. With Russia determined to maintain its market share and European gas demand falling, it is hard to see EastMed gas breaking into the market. Costs and the distances involved also make exports to Asia uncompetitive against gas from east Africa, Qatar and Australia.

The answer, therefore, probably lies more locally. Gas exports to Europe or Asia are likely to remain uncompetitive, hence local market may be the only option. Gas can replace coal and oil, on which some of the countries still depend. Establishing a full-scale regional gas grid or power could be supplied from new and upgraded plants in individual countries, and possibly coordinated through a central hub. Close cooperation and collaboration amongst the EastMed countries over increasing digitalization, and automation, collaboration, data sharing, environmental baseline surveys and open digital platforms can improve offshore operations.

Amira El-Mazni is an Independent Gas Expert and Member of GasReg Board of Directors.
Former EGAS Vice Chairman for Regulatory Affairs, team leader of Energy Hub Strategy, which is group 6 of Petroleum Sector Modernization Project. She was responsible for the development of the legal & regulatory framework needed for establishing the Gas Regulatory Authority in Egypt. Prior to joining EGAS in 2005, she worked for Engineering for the Petroleum and Process Industries (ENPPI).

This is an excerpt from "Challenges Facing EastMed Gas", presented at the 10th International Conference of the Egyptian Society of Chemical Engineers, 23-24 November 2019. Click here to view the full paper.