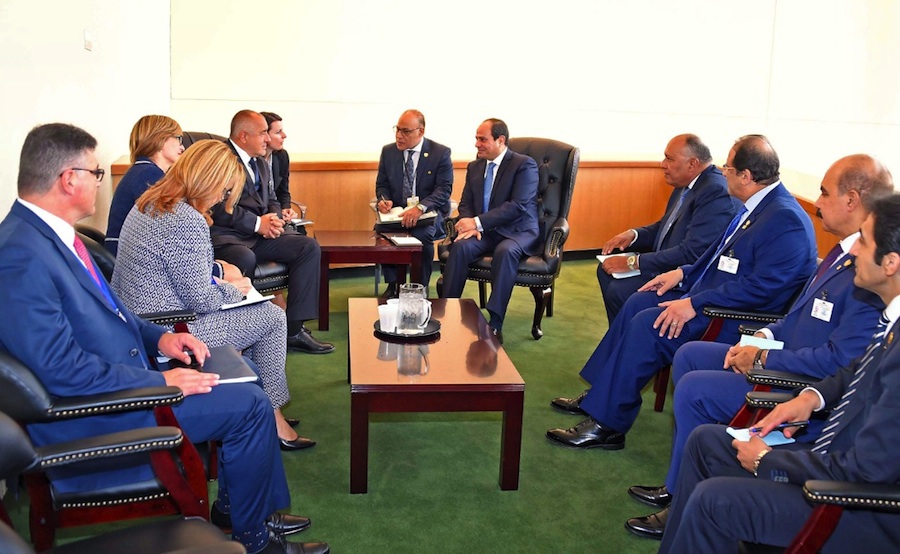 At a meeting in New York with Egyptian President Abdel Fattah al-Sisi, the Bulgarian Prime Minister Boyko Borissov said that Egypt is Bulgaria’s most important economic partner among the Middle East countries and Africa.

Bulgaria accepts Egypt as a potential supplier of natural gas and would benefit from joining its gas project with Greece and Cyprus.

Besides Bulgaria recognizes Egypt as a country playing a key role for stability in the region of the Middle East and Africa and is open for active cooperation with it in the fight against terrorism, cross-border crime and radicalization at all levels, Borissov also said.

Bulgarian Prime Minister Boyko Borissov said that Egypt is Bulgaria’s key economic and trade partner in the Middle East and Africa, citing the increase in trade exchange between the two countries.

Sofia is highly interested in cooperation with Egypt in the energy field, Borissov said during a meeting with President Abdel Fatah al-Sisi on the sidelines of the 73rd UN General Assembly meetings in New York.

The Bulgarian prime minister asserted that Egypt is considered a potential provider of natural gas and his country is interested in joining the Egypt-Greece-Cyprus gas project, a statement released by the Bulgarian embassy in Cairo on Tuesday said.

Sofia is ready to enhance full cooperation relations that are of benefit to both sides in all fields, especially the economy, agriculture, security, tourism, culture, education and others, he added.

The Bulgarian official said his country considers Egypt as a key player in stability of the Middle East and Africa and is ready to actively cooperate with Egypt in combating terrorism and cross-border crimes.