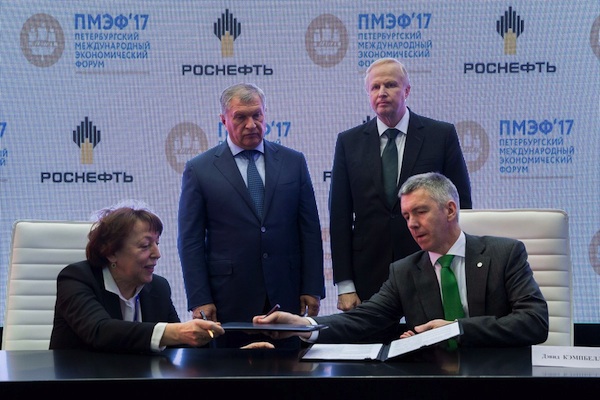 Rosneft and BP have signed an agreement on strategic cooperation in gas and a Memorandum of Understanding (MoU) in respect to the sale and purchase of natural gas in Europe. The documents were signed at the XXI St Petersburg International Economic Forum (SPIEF).

The two companies agreed to develop integrated cooperation in gas and aim to jointly implement gas projects in Russia and abroad focused on gas exploration and production, LNG production, supply and marketing.

Rosneft and BP also reconfirmed their mutual interest in cooperation in European gas marketing. According to the MoU, Rosneft and BP’s wholly-owned subsidiary BP Gas Marketing Limited will enter into a long-term sales and purchase agreement for the supply of natural gas produced by Rosneft in order to ensure delivery of additional Russian gas supplies to European markets starting from 2019. This MoU is another milestone in the development of strategic cooperation between Rosneft and BP.

“Rosneft already is the largest independent gas producer in Russia and intends to further increase production levels in the coming years,” Rosneft CEO Igor Sechin said. “Cooperation with BP would provide Rosneft with both a new efficient gas monetization channel and the conditions required for the development of a new resource base including hard to recover gas reserves.”

“BP is pleased to expand its ongoing relationship with Rosneft through this agreement,” president of BP Russia David Campbell added. “Shifting to gas is one of the pillars of BP’s strategy. It is important in order to meet the increasing demand for cleaner energy. Gas is a growing proportion of BP’s portfolio and by the middle of the next decade we expect around 60% of our production to be gas, compared with around 50% today.”

The parties agree that Russian state support for an effective gas supplies mechanism is key to the successful implementation of the MoU.

(This press release was issued jointly by BP and Rosneft)

BP and Rosneft both have a stake in the Egyptian Zohr offshore project, which Eni discovered and controls 60% of. BP owns 10% while Rosneft owns 30% of Zohr, each with an option to buy another 5% from Eni. (-ed)